This is my working hypothesis — the way I see it as of this moment!!

e-mail from Dr. Barry B Hayes

Concerning the identity of Moore Carter’s father, we have the following record:

(1) On 6 February 1710, Thomas Carter… being very sick and weak of body…made his will which left his estate to his wife and devised …unto my daughter Martha the plantation which I now live on, as long as she lives after my loving wife…. Then,…after my daughter Martha [dies] I give the plantation to my son Alexander…. The will was probated 10 April 1710 (Isle of Wight Wills and Deeds # 2, p. 499). These unfortunately were the only two children mentioned; other children can be proved by deeds and other devices more easily than others.

(2) One son who can be proved without any difficulty was George Carter. On 30 December 1700, Thomas Carter and his wife Magdalen conveyed to …son George Carter… 200 acres, …part of the 400 acres George Moore father of Magdalen… had given to Thomas Carter on 11 August 1673 at …the Red Root Point Branch and the Beaver Dam Branch… (Boddie, Seventeenth Century Isle of Wight, pp. 642-43).

(3) On 20 April 1710, the court took notice of a deed of 22 February 1710 whereby George Moore and wife Jane, George Carter’s grandparents, deeded to Thomas Ward of Surry County 100 acres,…part of a patent of 1,400 acres to Moore in 1669… and adjoining land …lately bought by Ward from Robert Munger…. The witnesses included George Carter, Moore Carter, and their cousin Henry White (named as a grandson in George Moore’s will). See Isle of Wight Deed Book # 2, p. 145.

Below some Carters that have been removed from the list of children as they don’t belong there.

I believe this Edward was not the son of Thomas Carter and Magdalen Moore of Isle of Wight County, Virginia, but instead was the son of another Edward, of Northampton County. This has been demonstrated by genealogist Paul Heinegg:

http://www.freeafricanamericans.com/Campbell_Charity.htm (scroll down to CARTER FAMILY, and then to: “4. Edward2 Carter (Edward1), born say 1680…”

As you can see by following this Carter family, the grandchildren of the Edward who left a 1736 will in New Hanover County were counted as African Americans in North Carolina records. For example, you have Solomon who m. Constantina Roberts (and, by the way, there’s no proof of her maiden name, nor is there proof that Solomon’s father was John, just that he was a grandson of Edward of New Hanover) — if you look at the 1800 Census, Solomon is listed in Duplin County as “other free”, not white, thus was a mulatto, or mixed-race person. Although some descendants want to claim that this indicates Native American ancestry, if you follow the Carter line back (as Heinegg has done), you find them listed as “negro.”

This page has a good summary of the overall history:

Note: “Edward Carter was the fourth largest Dobbs County landowner with 23,292 acres in 1780. He was head of a Dobbs County household of eight “other free,” one white woman, and twenty slaves in 1790. In a most extraordinary move, in 1773 the Dobbs County court recommended to the general assembly that Edward Carter’s daughters be exempted from the discriminatory tax against female children of African Americans.”

This refers to the brother of the Solomon who married Constantina.

Based on all this evidence, I believe Heinegg is correct about this Carter line being African-American in origin.

I notice that you have a picture (which looks a drawing?) of Solomon and Constantina – they appear to be white, which probably means they were very light-skinned African Americans, which is I imagine why they were counted as white in 1790, but as “other free” in 1800. 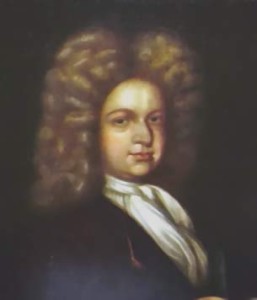 Thomas Carter 1697
“A portrait of Thomas Carter, still in its original Baroque frame, hangs at the headquarters of the Duplin County, North Carolina Historical Society in Rose Hill. On one of the original stretchers was written ‘Thos Carter/Nanticoke/ Ile of Wight 1697.’ The portrait shows a middle aged man with olive skin, a slightly hooked nose and sparkling gray eyes. He has a plump healthy face and is dressed in peruke, dark coat and linen shirt with flowing jabot. In his hands he hold a letter or possibly a bill of lading.” letter from Mr. William Murphy to Dr. Barry Hayes. The portrait had descended through the line of Edward Carter for many generations to Mr. Murphy who had made the gift of the portrait to the library.

I asked Steve how he accounted for the portrait of Thomas Carter. He replied.
“I have not seen this portrait myself, so I can only speculate. I am considering taking a trip down to North Carolina to see if I can look at it firsthand, but here are some possibilities I can think of:

– As you have in your description, he is “olive skinned” – that is not a skin tone normally associated with English people, as you would expect from the Thomas Carter ancestry. But “olive skin” would fit with some Portuguese/African ancestry. To me, the man in the painting could be Hispanic or even Middle Eastern, if I had seen it without an explanation. Or it could be an Englishman, if the painting itself had darkened as it aged (that happens sometimes).

– Perhaps this is really Thomas Carter, but the painting wasn’t passed down from him, it was instead bought by one of Edward’s descendants who assumed it was his ancestor (or wanted people to think he was from the white, not the black Carters) and then passed down from that point in the family with the story ‘Hey, that’s our ancestor.’

– It could be a fake, or a case of mistaken identity. Maybe it is actually a black Carter ancestor (like Edward of Northampton), thus the “olive skin,” but someone decided it must be Thomas, and so made the inscription based on that assumption.

There is a slight resemblance between the man in the painting and the little drawing of Solomon Carter (who m. Constantina), but not so much that it’s possible to say for sure if they are related.

I think the real proof will come when a direct male descendant of Edward Carter of New Hanover has DNA testing. That would settle it, as the paternal line should be clearly either European or African.”

Another point of interest ….”but, let me tell you, the man in the portrait is most certainly a Carter. My grandmother, daughter-in-law of Henry Norfleet Felton, was a Carter and looked almost exactly like the man in the portrait. The nose, the skin, all of it runs in the Carter (and the Williams) lines.” e-mail from Susan Woodward”