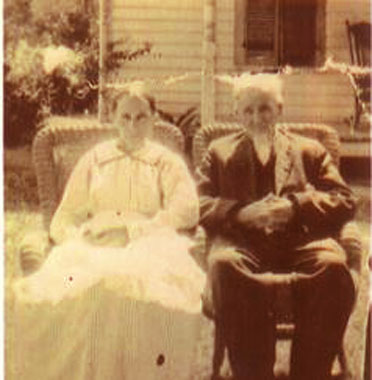 Grandparents of Fred Lassiter husband of Evelyn Rountree.
a granddaughter of Dorsey Rountree,
my great uncle, my grandmother’s brother.

based on the Oral traditions compiled by Edward A Lassiter 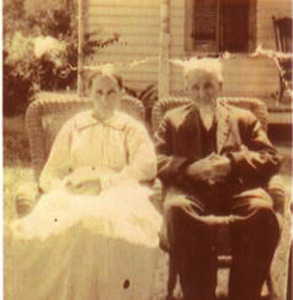 Lucy A and Allen A. J. Lassiter circa 1921 in Water Swamp 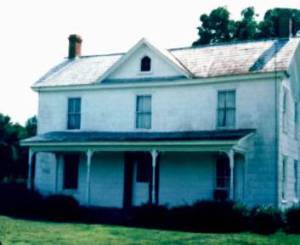 The War Years: Company C (Orapeake Guards), formed in Gatesville in Feb 1862. Lassiters enlisting in Company C are Allen A. Lassiter, Henry E. Lassiter, Josiah Lassiter, Reuben B. Lassiter and Richard H. Lassiter.
Richard died in the war.
On Apr 28, 1862 Camp Mangum, 52 Reg’t North Carolina Infantry (State Troops) Allen Lassiter appears on Company Muster-In and Descriptive Roll from Gates County, shows him born in Gates County, NC, age 22, farmer, 5 feet, 6 inches tall, and was enrolled Feb. 24, 1862 in Gatesville by Julian Gilliam.
When Allen Lassiter mustered into service for 3 years or the war; The Oath of Allegiance to the State of North Carolina is signed Allen “his X mark” Lassiter.
Aunt Annie stated that Allen was at the battle of Seven Pines (also known as Fair Oaks , this battle was fought 31 May- 1 Jun. 1862 east of Richmond ),
at Gettysburg (1-3 Jul. 1863),
at the battle of the Crater ( 30 Jul. 1864 ),
and at Appomattox.
Pension records indicate he received wounds at Goldsboro NC and at Gettysburg.
He was Wounded and taken prisoner at Bristoe Station Virginia (a railroad junction near Manassas) on 14 Oct 1863. Transferred via Old Capital Prison in Washington , DC to Point Lookout , MD.
He was Exchanged 10 Feb 1865 at Coxes Landing, Virginia. and Returned to his unit at Petersburg VA. The formal surrender was on Palm Sunday, 9 Apr 1865.
The stacking of arms and parole was on 12 Apr 1865.
He was Paroled at Appomattox VA where he put his rifle against a tree and took an oath not to take up arms again… and he never did.
He walked about 175 miles to get home to Water Swamp from Appomattox Virginia.
He had no food other than rations issued when he left;
Some folks en route did give him some sweet potatoes to eat.
He vowed to never eat another sweet potato and he never did.

This aversion did not extend to growing sweet potatoes as a cash crop. Potatoes were carted to market and sold,
helping out each fall with Christmas money in later years.
Allen was a truck farmer.
Every Saturday he and his wife would rise at 4 a.m. and take a mule and cart loaded with their farm produce 40 miles to the farmer’s market in Portsmouth, Virginia to sell and then return to Sunbury that afternoon.
He went at such regular intervals that the same stall was reserved for him each week.

Edward writes “Lucy Gordon Lassiter gave me a $20 confederate bill from the family Bible, which she stated, was part of Allen’s pay as a confederate soldier.
She also gave me a silver 3 cent piece, and a silver “piece of eight” with a hole in it that her mother, Lucy Ann Blanchard, wore as a young child.

In Gates County are many tales of Confederate soldiers coming home to visit during the war and having to take evasive action to avoid being taken a prisoner of war.
Lucy Costen of Gatesville told of her grandfather hiding in a hay stack to avoid capture.
Lucy Ann Blanchard told of Yankees raiding for food. [Some were called buffaloes when they were southerners fighting for the union cause.]

Allen and Lucy lived somewhere in the Watery Swamp area until 1893 when they bought a house and farm from George Spivey. They then enlarged the house with a mortgage loan from the Crosses.
Allen and Lucy lived there until their deaths: Allen in 1922, and Lucy in July 1937.

Allen gave Lucy Ann a mantel clock when their tenth child, William Herbert Lassiter was born on 23 Jul 1893 . That mantel clock remains in the family today.

In later years he received a pension based on his service in the Civil War as did his wife after his death.
Allen Lassiter died 4 March 1922 in Gates Co NC.

Allen A. Lassiter left a Will, in which he gave his home farm to his son William, on the condition that he take care of his parents and his two sisters living at home during their lifetime. The land is described as the:

“tract of land on which I now reside and containing sixty-five (65) acres, more or less and being the land that I purchased from Geo. W. Spivey and bounded on the North by lands of Solomon Goodman; on the East by the lands of Genie Pierce, on the South by the lands of Thomas Pierce and Robert H. Blanchard, and on the West by the lands of Mrs. Emeline J. Lassiter [Note: Emeline Jackson was Mrs Reuben Lassiter who was Lucy Ann’s sister  Reubin was Allen’s brother] and the Lands of H. L. Brown….”

Lucy Ann Blanchard Lassiter died 3 Jul 1937 at the home place.
Both Lucy and Allen are buried in their family cemetery on the home place,
together with their son Henry Edward Lassiter, their daughter, Beatrice Williams Lassiter Long, and her husband, Jesse Paul Long.
There are no markers for Henry Edward’s grave.
This farm is the last land Allen Lassiter ever owned.
He sold the timber on the place to Foreman Blades Lumber Company by deed on 26 Aug 1910 for $85.
The deeds indicate several neighbors sold their timber at the same time.
There is another deed from Allen and wife Lucy to S. J. Blanchard of 24 acres of land in Gates County for $374.00 on 14 Jan 1914 [Book 67, page 131].
Apparently he mortgaged his farm the same year [Book 67, page 240] for $600.00 at 6%. The record is noted on 1 Jan 1934 as having a balance due of $1178. 21.
A payment of about $55 per year would have paid off the note.

It seems that Allen was never able to put enough aside to finance a new crop.
He kept an account with the Cross family at Hunters Mill – a store and mill.
Apparently when he wanted to expand his home in Water Swamp, he borrowed the money from the Crosses giving a mortgage to secure the loan.
This resulted in the sale of the family farm in Water Swamp in 1938 or shortly thereafter to pay off the debt. 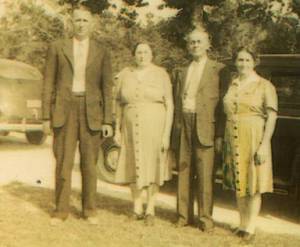 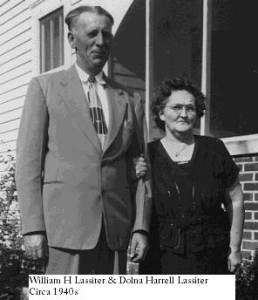 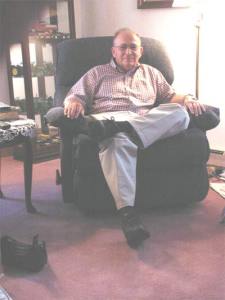 Fred and Evelyn Lassiter24 May 2004
snapped by Sally

obit
DEATH OF ALLEN A. LASSITER

Allen A. Lassiter, [life] long resident of Gates County, NC [born] Sep 8, 1835, died Mar [4, 1922] at his home near Sunbury, NC at the age of 86 years.
He enlisted in the Confederate Army at the outbreak of the Civil War and served the entire four years. He was at Appomattox Court House the day of Lee’s surrender to Grant.
Mr. Lassiter had been for a long number of years a faithful and loyal member of Damascus Christian Church.
On Jan 5, 1870 , he married Lucy A. Blanchard, who survives him. To this union ten children were born; five girls and five boys, all living except one, Henry E. Lassiter, who died Dec 24, 1908.
Those surviving him are: Mrs. John D. White, Deep Creek, Va.; John R. Lassiter, Driver, Va.; Wallace B. Lassiter, Driver, Va.; Mrs. Walter Hudgins, Matthews County, Va.; Mrs. Paul Long, Hertford, NC; George S. Lassiter, Corapeake, NC; Annie M., Lucy G. and William H. Lassiter, of Sunbury, NC
Twenty-three grandchildren and one half sister, Mrs. Job Hofler, and a half brother, John I. [Q] Lassiter of Gates County , NC.
Dr. I. W. Johnson of Suffolk conducted the funeral service, during which Mrs. Marie Brooks Crump, Oscar Hinton, Llewellyn Spivey and Dr. Johnson sang three favorite hymns of the deceased.
Burial was in the family burying ground near the home.
The pallbearers were: Carroll White, Bedford Brown, Willie Hofler, Howard Walker, Arthur Hofler, Walter Hofler, Oscar Hinton, Harry Lassiter [nephew].

[The family burying ground means the cemetery at Allen Lassiter’s home place.
As you face the home, it is off to your right towards the Carter home and at back of the field. The persons buried there are Allen and Lucy Lassiter, Jesse & Beatie Long and Henry Lassiter.] A new fence was installed in 1996 and a concrete slab cover was added.

This is my working hypothesis – the way I see it as of this moment!!
based on the Oral traditions compiled by Edward A Lassiter

John was apprenticed as an orphan of Josiah Lassiter.

John Lassiter was apprenticed to Henry Lassiter in 1820 to learn carpentry. John is believed to have been born circa 1804.

There is a bond dated 15 March 1855 , Abner Pearce and Sarah S. Melvin, the Bondsman or sec[urity]. Bond was signed by John X Lassiter of Josiah  indicating that John signed with his mark, and that he regarded himself as the son of Josiah Lassiter. Sarah S. Melvin was the daughter of Martha S. Brooks, who married Frederick Melvin (later married Thomas Bagley). Martha’s sister was Ann E. Lassiter, mother of Allen Lassiter, first wife of John Lassiter, son of Josiah. John Bagley and Martha Brooks/Melvin/Bagley were living with Abner and Sarah Pearce in 1860.

Nancy (or Ann E) Brooks died cir. 1840 to 1848. We know that John and Nancy had a son, Soloman, who died an infant – at some point after John’s second marriage in 1848. The marriage bond for John Lassiter and Sarah Briscoe is dated April 8, 1848 . The likelihood is that Ann or Nancy Brooks Lassiter died a year before John re-married. It is believed Soloman died of a common childhood illness of the time. Aunt Annie related it as: John Lassiter married Sarah or Sallie Briscoe, daughter of Old Man Easton Briscoe. They had five children.