“Joseph T Waff of Edenton bought in 1876 the dormitory property from Mr. Cross and moved his family to Reynoldson, Gates County NC to help his son and educate his younger children.”
“Joseph T Waff and his wife Elizabeth Benbury Waff lived in the “Reynoldson Hotel.” Thomas Edward Waff and his wife Caroline Rawls Waff lived in the Institute, where all five of their children were born.” 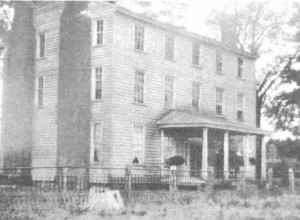 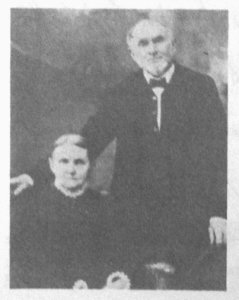 from the Waff Bible

Obituary of Elder Thomas Waff copied from an old Minute of the Chowan Baptist Ass.
Elder Thomas Waff, son of Thomas and Sarah Waff, was born in Edenton, N.C. on 12 Feb 1797. On the 14th of April 1818, he was married to Mary, eldest daughter of Capt. Stephen Carpenter of Edenton, and granddaughter of Capt. Stephen Miles of Eastern Virginia.
He was ordained to the full work of the ministry on the fourth Sunday in June 1842.
He was for several years Pastor of Salem Church, also preaching to destitute places in Chowan and Perquimans, occasionally in Edenton. His last text was peculiarly appropriate– “It is finished.”
He died on Sunday evening 30 November 1856. Age 59 years, nine months, 18 days

Will of Thomas Waff, Edenton, N.C. 8th April 1803
In the name of God, Amen, I, Thomas Waff, of Edenton, in the County
of Chowan, being very sick and weak, being desirous of disposing of my
property that it has pleased God to bestow on me does make and ordain this
my last will in the manner and form following, viz,
1st I give unto my son George Waff my negro man Dick,
my two lots of ground in the new plan of Edenton with the Hatters Shop and my shop that I have lately moved down on Mr. Nathanael Allen’s lot
also my stock of furs and hats now on hand and the trimmings.
2nd I also give to my son George Waff all the pelts and trimmings
which I have sent for to New York, on the condition that he pays to my
Executor or Executors hereafter to be named, the sum of one hundred dollars
that is if they arrive safely in Edenton, to him his heirs and assigns forever.
I give unto my son George Waff one feather bed and furniture
and all the furs I have at Mr. Devans in Windsor, Bertie County, to him his heirs and assigns.
3rd I give unto my beloved wife Sarah Waff, the use and occupation of my dwelling house and outhouses, the lot No. 100 in the old plan of Edenton until my son Thomas Waff shall arrive at the age of Twenty-one years. She is keeping, maintaining and schooling my children until they are of sufficient age to be bound out or otherwise provided.
4th I desire that my negroes be hired out annually until my son Thomas Waff shall arrive at the age of twenty-one years. This money used for
the maintenance and education of my children and wife and payment of my debts if required.
5th My will is that my Executors sell as they judge best, all the perishable part of my Estate. After the collection of such debts as are due to me, and the payment of my just debts.
My desire is that my executors equally divide the balance, and the Negroes that I own, between my wife Sarah Waff, my daughter Elizabeth, my sons Thomas, John, and Edward
Waff and the child of my now pregnant wife, (Negro Dick, which I have devised to my son George excepted) to them their heirs and assigns forever.
I give to my wife Sarah Waff three beds and furniture. The use of the Stables and Cribs (for the horses) on the lots given to my son George during the term of five years if she should require it.
Lastly, I appoint my friend Elisha Norfleet of Edenton and my wife Sarah Waff Executor and Executrix, to this my last will revoking all other wills heretofore made my me.
I set my hand and seal the 8th day of April in the year of our Lord 1803. In the presence of:
William Satterfield, James Satterfield Thomas Waff
It is further my desire that my wife keeps for the family use all provisions, liquors we now have on hand. And that my Executors lease or rent the piece of ground which I have on lease from the Commissioners of Edenton or sell the rails as they judge most advantageous for the benefit of my Estate.
Codicil to my will: having omitted to dispose of my houses and lot where I now live after my son Thomas becomes twenty-one years of age. It is my will and desire that my Executors sell the lot and houses after my son Thomas arrives at the age of twenty-one years. And the net sales are equally divided between my wife, My daughter Elizabeth, my sons Thomas, John and Edward Waff and their Heirs forever.

Sarah Waff, the wife of Thomas Waff, deceased, departed this life the 12th day of August in the year of our Lord 1820.

A William Waff married 17 Dec 1777 Celia Steward with Frederick Vail, bondsman
[not certain if this is this man or maybe his son]

A George Waff mentioned in NC Colonial Records Vol 17, pages 258 and 263 for service in Continental Line from Warren County, settled for pay at Warrenton 1786 for 17 pounds, 11 sh, 9 pence.

William Benbury was in Albemarle County NC in 1684 when he had a deed of gift recorded from his mother in law, Mrs. Dorothy Minsey.
William Banbury was a member of the first vestry of St Pauls Parish, Edenton in 1701.
He served until 1708. This vestry voluntarily assessed itself in 1705 for the benefit of the Church.

Tradition says that the family of Banbury, settled first on the James River, later moving to Nansemond Co VA finally migrating to Albemarle, in the province of Carolina. (this whole section)