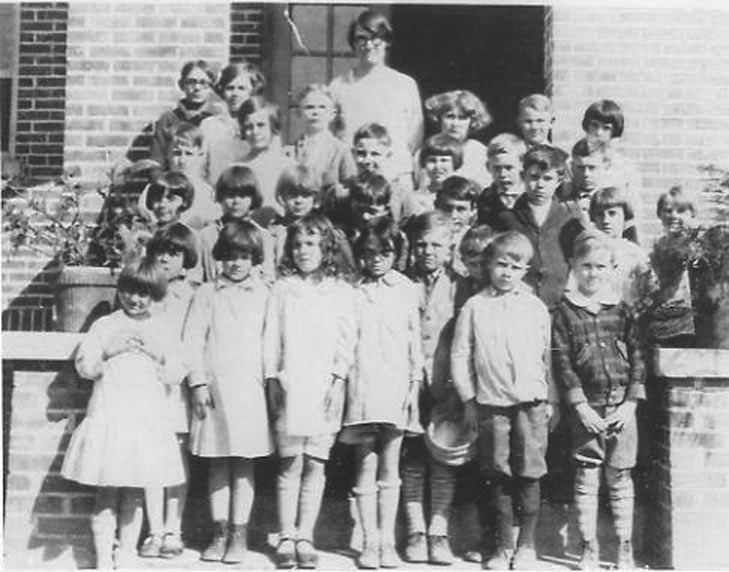 My father’s early schooling was in a one-room building at the edge of the farm that the Moores, Sessoms, Hollomans, Parkers and other neighbors attended until a two teacher school was established at Powellsville around the turn of the century. This school was located on the Bethlehem road just about the city limits – The C. G. White School was directly behind it facing onto the Colerain road. 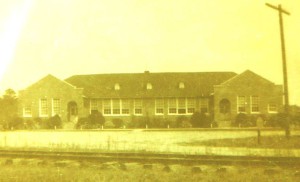 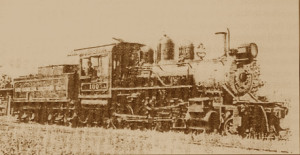 Class Pictures – made available by Lynn McCarthy
Many thanks to the individuals who shared the class pictures. Special thanks go to the many “over 60” family members and Bertie County friends who diligently labored to identify the children and teachers in the photos. We must remember that some students were the children of sharecroppers, thus were less well-known to classmates because they moved out of the community after attending school for a short period of time. Some children started school late and some, because of illness or other factors, missed a year of school thus weren’t with their original class. Some did not live in the immediate Powellsville area. These factors made it more difficult to identify many of the students. 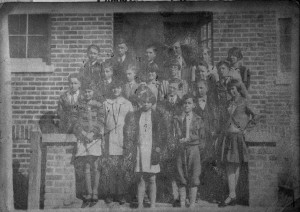 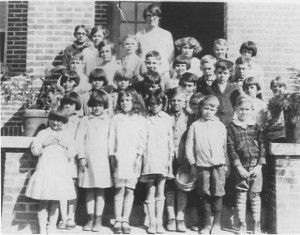 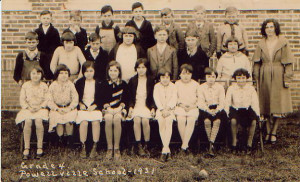 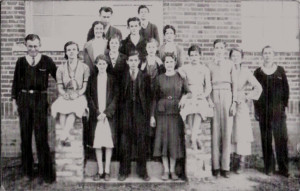 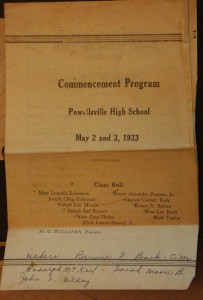 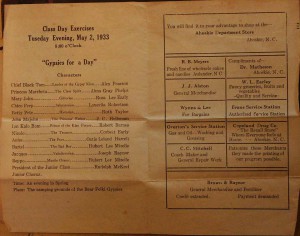 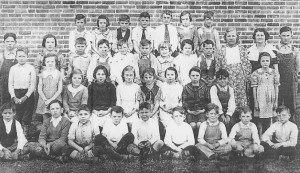 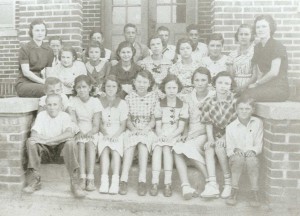 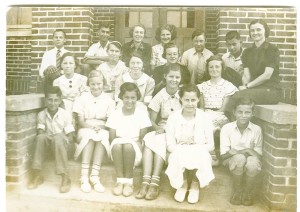 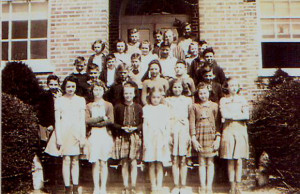 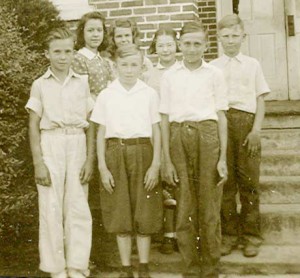 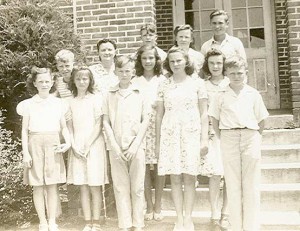 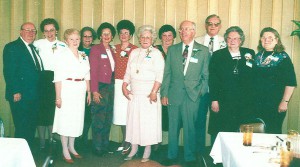 PUBLIC SCHOOLS IN THE POWELLSVILLE AREA

Varying opinions exist on the beginning of public schooling for Caucasians in the Powellsville area. One
source said children attended school in the Powellsville Grange Hall. Another source credited the
Methodist Church with the establishment of a one-room ungraded schoolhouse in the l880’s on the road from
Powellsville to Pitch Landing (now Bethlehem Church Road).

In 1877, there was a Stony Creek #545 Grange in Bertie County but it had a Pitch Landing address. Another
Grange was in Colerain. The deed for the Methodist Church was dated 15 September, 1880 and it is thought
that the church structure was erected 1881 – 1882. It is improbable that the church built a separate one-room
public schoolhouse (which was said to have become later the home of a local resident after he added more
rooms). It would seem more feasible that the church could have been used as a school during the week or a
one-room ungraded school was built on the edge of a neighboring farm.

Unfortunately, individuals who could provide details on early public education in the area, the involvement of
the Grange and the Methodist Church, are no longer with us. Individuals interviewed had no recall of a Grange
Hall in Powellsville. (The NC Grange went out of existence in the early 1900’s not to be re-organized
until the 1929 era. If there was Grange involvement in public education of Caucasians in Powellsville, it may
have been in the 1877 – 1900 era.)

From oral history interviews, it is known that a very large two-story frame schoolhouse was built in
Powellsville ca. 1910 – 1912. This graded school served students, grades one through seven. The school was
located on what is locally known as the Powellsville to Windsor Road, across the old Wellington and
Powellsville RR grade, on the SW side of the road. It was across the road from the residence of Charles
“Capp” Overton.

For the school year of four months (December – March), children from as far away as 3 ? miles, traveled by
horse and buggy Monday through Friday to attend this school. Some students in the area of Cremo Road and the now US 13 North caught the Wellington and Powellsville (W & P), (locally called the Walk and Push), at Cremo and rode to Powellsville on Mondays, boarded with Powellsville families (such as the Overtons), then
returned home on the W & P Friday evenings.

(Prior to the existence of the graded school in Powellsville, most children attended ungraded one-room
schoolhouses. One, located across the road from the S. S. Cowand farm in the Cremo Road, now US 13 North area, served 15-20 neighborhood children. Augustus “Gus” Bass taught all seven grades and boarded with the
Cowands during the week, then returned to Powellsville for the weekend. Possibly this school was built ca.
1880 – 1884 era as ten of the Cowand’s children attended this school. The graded school in Powellsville was built in time for the two youngest children to complete their elementary education in Powellsville. Because there was no public high school in the county in the 1891 era, the Cowand’s oldest child attended school in Winton and boarded with a family during the week. This was not atypical for the time frame.)

Students completing seven grades at the “old” Powellsville School received a Certificate of Promotion
which read as follows:

One certificate, dated 30 March 1917, was signed by Herbert W. Early, County Superintendent and Leslie
Winston Pearson A M, Teacher. (Some students in the 1917 era then went to Aulander High School and some
went to Ahoskie.)

Consensus of the interviewees was not reached regarding the year that the “new” brick Powellsville School was
built. One source thought it was 1921 – 1922. Another said it was 1925. Several said it was 1927 – 1928.
Still another said construction started in 1926 and the building was completed in 1927. This latter recollection appears more accurate as the interviewee said she was in the second grade in 1928 and she started school in the brick building, not the old frame structure. (Noteworthy is the fact that the county bus system began in 1926, closely aligned with the opening of the “new” Powellsville School. The use of the one-room schoolhouses began to diminish in the 1920’s and coincided with consolidation of schools and road improvement.)

This “new” Powellsville School was located on the Ahoskie Road, NW of the center of town and had eleven
grades. Once this school was opened, the “old” school was used as a teacherage. Most interviewees said the
teacherage burned on a December evening in 1936. Teachers then boarded in private homes. Later, ca. 1941, another teacherage was constructed, a two-story frame structure, closer to the school. It was suggested that Works Projects Administration (WPA) funds were used to build the teacherage. This structure stands today as a private residence. Mrs. Edith C. Freeman, teacher for years at the Powellsville School, made this her home until her death in 2001.

In 1942, the County Board of Education voted to add a 12th grade to all public schools as of the 1943 school
year. Students, grades 8 – 12, who would have attended the Powellsville School, were subsequently bused to
school in Ahoskie. From 1943 until the school was closed in 1955, the Powellsville School served the
elementary education needs of Caucasian students in the area.

On Highway 42 East, just outside the town limits, is the C. G. White Middle School. On the same site, circa
1904, a private school was built. Later, the school became the Bertie County Training School. Named the
Charles G. White High School in 1938, it was once the largest school for African-American students in the
county. 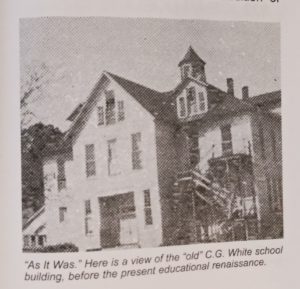 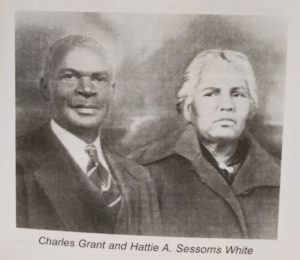 In 1910, both Charles G. White and his second wife, Annie, taught at this graded school. (Later, Mr. White
became principal.) In the 1930 school year, teachers at the training school were Bessie Broadnax, Sadie
Fitzgerald, Arninta Lann, Jessie Stewart, Bessie Weeks, Marie Weeks and Annie White. Because there was never a teacherage, teachers boarded in private homes, including the White household, which was next to the
school.