translated by
Fred and Leon Deutsch

The first historical mentioning of Jews in Strazov dates to 1405. This mentioning appears in the endowment documents of the sponsor and protector of the Strazov Church, the Knight Buska of Opalka. It is here that he mentioned, among other items, the Jews as being permanent residents of Strazov.
Jews of those days were forbidden to engage in agriculture or trades. They were only permitted to engage in commerce. For this reason they settled mainly along various commercial routes and near the castle of Strazov which in those days was a place suited for this purpose. Strazov was situated along the active commercial route leading from the Bavarian Zwieslau to Klatovy which with its citadel offered sufficient security.
The Jews who settled in Strazov lived outside the Strazov citadel on the northern manorial lands, thus securing for the landlords a continuous source of income.
After the Husites wars Strazov opened silver mines that led to an increased number of Jewish settlers, and by 1441 one could find in Strazov already 16 Jewish households. They engaged in commerce with salt, cattle, wine, textile, grain, etc. and secretly in trade of silver.
Due to the influx of Jews and miners the little town grew in size and in 1524 King Ludvik I elevated Strazov to the rank of a Town and bestowed upon it several privileges all of which contributed to its growth. Strazov also received permission to hold a by-annual market, one weekly market for cattle and a Thursday a market for textile and salt.
The number of Jewish families in Strazov kept growing and by the 16th century numbering already 20 households. This number remained constant until 1848 when Strazov had already 43 Jewish families occupying 20 houses thus making it the largest religious settlement of the Klatovy region.
In the medieval times Jews were only tolerated as an element without rights and forced to reside separately from rest of the population. In Strazov they lived all on one street running from the West to East. This street-unofficially, unfortunately-carries to this day its historical name “Jewish.” The houses occupied by Jews were on the main of one story and built solidly of rock. The street level rooms were all vaulted. The houses occupied by Jews were all numbered with Roman Numerical as to differentiated them from the Christian houses a custom that lasted in Strazov until 1880. These were today’s houses with the following numbers: 180-I, 181-IIa, 182-XIIb, 196-XIII, 197-XIV, 198-XV, 199-XVI, but the Synagogue had no number.
The Strazov Jews through their talent attracted most of the commerce into their hands. All the town’s stores were concentrated exclusively in the “Jewish” Street. This situation lasted until the 60’s of the previous century.
In the 18th and 19th Century the Jewish merchants engaged in commerce with iron, hide, alcohol, grain, cotton, and textiles. Astute individuals derived also income from lending money at high interest rates. Especially lucrative was commerce with feathers and the Strazov merchants traded with Austria, France, Belgium, Holland and even through Hamburg with America. Lively trade was also with the Orient and feathers were sent as far as Smyrna, Damascus and Jerusalem. Many Strazov Jews derived their livelihood from peddling. They bought and sold textile in Bavaria, Austria, and Tyroles. Foreign Jewish peddlers who came trading to Strazov had to spend the nights in the so called “Jewish Pub.” Today it is house number 147 called “In Mouse’s Hole.” This house was erected for the convenience of the Catholic Priest whose job it was also to oversee the Jewish peddlers while staying in this Pub.
After many centuries of constant oppression the Jews began to experience a relief. The Enlightened Kaiser Josef II by a toleration decree of 1781 permitted, among other things also the free movement for Jews. They were permitted to reside and engage in commerce anyplace outside the Jewish Quarters. The Strazov Jews reacted in the spirit of time and already by 1805 we found that 10 Jewish families resided outside the Jewish Ghetto and by 1876 this number increased to 14 families. They resided in houses Nos. 30, 31, 39, 42, 45, 47, 105, 106, 109, 110, 111, 113, 122, 145, 146, 154, 182, and 196.

It is only natural that such a large religious community comprised of Jews of Strazov, nearby Besin and Cachrov had its own Synagogue. A historical news item from 1680 mentioned that Jews of Strazov had their own wooden Synagogue. Some time later, in 1808 this wooden Synagogue was replaced by one made of bricks. This Baroque style Synagogue was for its times also richly adorned.
The Strazov Jewish Community had also its own school with its own building. It was a one story high building adjacent to the Synagogue with the house number 189-VIII. On the street level was the Rabbi’s apartment and above it were classrooms. However because Jewish students attended simultaneously Strazov’s public schools, the lectures in the Jewish school took place on Thursday and on any other day after 5 p. m. The subjects taught were German and Religion. The teaching language was by law German and the Rabbi was the teacher.
Under “Perlavka” one can see until today a modest building that used to serve as a ritual bath. According to laws of those days only fresh water was used. Today this building belongs to the adjacent property number 25.
Additional commemorative about the past Strazov Jewish Community is a Jewish cemetery, its origin is at least 500 years old. This cemetery is at a distance of about 25 minutes from Strazov and is situated on a slope of the Smrkova mountain. The cemetery is 30 m x 54 m and of a rectangular shape. One can find there people buried not only from Strazov, but also from nearby Besin and Cachrov. The last headstone is from 1925. One will find here graves, especially on the upper left side, completely collapsed and hardly noticeable. In the center of the cemetery and its upper part as well as along its western fence one can still see many graves. Those gravestones are simple, made of stone and of identical shape and design. The lettering is only in Hebrew language and today already illegible. Those gravestones date back to the era when being Jewish meant humiliation. Gravestones dating back to the 19th century have inscriptions in Hebrew and German. Gravestones dating to the 20th century are of a more modern design with the majority of them made of polished granite. Gravestones with Czech inscription exist only three. Lately one can readily detect a strong overall deterioration of the cemetery. [a topo map. The cemetary is marked by a tiny rectagular box with a circle inside, to the right of the village. I think “Jewish Street” is the curved street upper right from the “+”, which marks the church. e-mail from Jim] 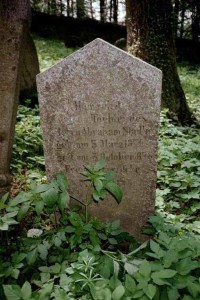 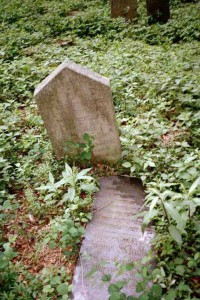 photos in the cemetery – Jim Ehrlich 2002

Departure of Jews from Strazov

The growth and development of the railroad system, dating back to the second half of the 19th century, created an immensely large changes in the manufacturing and trading opportunities. This development signaled also a radical change in the erection of new roads and transfer of goods. The majority of trading routes started to center around new and planned railroad lines. These changes impacted mostly villages and towns adjacent to the railroad lines and brought prosperity and development. Old lines of communication began to die out and so did places outside these new developments.
All the efforts of Strazov’s population to be included in the new railroad network development fell on deaf ears. The south Bohemian railroad connection Domazlice-Brno, erected in 1886-87 included Klatov, but not Strazov. Also the line Plzen-Zelezna Ruda omitted Strazov, and so Strazov was omitted from this new and vital communication link.
These events dealt to the Strazov mostly trading Jews a fatal blow. They felt instinctively that the new opportunities are destined to take place in towns near the railroad lines and consequently began to depart Strazov. The newly departed traders settled mostly in Klatovy, some went to Prestice, Plzen, Prague, Vienna, Budapest and even America. The exodus started around 1860 and by 1894 there were only 11 Jewish families or 45 people. In the subsequent 11 years another 10 families left, leaving Strazov deprived of their commercial talent and know-how. Contrary to Strazov’s loss, most of these exultants benefited greatly from their changes. . . . . .
So in the end only one Jewish family remained in Strazov – Benedikt Stadler who owned a tannery. After him it was modernized and taken over by Karel Feigl. Consequently the Jewish Community weakened from year to year until by the end of 1905 it disappeared completely.
The “Jewish” Street that once was the aorta of commercial life in Strazov is today only a weak shadow of its past busy activity. Most Christian owned shops only scrape along. The abandoned Synagogue and the adjacent school, although now in private hands remain as witnesses to better times. Their owner became Zikmund Lederer a trader from nearby Janovice nad Uhlavou. The school is rented out as apartments and the Synagogue serves as a warehouse. The only and most important item that remained of the Jewish presence in Strazov is one embedded in the memories of its residents.
. . . .Even during the regime of the Austrian Empire, Strazov Jews always considered themselves to be Czechs. One can attribute this to a tradition from a distant past. Strazov’s Jews also liked to frequent in Czech social circles. . . .the Jewish presence in Strazov will be always remembered with a deep sense of loss.