This is my working hypothesis – the way I see it as of this moment!!
the following information supplied by Janet Briton and Patsy J Evans is posted here at their request.

Lemuel Britton and Nancy Ward were married in 1832.
Lemuel Britton was born 10 September, 1799 in Pitt Co, NC the son of John Brittain Jr and Mary Sessoms.
He died October 30, 1871 in Belvoir Twsp. Pitt Co NC.
Nancy Ward was born in 1811 in Pitt Co the daughter of James Ward and Nancy Lanier.
She died 13 Nov 1891.
They both were buried in the James-Speight Cemetery, Pitt Co, North Carolina
Nancy Ward had a brother, Luke Ward 1807 – 1865 who married Mahalia Legget born in Halifax Co 1819.

“Nancy Ward Britton was the sister of Lanier Ward, my GGG-grandfather. His wife was Elizabeth Rodgers. My GG-grandmother was Ann Eliza Ward Stokes, married to David W Stokes. My G-grandmother was Hettie Stokes Stokes (possibly Stocks). I have not been able to find her husband’s name. If anyone knows, I would appreciate an E-mail.” Dolly Keith 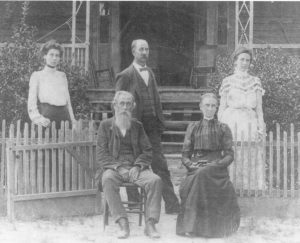 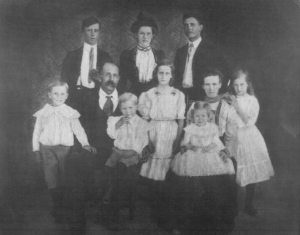 Benjamine William James, Rillie Teel James and their children: George C. James, Alice L. James, Lemual James, Lila James, Wilkie James, Annie James, Dewey James, Bob James. This picture must have been taken ca 1903 as my living great aunt Rillie tells me her mother was pregnant with her when this photo was taken. 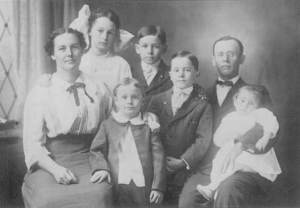 George James and Sally Ward James and 5 of their 10 children
Beatrice James, Nealy James, Carlton James, Ben James and Ruby James.
Ruby is still living and is a big help to me on gathering information
as is my great aunt Rillie. from Patsy James Evans