My working hypothesis – the way I see it as of this moment!!
based on research by J Roy Parker Jr and his cousins

“. .our Elisha Parker, whose residence in Hertford County always seems to have been on what is now the road from Ahoskie to Harrellsville, early known as Pitch Landing or Bethlehem Road. Elisha married Penelope Dilday born in 1795. She was still alive when he wrote his will in 1868.” ~ Roy Parker

“In 1861 Elisha Parker deeds his farm to his son Joseph Benjamin Parker. Hertford Co Bk A-228 Dec 1868. Deed made 10 Sept 1861. probate 7 Dec 1868.
Elisha Parker to Joseph Benjamin[son] 121 acres for $120 including two grants of 100 acres obtained by Elisha in Nov 1834, 71 acres in Nov 1835. Elisha and present wife Penny keeping for life. . .on White Oak Swamp, adjoining Lawrence Askew, Ely Willoughby and others. “These were ‘grants’ because the Hertford County courthouse burned in 1831, and landowners who already had property were given special ‘grants’ of the property they already owned. This property lies in the eastern side of the present-day Harrellsville Road and Newsome Grove Road. White Oak Swamp runs east-west just north of Harrellsville Road. It rises on the east side of the town of Ahoskie and flows into Ahoskie Swamp.” ~ Roy Parker

“My husband’s family are also Parkers from Hertford/Gates/Bertie Counties.
There were just so many Parker families in that area and many with the same
names. We have only gotten back to Elisha Parker b. about 1787 in Gates
County, NC. (according to census records) and died about 1868-1869 who
married Penelope Dilday. They are both buried in the Parker Cemetery on
Harrellsville Road outside of Ahoskie on land which is still in the Joseph
Benjamin Parker family. My husband’s grandfather, John Brice Parker (brother
of Joseph Benjamin), came to Texas in about 1883-1884 with his first family
(wife & 9 children) and settled in the Dallas area where his first wife,
Martha Ann Barnes died. Then he married his second wife and proceeded to have
9 more children (my husband’s father is from the second batch).
I might add that he also outlived his younger second wife and died at the age
of 86.” ~ RaNell Parker

“The Elisha Parker from the War of 1812 was yet another Elisha, related to yet another Peter Parker. You know they stayed up nights, trying to drive us nuts! There were also two men named James who had sons named Amos. Why not?” ~ Ray Fouts

1832 In the estate of Elisha Lawrence, there is a $13.75 bill owed to Elisha Parker.
Elisha Parker bought a bushel of peas in the Larence estate.
In the estate of George Dunn, Dunn owes Elisha $2825 [These Elisha ref are to the Elisha who lived in the Northern Distr over in Murfreesboro]

In 1859 Elisha is witness to will of John Rasberry. . who leaves to two sisters, including Mourning Rasberry, land near Stony Creek. . Mourning’s will in 1868 includes land on White Oak Swamp.

May Ct 1792 Gates Co – Bill of Sale for a Negro Boy Ben Benjamin Parker to Caleb Savage proved by the oath of Samuel Eure etc.

May 21 1810 – Rebecca Parker came into Court and moved for the Administration on the estate of Benjamin Parker decd. her late Husband, which was granted Ordered that she give Bond and Security in the sum of five Hundred Pounds, at the same time —– offered themselves Securities, provd.

Ordered that Rebecca Parker Admx. of Benjamin Parker decd. sell the perishable estate of the deceased as the law directs etc.

Inventory of the Goods & Chattles, rights and credits which were of the estate of Benjamin Parker was exhibited into Court by Rebecca Parker admx. on oath.

Ordered that Mills Eure Esqr., John Odom, Abraham Cross, & David Harrell allot to Rebecca Parker widow of Benjamin Parker decd. such part of the Crop, stock, & provisions of the deceased estate as they may think necessary and adequate for the support of the said widow and her family for one Year, Agreeable to the Act of Assembly in such cases etc.

Aug Ct 1810 – Inventory of the Goods & Chattles, rights and credits which were of the estate of Benjamin Parker was exhibited into Court by Rebecca Parker admx. on oath.

from the loose papers in the Estate folders in the State Archives on film. only item in folder labled Elisha Parker
Bertie Co Ct Feb Term 1816 – The State of North Carolina To the Sheriff of Bertie County, Greeting: Whereas in our Court of Pleas & quarter sessions held for Bertie County at May Term last William Rea empleaded Elisha Parker son of Ben Parker formerly of Gates of the plea that he render unto him Sixty Dollars & Twenty five Cents = Twenty pounds two shillings & six pence which he owes & from him unjustly detains to his Damage Twenty pounds & the sheriff . . .divested that in his County he could not find the Body of the Said Elisha Parker and he failing to appear and it being ordered at the present Term of our said Court that a writ of attachment issue against the said Elisha Parkers Estate for the Debt & Damages aforesaid as to compel him to appear etc etc
day of Nov AD 1815 Sol Cherry Jun C C
Back of document Rea viz Indivial attach’ Parker Feb Term 1816 – – Lived on the Lands, one horse, Two feather beds the right of Elisha Parker and a signature I cannot decipher — smk. 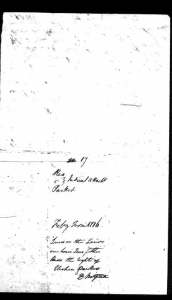 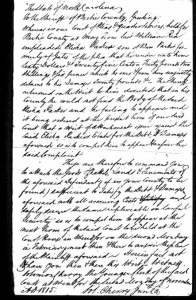 Our Elisha Parker was born Abt. 1787 in Gates County, NC per census. Using that data and with the belief that our Elisha was still in Gates until after the 1810 census, the following is what I have surmised at this time.

The Parker households listed in the 1790 Census for Gates County and which show a male under the age of 16 are: Elisha should be about 3 years old.

NOTE: None of these are found in Gates County in 1800.

In the 1800 Census for Gates County, the following are the Parkers found with the same name in the above list who have a male at least 13 years of age.

NOTE: There is also a Peter and William in the 1790 Census for Hertford.

In 1790 Census for Hertford, the Parkers with at least a 3 years old male are:

1810 Census of Gates County, NC is an Elisha Parker as head of household as follows:

1 m. under 10 (Possibly Thomas Parker 8 who is found around Elisha & family)

Since there is not an older male, I assume the father had died and that the 26-44 females is the mother of Elisha and some/all of the others. Perhaps Elisha had married and some of the younger children were his, but some are too old to be children of Elisha. Another theory is that he is not married and the children are his siblings.

Penelope Dilday who married our Elisha would be about 17 years old in 1810.

There is always the possibility that Elisha was married to another female prior to Penelope. No family record points in that direction.

12 March 1742/43 Mr. John Parker & Mr. Richard Parker Senr. appointed Processioners from the Knotty Pine up the Road that Leads to the Virginia Line to the Said Line & Perquimons Line & all Contained between that & the Loosing Swamp etc.

there is also the possibility that Benjamin is a son of John’s brother Robert.