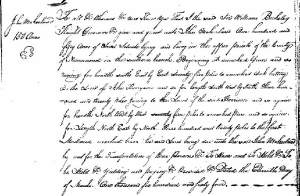 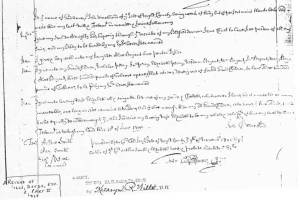 I have always thought this line was the Virginia ancestry for John Perry (b c. 1690 d 1760 in Bertie County, N C) who moved there from Upper Parish, Nancemond Co, Va by the 1720s. He married first Elizabeth, then Sarah . . .
I am descended from John and Sarah’s third son Benjamin Perry born about 1730
in Bertie Co, NC. Their eldest son was name Nicholas who married Mourning Spier

Given the names in the MacLand will (Bryant, West, Smith) many of whom are later assoicated with the Perrys in NC, and the name Nicholas Perry, I feel this Mackland line is a better bet than the more often cited line from Grace and Philip Perry. I have written to you and copied to several other researchers who have the done work on the Needham Bryant and John Perry lines to see if you have any direct evidence linking this John Mackland’s named Perry grandchildren to John Perry d 1760 in Bertie Co, NC. . .Rebecca Starr

e-mail from Barry Hayes Feb 05 – Needham’s maternal grandmother, mother of Elizabeth MacLand (orMaccloode, Maceloud, Mackloud, and Macloode as their names appear in Surry and in several Nansemond patents), may have been a Needham.
The idea of a Bryan-Needham marriage in England was just more of that family legend about which sparks continue to fly on the internet; there were probably enough untraced Needhams in 17th century Virginia, as noted below, without the need to go back and look for them in England.]
The various spellings in the records of Surry County (Maccloode, Maceloud, Mackloud, and Macloode) are those deciphered by William Lindsay Hopkins when he was abstracting the deed books. Without having perused the originals, I suppose the name was something like the common “McCloud.” You have posted his patent of 1664 on the Western Branch of the Nansemond River.
He was probably a nephew of the “Daniel Mattland (indexed Macland),” according to Mrs. Chapman’s abstract of Daniel’s will of 1680, p. 20, that mentioned his son Daniel and named “cousin [sic: nephew?] John” an executor.
The son of this Daniel may have been the “Daniel Maclood” who was a headright of Epaphroditus Benton of Nansemond on 20 April 1682. See Nugent, II, 239.
On the same day (20 April 1682), “John Macloode” patented 270 acres in the Lower Parish of Surry adjacent Nicholas Sessoms (Nugent, II, 231),
and on 21 November 1693, “John Macloode” and Elizabeth, who surrendered her dower, deeded this property to Nicholas Sessoms, except for 70 acres deeded to Robert Caufield. See Surry Deeds, Wills, Etc., # 4, p. 334.
“Daniel Maceloud” witnessed a deed of John Young in Surry on 5 November 1709 (ibid., # 5, p. 437).
The Perry family of London merchants had strong ties in Surry, and John “MacLand [sic]” named his Perry grandchildren in his will of 1705, as well as the children of his daughter “Alice Bryant.” But who was the Bryan “MacLand” whose estate was appraised by Hodges Council in 1708 (Chapman, p. 47) ?
As for the Needhams, in 1621 a John Needham was a headright of George Sandys of the Company. Thomas Needham was a headright of Robert Bennett of Upper Norfolk (Nansemond) on 18 February 1638; he was quite possibly the same Thomas Needham of Elizabeth City, mentioned along with “his heirs [unnamed]” in the patent of James Wallace on 19 December 1711 to part of a grant to Samuel Stevens of 2,000 acres in 1637 (Nugent, I, 101; III, 122).
Daniel Needham was a headright of Edward Hall of Lower Norfolk on 11 May 1652.
John and Richard Needham were headrights of Francis Burnell of New Kent 14-28 October 1657 and of John Sellaway and William Mayo of Kingsale Swamp, Isle of Wight, respectively, on 16 April 1683 (Nugent, I, 4, 349; II, 254).
William Mayo was the uncle-in-law of Hodges Council’s daughter, Lucy Council Wooten.