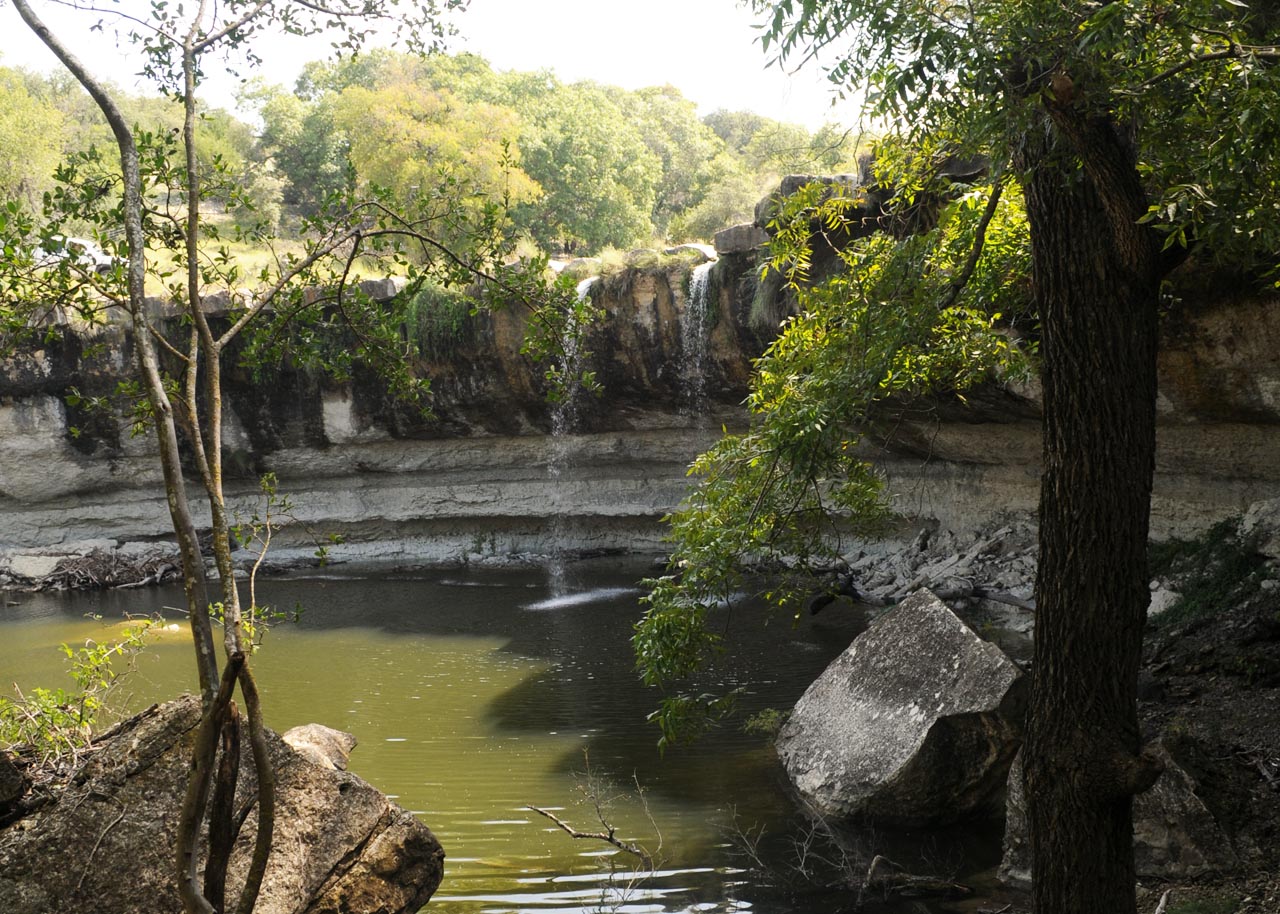 This is my working hypothesis – the way I see it as of this moment!!
from material provided by Dean and Fran Fife

From the Rayner Bible we learn that Joshua was born 13 September 1815 the sixth of seven children. His mother Martha died when he was five and his father when he was nine.

Will of William Rayner dated 16 July 1827– proved August Term 1827
In the name of God amen I William Rayner of Bertie County being of sound and perfect mind and memory blessed be God do make and Publish this my last Will & Testament in manner following that is to say ———
First I give to my sister Sally Rayner One negro woman named Edy to her and her heirs forever-
Secondly I lend unto my said Sister Sally the plantation and lands where on I now live together with two other parcels of land adjoining One of which I purchased of John Britton the other of Abner Harrell together with all the profits, ——–, and advantages thereunto belonging or in any way appurtingly during her natural life and no longer and after her death I give the above mentioned tracts of land unto William Rayner son of Joshua Rayner decd I say unto him and his heirs forever ——–
Thirdly I lend unto my Sister Sally two negro men Hebre and Jery during her natural life and after her death I give the Said negro Jery to Thomas Rayner Son of Amos Rayner to him and his heirs forever and also I give the Said negro Hebre unto Joshua Daughtry Son of Daniel Daughtry to him and his heirs forever.
Fourthly I lend unto my Sister Winny Daughtry five negroes namely Hannah, Bay and Barbary, Harry and Harriet during her natural life and after her death it is my will that the said five negroes to be equally divided between John, Mehita, Amos, William R., Daniel and Joshua Daughtry the children of Daniel Daughtry decd. to them and their heirs forever.———
Fifthly I Give one Tract of Land unto William R Daughtry it being a tract of Land in Hertford County whereon Johnston Hill now lives I say to him and his heirs forever.
Sixthly I give to William McFarlin One negro Girl named Beea I say to him and his heirs forever ——–
Seventhly I give to my beloved brother Amos Rayner my family Bible to him and his heirs forever.———–
Eightly I give William S Rayner One Tract of Land adj to the land of Matthew Morris and others also One negro man named York to him and his heirs forever——–
Ninthly I give to Elijah Rayner, James Duers & Celia Capehart One hundred dollars to be equally divided between them to compensate for a piece of Land that Joel Rayner gave me in his last will that they were displeased with me for Amt quit.
Tenthly I give unto James Ross Oxley Son of Aquilla Oxley One negro girl named Jane to him and his heirs forever.———-
Eleventhly I give unto Joshua Rayner Son of Joshua Rayner decd a Tract of Land Called the Trumbell Tract to him and his heirs forever.———–
Twelth I lend unto Elizabeth Copeland One negro boy named Blount during her natural life for the sole use of her benefit, but not to be Construed or to come under the Control of her husband or subject to the payments of any of his debts and after the Said Elizabeth Death I give the said negro unto Loadicy Rayner daughter of Joshua Rayner decd to her and her heirs forever——-
Lastly all the Residue of my Estate both Personal and real after Paying all my Just Debts and the Legetees above named It is my will and desire it should be equally divided that is to Say One fourth Part to the heirs of Daniel Daughtry decd; One fourth Part to Amos Rayner’s Children; One fourth Part to the heirs of Walter McFarlin decd; and the other fourth part to be equally divided between the following children of Joshua Rayner decd namely Mary Oxley, Sally Rayner, William Rayner, Joshua Rayner, Laodice Rayner–
In witness whereof I the said William Rayner have to this my last will and Testament set my hand & Seal this 16th day of July in the year of our Lord 1827–
Signed sealed and declarred in presents of Test James Ward & Test Isaac P Freeman ——— W Rayner

The Bill of Complaint of Samuel H Sessoms 2 August 1827 . . .in 1826 William Rayner was appointed Guardian to Joshua Rayner’s Orphans . . .and that the said Mary Rayner some time in the year —- intermarried with Aquilla Oxley.

this is from material prepared by Dean and Fran Fife

William Gaston Rayner’s father died when he was about ten years old. He then joined the William Rayner household where Grandma Penelope Drew lived.

It also appears that ” William Gaston Rayner was a soldier under General Robert E Lee when he was stationed at Fort Mason, Mason Co TX. [The Roster of Confederate Soldiers 1861 – 1865, which is maintained in the archives in Austin, Texas, lists him as : Rayner, Gaston TX 8th Cav Co A.] Enlist Sept 1861. Remarks: left sick in Tennessee; Wheeler’s rear raid Sept 1864.

It is presumed that he was discharged there and settled in the adjoining county, Gillespie.” He became a rancher in that area and was shot and killed on his own ranch on July 25th, 1884 by an Ed Jaynes [a relative through marriage]. “He is buried at a spot near the line of Kimble and Gillespie Counties, TX in the Falls River Canyon.”

Comment from Dwayne Knox 21 Dec 2020: “I’m of the Taylor family William married into. I can add a couple of details to this sad story. Alice had been orphaned at a young age, then captured by Kiowa when they raided her grandparent’s ranch. William had been in Gillespie County before the War. He was discharged in Tennessee and returned to Texas. Alice died young and left her children, orphans. Her obituary is very sad…” 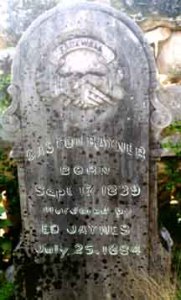 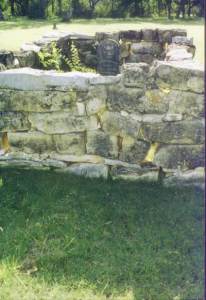 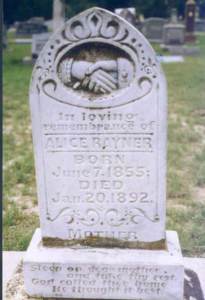 photos June 1999 by Dean and Fran Fife
Gaston’s grave is located on Falls Ranch, Kimble County, TX
[he was killed by a relative through marriage] It is surrounded by a low rock enclosure. [center] 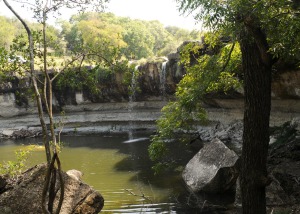 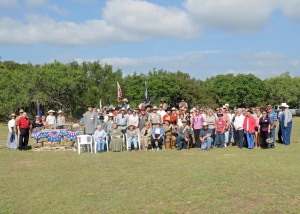