1702 John Wynns was born [from deputation] son of George and Rose
1732 John Winn is sold land by Robert Forster
Forster asks Ct to make John his deputy clerk
1733 John is Deputy Clerk
1740 on the jury list of Bertie in 1740
1744 deputy surveyors under the Surveyor-General of the Crown [John and Benj.]
1746 John Wynns was in the Assembly from Bertie in 1746
1749 John Wynns is one of the Vestrymen of Society Parish
when John Howell deeds land for St. John’s Chapel
1750/1 John Wynns writes his will
1753 Will of John Wynns proved at May Court
1753 June — marriage contract Burrill Bell with widow Sarah Wynns
1759 Burrill Bell is made guardian to the orphans of John Wynns

Winborne’s History of Hertford County – Benj. Wynns and John Wynns were men of prominence in Bertie Precenct as far back as 1735. They were deputy surveyors under the Surveyor-General of the Crown in 1744, and their depositions were taken on behalf of the Crown to prove charges of corruption against Gov. Gabriel Johnson, for violating the land-grant laws. Both of them were freeholders and on the jury list of Bertie in 1740. John Wynns was Deputy Clerk of the Court of Bertie County in 1741, age 39. Col. Rec, vol 4, p 1117. John Wynns was in the Assembly from Bertie in 1746.

May Ct 1732 Deed of Sale from Robt. Forster to John Wynns ……Robt. Forster the Clk of this Court Praying to have John Winn Qualifyed as his Deputy…John Winn took the several Oaths by Law……

Will: John Wynns, at Winnsor 10 Feb 1750 proved May Ct 1753
. . .”being (I thank God) in my proper senses…”
Son James Boon (sic) – my manor plantation where I now live, also that land I had of Robert Forster, provided he disclaims a title to William Evans for 111 acres where he now dwells, valued at six pounds with interest since 1746, also give him Negroes Charles and Moll, and my best desk.
Daughter Mary Anney – lands I bought of Peeke & Hollum, also Negroes Tom and Priscilla.
Son Watkin William Wynns – my ferry plantation, including the lands I bought of John & Treddle (?), since called the Blind Islands, reserving one-third use of same for my wife Sarah during her widowhood, also leave him Negroes Ceasar and Cader.
Daughter Sarah Amelia – my plantation called Morrisses and my plantation called Cuba, also the land I bought of Mary Howcott, also Negroes Mingoe and Anna.
Son John Augustus – my land called Bridge Neck, also 400 acres of lightwood land, also slaves Rachell and Arthur.
Youngest daughter Wynney Caroline – land called Sharp’s Neck, part of William Bush’s survey, reserving the use of same for my wife during her lifetime.
My late apprentice Anne Reason may have a cow and a calf, etc and 100 acres. “if she marey by my wife’s cousins.”
Remaining estate to my wife Sarah and legacies to my heirs are to paid when my sons are twenty-one and to my daughters when they are sixteen.
Ex. wife, brothers Benjamin and William, sons James Boon, Watkin William Wynns.
Wit: Joseph Wynns, Stepn. Hooker, William Hooker, Junr., Ephraim Hunter, Benjamin Baker.

H-429 Burrell Bell to Benjamin Wynns & Nicholas Perry
July 18, 1753. Marriage Contract Sarah Wynns-Burrell Bell. June 8, 1753.
Burrell Bell & Sarah Wynns, late relect of John Wynns agreed to be married. Sarah Wynns was possessed of “considerable property and personal estate consisting of negroes money and other chattels” wished to make provision for her five children. Five negroes and 25¬£ settled on Benjamin Wynns and Nicholas Perry provided Sarah Wynns have use of them during her natural life. Should Burrell Bell survive Sarah; “then in trust for Mary Ann Wynns, John Augustus Wynns, Winnifred Caroline Wynns, William Watkins Wynns, Sarah Amelia Wynns children of Sarah Wynns or such of them as shall be living at that time to be equally divided among them….” Wit: William Wynns. April Court 1757. Benj. Wynns C/C

#476 April Ct 1759 – Watkin William Wynns Orphan of John Wynns Deced. about the age of Sixteen years of age and Sarah Amelia Wynns Orphan of the said Deced. about the age of fourteen years came into court and Pray’d Leave to Choose Burrill Bell for their Guardian, which was Condidered off and Granted. Order that he be and John Baker, Esquire, James Boon Wynns and Ralph Outlaw appeared in Ct and offered themselves as Security. John Baker atty at Law then Prayed that Burrill Bell be appointed Guardian to John Augustus Wynns and Winnefred Caroline Wynns orphans of John Wynns Deced. This said petition was rejected.

#491 June Ct 1759 – Burrill Bell who was appointed Guardian to Watkin William Wynns, John Augustus Wynns, Sarah Amelia Wynns & Winnefred Caroline Wynns orphans of John Wynns deced. by this court at its last sitting Acquainted the Court that John Baker Esquire one of his then Securities desired to decline his suretyship and thereupon refused to execute the bonds that were prepared for that purpose. And at the same time the said Burrill Bell moved for leave to present to the Court one other Security in the Room of the said John Baker which was granted and also at the same time Capt. James Jones appeared in Court and offered himself as Security in the room of the said John Baker who was approved by the court. Thereupon it was ordered that the said John Baker should be erased out of the said Bonds and James Jones should be inserted. 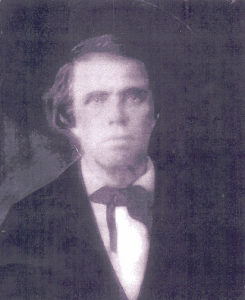 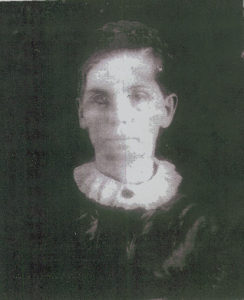 there was two thomas wesly wynn, one was a son of thomas wynn. one was son of burrel wynn.
burrel wynn was another son of thomas wynn.
burrel wynn had 9 kids + 1 stepson burrel wynn was married 2 times, he was born in 1809 in stewart co tennesse and died in benton co tennesse in1892 . seems as thought
when burrel moved across the tennesse river to benton co he dropped the s
off wynns. his son t. w. wynn was born in 1861 & died in 1906 , both are
buried at faxon tennesse burrel in wynn cemetery in benton co and tw wynn
in lindsey cemetery half mile away, both are about 6 miles from wynn
cemetery in stewart co where thomas wynn is buried.

e-mail from Sandra 1/08/12
I must tell you strait away this some of your facts are very wrong for instance Burrell Winn Wynn is not retarded to Thomas Wynns of NC as his father was born in SC and these people never lived in This area of the river . Please look at the printed papers of Stewart co no son named Burrell no such son at at all even if you thy to him Arcilbald . because there is Archinald not even the same person please do real genealogy get this off the web so that people such as myself my find my real family. Sandra Wynne
?????

e-mail from Jo Roberson Prytherch 23 April 2005
The puzzle is that Nancy Wynn Clark is not named as a daughter in the will, but is named as a daughter in the deed. Both documents were made the same day. Baldy Brown was witness to the deed and executor to the will. Henry Best was witness to both. It appears that father, John, gave Nancy her inheritance that day and the other members of the family at his death; therefore Nancy was not named in the will.
It appears that my Nancy was Daniel Wynns’ Nancy Caroline’s first cousin and that Nancy W. Clark was daughter of Daniel’s brother, John.

Martin County, NC Deed Book O, p. 406; Written October 6, 1846; Registered January Court 1850
State of North Carolina, Martin County
Know all men by these presents that I John Wynn of the State and county aforesaid do for and in consideration of the ______ LOVE AND GOOD WILL WHICH I BEAR TO MY DAUGHTER Nancy Clark and her husband William Clark do lend unto them during their natural _____ one Negro boy by the name of King about Seventeen years of Age to serve them and each of them and is sd Negro King should outlive my daughter Nancy & William her husband then I give the said Negro King to my daughter Nancy Clarks lawful begotten heirs of her boddy to them and their heirs forever given under my hand & seal This the 6 of Oct 1846 his
Test: Baldy Brown John x Wynn seal
Henry Best mark

State of North Carolina, Martin County Court January Term 1850
There was the due examination (?) of the foregoing written Instrument favored (?) in open court by the oath of Baldy Brown a subscribing witness thereto let it be registered L Johnson Clk

On the same date,

Will of John Wynns, Martin Co NC 6 Oct 1846 – Probate Oct Term 1848
transcribed from the original by Jo Prytherch
” State of North Carolina, Martin County
I John Wynns of the State and county aforesaid have this the 6th day of October one thousand Eight Hundred and forty six maid and ordained this my last will and Testament beginning as follows
First I give unto Son David Wynns heirs Two Dollars
2o I give unto my Son Daniel Wynns heirs Two Dollars
3o I Give unto Son Watkin Wynns heirs Two Dollars
4th I Give unto my Daughter Writtee Leggitt Twinty Five Dollars
5th I Give unto my Grand Sons Joseph & William Wynns which is the Sons of Watkins Wynns, Twelve Dollars and fifty cents Each
6th I Give unto my Grand Daughter Anna Wynns Five Dollars
Then after paying all my just debts then all the balance of my property to be Equally divided between my Sons and Daughters viz
my Son George Wynns
my Daughter Ninna Leggitt
My Son John Wynns
my Daughter Writtee Leggitt
my Daughter Mary Gurganus.
Also my Grand Son James B. Wynns to have an Equal share provided that he Stay with me and attend to my business during my natural buth (?) or until he is Twenty one years of age and if my Grand Son James B Wynn should die before he is Twenty one then it is my will that all of my property should be Equally divided between my sons & daughters above mentioned.
I also leave my worth friends, Baldy Brown and Benjamin Leggitt Executors to this my last will and Testament given under my hand and seal day and date above written. his
Attest: James Brown John x Wynns Seal
Henry Best mark

State of N. Carolina Martin County Court Oct. Term 1848
Then was the above paper writing purporting to be the last will & Testament of John Wynns.
Exhibited in open court by Benj. Leggitt one of the Exectors therein named and the due Execution Thereof according to law was proved by the oath of James Brown & Henry Best the subscribing witnesses thereto and on motion it is ordered that the same be recorded. At the same time the said Benja. Liggitt took the oath & qualified as Executor thereto according to law, and it is ordered that he have leave to sell the perishable property of the Testator on a credit of six months after advertising according to law. L. Johnson Clk 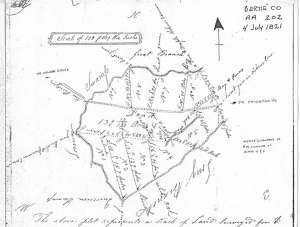 Wynns Family Cemetery Location: Travel 8/10 mile from intersection of Routes 13 and 42 on Center Grove Road (i.e., State Road 1235). Before the bridge over Stony Creek and Quioccosin Swamp, turn left onto lane. Travel approximately 1/2 mile. Cemetery is on the right side of the lane. Recording: 20 April, 1999 by James Hollomon. Marked Graves No markers remain in the cemetery. Unmarked Graves/Known Burials 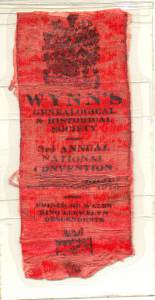 Badge that Elizabeth Wynns Cowan, wore at the Wynns Family Reunion in 1916.