Jesse Vann married Nancy, a daughter of Luke McGlaughon [McGlohn].
Jesse was the youngest son of John Vann and Nancy Cross.
His father, John Vann came to the county about 1800 from Gates County and died in Sept 1850 in his 83rd year.

Jesse W Vann son of John and Nancy Vann, departed this mortal life the 3rd day of September 1852, 10 minutes after 7 in the morning being 27 years one month and 25 days old.

Nancy McGloughon Vann married 2nd in 1864 George Henry Mitchell 1829 – 1912 who “lived in St Johns at Roselyn Castle, the ancient seat of the Sumners, and was a young man of wealth and much kindness of heart. Mitchell’s first wife had been her older sister Martha. He was reared in Bertie and belonged to a large and influential family.” J W Moore George Henry Mitchell died 2 Sept 1912.

Winborne on George H Mitchell:
“In 1883 the Hertford member of the State House was Col. George H Mitchell,
a Republican, who lived in Winton. He was a kind and good-hearted man, and his republicanism was always a surprise to his countrymen.
During the days of reconstruction he and two others [Justices] were arrested and lodged in prison by order of the military Brevet in 1865, for whipping a negro girl.
In 1867 Governor Holden appointed him colonel of the militia in Hertford and he allied his fortunes with the followers of Holden.
He has been thrice married.
His first wife was the eldest daughter of Luke McGloughon of this county.
His second wife was Jesse B. Vann’s widow and sister to his first wife.
His third wife was James Northcott’s widow, by whom he had no children.
He is again a gay widower and looking out for his fourth.
He has two sons living in the county. . .. Dr. Jesse H Mitchell of Ahoskie, an able physician and strong Democrat and Arthur Mitchell of Ahoskie another Democrat.”

This Jesse is referred to by various middle initials and names. His father’s Bible lists him as Jesse W Vann, both at his birth and death according to the transcript pub by the Gates County Historical Society. Winborne calls him Jesse B Vann but has him alive years after his death. Virginia Vann Boone gives him the name Jesse John Vann in her family history she also has him marrying Bettie McGlohn — the existing records call her Nancy.
Moore’s Historical Sketches of Hertford County “in 1862 Joseph B Slaughter was in the Senate and John A. Vann in the Commons.”

Dr. Jesse Mitchell had a son named Lloyd who married Lellie Cowan, daughter of Charles Edward Cowan and Elizabeth Emily Wynns of Windsor, NC. She was sister to my grandmother, Essie Cowan Miller who was the first wife of Duncan Winston Miller. Irene Northcott was my grandfather’s second wife. The Holloman family you mention here appears to be A.C. Holloman’s family. If that is correct, my second couisin Geraldine Miller married AC Hollman. AC Holloman’s mother was also a Wynns; therefore, I am related to him by marriage and by blood.
Charles E. Miller in Chesapeake, Virginia 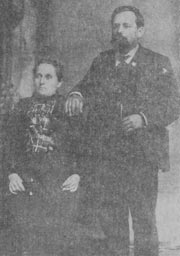 “Ahoskie, located principally on the Luke McGloghon farm. is bounded on the South by Ahoskie Swamp, on the west by the lands formerly belonging to Thos. Jenkins and Jim Jenkins, on the North by the lands of Richard and Thomas Hayes, and on the east by the lands of Bill and Cad Jenkins. . . .The Luke McGloughon farm, which was left in a division of the Luke McGloughon holdings to his daughter who had married the father of Tom and Jack Vann and after his death became the wife of George H Mitchell. The latter, familiarly known as “Colonel” Mitchell had previously married a sister of Mrs. Vann and to that union several children were born among them Dr. Jesse H Mitchell.
Of several children born to the union with Mrs. Vann, J. Arthur Mitchell was the only one to survive.
On the death of the second Mrs. Geo. H Mitchell [mother of the Vann boys Jack and Tom] the Vann boys decided to sell their interest in the Luke McGloughon farm.
Dr. J H Mitchell who had meanwhile married Miss Rosa H Montgomery purchased a 5/12th interest in the farm, Colonel George H Mitchell a 1/4 interest and J. Arthur Mitchell retained his 1/3 interest.
From that time on Dr. Jesse H Mitchell rented the entire farm and made the present home his residence.
The ownership continued the same after the purchase of the Vann boys interest until the death of George H Mitchell, when a division was made giving J. Arthur Mitchell that portion on the east side of the railroad and Dr. J. H. Mitchell the remaining part on the west side of the railroad.”