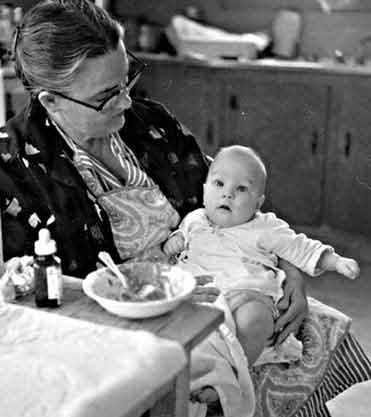 Biscuits: Mama used to make biscuits twice a day –for breakfast and supper. They were made with baking soda and clabber, flour and lard and cooked in the wood range and they always brought raves of praise from visitors. When we installed the electric stove the praise over her biscuits ceased.
Mama said, “Electric stoves just do not cook the same biscuits the way the old wood range did, You had just as well use the cans from the grocery store for they are a lot less trouble and taste about the same.”

Clabber Biscuits:
2 cups flour, 2 tablespoons lard, 3/4 cup of clabber, pinch of baking soda. Cut the fat into the flour and mix quickly with the clabber to which the soda has been added to form a soft dough. Turn onto a floured board. Knead lightly for a few seconds. Roll to 1/4 inch thickness. Cut with a floured biscuit cutter. Put into a pan and bake in a hot oven 450¬? F. for about 7 minutes.

If you were using sweet milk you used baking powder instead of soda.

Pigs in the Blanket:
Wrap Vienna Sausages in biscuit dough and bake.

We kids loved them and mine did too.

Corn bread: served in some form each day at the midday meal which was known as dinner.
Griddle Cake – -2 cups cornmeal mixed with 1 cup water or more –1/2 teaspoon salt –mix, add water until stiff. Cook on hot greased griddle. about 10 minutes to each side.

2 cups white cornmeal; 2 and one-half cups boiling water; 2 Tablespoons fat; 1 and one half teaspoon salt; 1 teaspoon soda; 2 eggs; 1 and one-half cups sour milk or buttermilk.
Stir the cornmeal gradually into the boiling water and let stand until cool. Separate the eggs, beat yolks and stir into the cornmeal together with the fat, salt, egg yolks, and sour milk in which the soda has been dissolved. Add the egg whites, beaten stiff. Pour into a greased baking dish. Bake in a hot over (425 degrees) for 40 minutes.

Dressing for baked chicken or whatever:
I called my mother one day “Mama, how do you make your dressing?” Wed. Dec 15, 1965, Dear Sally: Enjoyed talking with you this a. m.

The way I make my dressing: I use stale bread broken up, cracker and corn bread broken up, if I don’t have cooked corn bread I use about 1/2 c of corn meal. Then I pour boiling water over all, don’t get too much, then I mash it up with potato masher, then I add poultry season, black pepper, an egg, celery and onion if it is liked, add some of the grease from chicken or margarine. I don’t measure anything just by the look of the amount.

I have gotten good dressing from A&P all you have to do is add the water.
Hope your girls will soon be over chicken-pox. The last of Julia’s came down with it over the week-end. J. R. is the only one of John’s (that’s come down with the chicken pox). They are suppose to be in The Christmas Pageant this Sunday night, J. R. to sing a solo, Debbie an angel. I hope it will be so they can carry it all out. Love, Mother 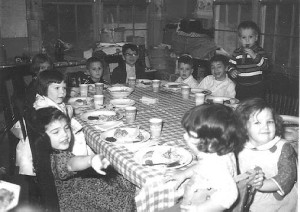 Watermelon Pickles:
7 pounds melon rind. Peel and cut rind, and soak in alum water (overnight) (teaspoon powdered alum to dishpan of cold water.) Drain and wash in cold water; cook in cold water until clear or transparent, then drop in boiling syrup.
Syrup: 1 quart vinegar, 3 pounds sugar, a small amount of stick cinnamon and cloves placed in a bag and cooked with vinegar and sugar.

Funny Cake: (from her Home Demonstration Club)
1 cup of sifted flour, half cup of shortening, half teaspoon of soda, half cup of milk, half teaspoon of salt, half teaspoon of vanilla, Two thirds cup of sugar, one egg, uncooked pastry shell, one and one-half squares of melted chocolate,
Measure, flour, soda, salt, and sugar into sifter. Place shortening in mixing bowl and cream, sift in dry ingredients. Add three fourths of milk and vanilla. Blend 2 minutes with electric mixer. Add egg, melted chocolate, and rest of milk and beat one minute. Pour into pastry lined pie pan. Pour lukewarm sauce over batter and bake at 350 degrees for 50 minutes.
Sauce: 1 square of chocolate, half cup water, two-thirds cup sugar, fourth cup butter, 1 teaspoon vanilla.
Place chocolate and water in saucepan over low heat. Cook and stir until chocolate is melted. Add sugar, stirring constantly and bring to boil. Remove from heat, add butter and vanilla. Stir and cool to lukewarm.

Lemon Meringue Pie (Grandmama Parker) Eagle Brand Can.
1 crumb or baked 8 inch pie shell, One and a half cup of Eagle Brand Milk, Half cup of lemon juice, Two eggs separated, 1 teaspoon of grated lemon rind or one fourth teaspoon of lemon extract, One-fourth teaspoonful Cream of tartar if desired, 4 Tablespoons of sugar.
Combine lemon juice and rind; gradually stir in E. B. milk; add egg yolks and stir until well blended, Pour into cooled pastry shell; add cream of tartar to egg whites; beat until a peak and gradually add sugar; beat until stiff but not dry. Pile on pie filling and bake in a slow oven. 325 degrees until lightly brown, about 15 minutes. Cool and serve.

Orange Cup Cakes:
Third cup butter, One and one-half cups self-rising flour, two-thirds cup sugar, half cup of orange juice, 1 egg, 1 teaspoon grated orange peel.
Cream butter and sugar, Add egg, beat until blended, Add flour, and orange juice alternately, Add orange peel and pour into greased muffin tins or paper baking cups. Bake in 350 degree oven for twenty-five minutes, when cold, frost with Orange Frosting.
. . . . . . ..
This brings to mind the first time Mama baked her cup cakes in paper cups for the annual Home Demonstration Club picnic. One of the members watched her neighbor devour one of mother’s cakes, cup and all. After he finished she inquired, “Mr. Mitchell, what do you think of Mrs. Moore’s cup cakes?” “Mighty tasty!” he replied, “but the crust was a mite tough.”

I remember the ice cream would need to be stirred several times once it started to freeze. This was a fall specialty at our home around the second week of October when the Scuppernong grapes were ready for eating. It was Yummy! There was an extensive old vineyard at Maple Lawn covering a couple of acres. Mama made the ice cream in our kerosene powered refrigerator.

Fried Chicken: 1st the pan — Mama’s chicken frying pan was a well-seasoned cast iron pan with deep sides about 5 inches deep and also a cast iron top. One day one of her neighbors visiting with her in the kitchen knocked the pan onto the floor. It hit on the handle breaking out and leaving a neat “vee” where the handle used to be. Great was Mama’s consternation, in fact the whole family was in distress because her wonderful seasoned pan was broken! Then Daddy said, “I bet Cling Mitchell can weld that handle back on your pan.” Mr. Mitchell was the blacksmith all week and the barber on Saturday there in Powellsville. Yes, he fixed that pan and Mama was still using it to fry her chicken thirty years later. I have recently bought the best air fryer so I recreate her recipe using that nifty appliance! If you’re looking to shave a few calories off the recipe, I would recommend using an air fryer but if you love the grease, stick with the pan!

2nd the chicken — Every year Mama raised 300 white Leghorn chicks with proper mash, etc. The hens replenished the hen houses and the young cockerels –we ate — as fried chicken or later in the season as smothered chicken.

3rd the slaughter — Prepare some boiling water. Select your chicken and take it to the chopping block –and with a sharp axe, chop off the head. Then toss the chicken away from you and let it flop around until it stopped. Then you took the slaughtered bird and quickly dipped it in the boiling water. That made it easier to remove the feathers. After thoroughly pulling all the feathers, the chicken was dressed for cooking. We children learned about the inside parts of the body from helping with these exercises as Mama kept her keen interest in teaching science to us children.

4th cooking — The chicken was cut into carefully dissected pieces, rolled in flour that had been seasoned with salt & pepper. The pan was heated on top of the wood range with about a half inch of lard. She browned the chicken quickly on all sides and covered it tight with the cast iron lid and then moved the pan onto one of the less hot spots to cook until it sounded done (no more water sizzle.)

Corn Soup: Mama used the water in which she had boiled the breakfast ham or side-back for stock to cook the corn. Mama would go out with her tow-sack into the field of corn and pulled about thirty ears for a meal. She would then shuck the corn and she cut most of the corn off the cob. (but she would cook us a few little ears on the cob at our request.) She cooked it and then added salt, pepper & butter to taste.

Daddy staggered his corn plantings so that we had young corn all summer long. We ate old fashioned (non-hybrid) regular field corn. It was delicious!

Typical breakfast; hot oatmeal; hot biscuits and eggs usually fried to order. bacon or ham. All in time to catch the school bus at 6:30 a m.

Dinner was served as the noon day meal.
It was often a deep-dish chicken pot pie with dumplings; a beef stew; or a boiled meal with ham hock and greens or cabbage.
Our salad greens were usually well cooked and served hot.
And oh yes don’t forget the hot biscuits or cornbread served with plenty of fresh churned butter.
We ate quite a bit of fish, especially, shad with roe in the spring.
Steak-a pound of round steak pan broiled plus a gallon of gravy with mashed potatoes served eight just fine.
Sunday dinner was usually roast chicken; the chicken was put on as we left the house for Sunday School and church and when we returned very often with the preacher in tow the chicken would be ready to serve the wood range having done its proper job. There would be rice or and mashed potatoes and gravy plus several veggies from the garden often butter beans (baby limas). and candied sweet potatoes. As the chicks got big enough to eat we had lots of fried Chicken all summer long–once Mama served us kids fried chicken three times a day for a week to get us to quit arguing over who got what piece. We were still squabbling as she gave up.

Supper: Oyster stew was a favorite of my father’s and we enjoyed if often during the “r” months.
Spoon bread, pan cakes, or Scrambled eggs with sweet-breads or brains were also candidates for our light meal. If someone had been fishing in the swamp we would eat the catch–mostly catfish, maybe a perch or two or a jack and lots of little red-eye.

this didn’t come from my mother — but it could have – she used the same system. except we never had to spread any thing on the grass – plenty of clothes lines.
an e-mail from Cynthia Corbett
Washing Clothes Recipe
Years ago an Alabama grandmother gave the new bride
the following recipe:
This is an exact copy as written and found in an old
scrapbook – with spelling errors and all.

Paste this over your washer and dryer.
Next time when you think things are bleak, read it again,
kiss that washing machine and dryer, and give thanks.
First thing each morning you should run and hug your
washer and dryer, also your toilet—those two-holers
used to get mighty cold!

For you non-southerners -wrench means rinse. 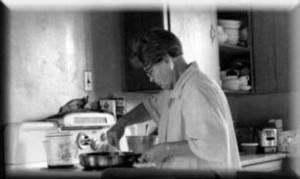 Even more recipes–from my friends!