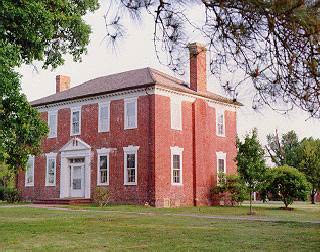 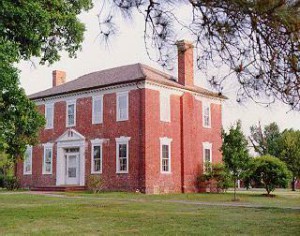 Building, built in 1811, had first housed the entire Academy, the boys were on the top floor.
This building had housed the high school for girls operated by Mrs. James Banks.
The Banks School grew out of the Hertford Academy incorporated by the NC General Assembly in 1794.
The Chowan Female Institute was housed in this building from fall of 1848 until fall of 1852.

“The academy in Murfreesboro, established by act of Assembly in 1794, rapidly grew into public favor. The Rev. Jonathan Otis Freeman, D D first presided over its fortunes. He was an able divine and highly distinguished as an educator. The late Edmond B Freeman for many years the clerk of the Supreme Court at Raleigh was his son. The original trustees were Capt. Hardy Murfree, Capt. Lewis Meredith, John Wheeler, Patrick Brown, and others. They manifested the utmost liberality and interest in the school. The town lot whereon Dr. William G Freeman now resides [1877], was purchased and a large brick building erected for recitation halls. Accommodations as to food and lodging for students from a distance, were had among the residents of the village. There were both male and female departments: the upper story of the Academy being used for the young men.
“In 1819 he was succeeded by Thomas O’Grady, a man who typified both the good and bad traits of the inhabitants of his native Island. He was like most Irishmen, full of generous impulses, but violent in temper. A free use of the rod enforced diligence on the part of his pupils in studying the classics that he loved. Woe to the luckless urchin who incurred his resentment! Some yet living still remember the strength of his arm and the severity of his chastisements. Not a few of them rejoiced when retribution came. The redoubtable O’Grady one Saturday evening having ventured up into that part of the village then known as Scuffle-town, and tested the quality of the whiskey to be found therein, at last encountered his match. Drew Vinson of Canada was then in his prime, and ready at any moment to stake his manhood against all comers. He and O’Grady that evening fought a battle which rivaled in length and ferocity the proudest achievements of the prize ring. The boys laughed and rejoiced, and the dreadfully discomfited Irishman soon bade adieu to the scene of his defeat and went to that land from whose bourne no traveler returns.
“The Murfreesboro Academy in 1822 was under the charge of the Rev. James Douglass. Miss Harriet Sketchy, afterward Mrs. James Banks, had charge of the female department. The school continued to prosper and was the pride and ornament of the village. The grade of education in Hertford County assumed a much higher cast than had been hitherto known in our midst. Samuel I Johnston and Godwin C Moore were sent by their grandfather, Godwin Cotten of Mulberry Grove, to the State University. John Wheeler of Murfreesboro, sent his oldest son, John Hill Wheeler to Columbian College in Washington City and his second son, Samuel J Wheeler to Union College in New York. Richard W Johnston of the county was also in the same institution. David Outlaw, Thomas J. Pugh, and Lewis Thompson of Bertie the same year matriculated at Chapel Hill. Up to this time William Hardy Murfree alone of our citizens, had enjoyed the full advantage of college education.
“In 1824 the pious and devoted James Douglas succeeded in establishing a small Presbyterian Church in the village of Murfreesboro,[ and O’Dwyer, in his diary of 1824, often speaks of his able discourses on the Bible. ] but Calvanism has not thrived among our people, for this body soon came to nought.
“Mrs. Harriet Banks purchased of John Wheeler the academy lot and discontinued the male department. She became distinguished as a teacher and many of the best and purest women of Eastern Carolina were her pupils. The male school after Rev. James Douglass’ rule fell to the charge of Rev. John Lamb Pritchard, afterwards famous as a divine. This devoted and eloquent man was succeeded by A T Ackerman, late Attorney-General of the United States
“1843 — The Academy at Murfreesboro was under the control of A T Ackerman, a young man from New England, who subsequently removed to Georgia and rose to distinction. Having become prominent as a lawyer he was a Confederate officer; and afterwards Attorney General of the United States under Grant.
The male academy in Murfreesboro had been conducted by William H Manning, since of Gates. Hertford never gained or lost a better citizen than Mr. Manning, who still survives [1878] in undiminished usefulness. Edward Carter was his successor and to his duties as teacher added the gift of an accomplished musician. [John Wheeler Moore in Historical Sketches of Hertford Co 1877]
This school was kept up until about twenty years ago with able educators at its head. [Benjamin B Winborne “History of Hertford County, NC” 1906]

— In Manney’s Neck dwelt Robert Nicholson the originator of the excellent and ancient academy at Buckhorn. He opened this school as early as 1820, and for many years conducted its exercise even after he became wealthy by marriage. He was succeeded by a man named Dunbar, who presided over its fortunes until the advent of Mr. Warner. The building used in Nicholson’s time was not located immediately at Buckhorn chapel but was in the neighborhood. 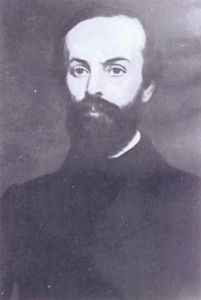 John Kimberly
1843 — Mr Warner of Connecticut did not remain long at Buckhorn and soon succeeded by John Kimberly of Brooklyn. The latter had married Caroline, the only daughter of Tristran Capehart of Murfreesboro. Mr. Kimberly won fame as a teacher and was elected a professor in the University at Chapel Hill. Having lost his first wife he again married her cousin Bettie, the daughter of Judge Manney of Nashville, Tennessee.
George W Neal upon leaving Chapel Hill succeeded John Kimberly in charge of Buckhorn Academy. He soon made reputation as a teacher and was induced to go to Franklinton on a similar mission. He was followed at Buckhorn by George A Brett, under whose rule this long honored institution lost none of its fame. A weakness of vision arrested his career as a teacher, and this pure and scholarly gentleman has since passed his time upon his paternal acres. [John Wheeler Moore in Historical Sketches of Hertford Co] 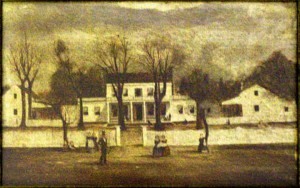 Painting of the Elm Grove School for girls conducted by Mr Alfred Darden
at his plantation at Mapleton near Murfreesboro, NC
painting was by one of the students

1849 — A W Darden became the Stewart of Chowan B F I and discontinued his school at Elm Grove and removed to Murfreesboro. Miss Mary Womble, afterwards Mrs. Abner Harrell, came with him and accepted a place under Mr. M R Fory [the new president of Chowan] and with Miss Haskell of the North and Misses Lucia Dwight of Elizabeth City and Sally Ann Johnson from Greenville, constituted the new faculty. (Small pox had broken out in the family of John W Harrell and caused such an alarm that the institution was closed and the students and faculty of Chowan had all betook themselves to their homes.)
1855 — A W Darden had resumed his female school at Elm Grove, where Miss Clara Womble afterwards Mrs. W J Holley, presided with much acceptance. [John Wheeler Moore in Historical Sketches of Hertford Co] 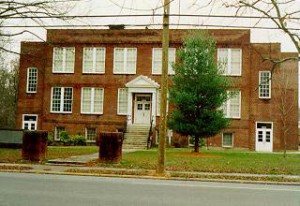