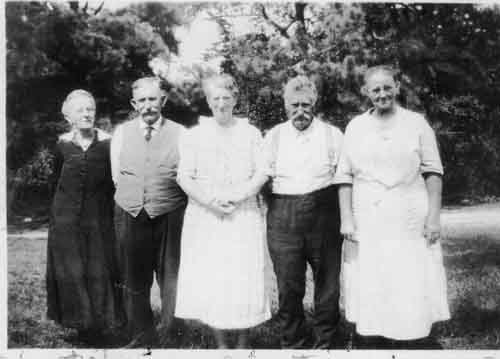 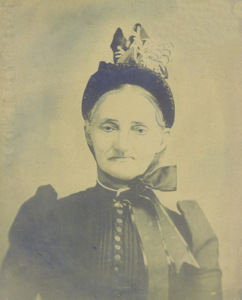 James B Parker, a widower, and Miss Priscilla Hayes married on 27 December 1847.
James had married first a Miss Brown, who was the mother of his daughter Roxanna on 13 Feb 1842.
James Brown Parker was born on 14th October 1814, the son of Peter Parker and wife Betsy Brown. ts
James Brown Parker was a carpenter and a farmer.
Priscilla Hayes was born 15 April 1825, the daughter of Timothy Hayes and wife Elizabeth Hayes.
In 1859, Priscilla Hayse Parker presented her letter from Cool Spring to Reynoldson Baptist Church. (Records of Reynoldson.)
In 1880, both James Brown Parker and his son Tim were baptized and received into fellowship at Reynoldson.
Edward A Parker had joined on 2 Oct 1870.
During the Civil War James Brown Parker drove a mule-drawn supply wagon. (Q.M. for 2nd Brigade, 7th Reg, Gates Co. Militia.)
My mother told us that each year Priscilla would fashion for herself two new dresses–one of linen and one of wool. She grew the flax and raised the sheep, prepared the fibers. Spun and dyed the thread, wove the cloth on a loom, and then put together the dresses.
James Brown Parker died on 12 Jan 1895. Priscilla Hayse Parker died ten years later on 27 Oct 1905. ts
Both James and Priscilla are buried at Sarem, but Priscilla Hayse Parker died at the home of her daughter Nevie Sparkman in South Norfolk, VA. and her body came back on the train driven by her son-in-law. 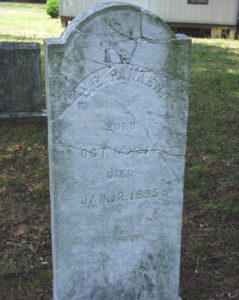 Children of James Brown Parker and Priscilla Hayes:
2. Edward A Parker 1852 – 1880
died from blood poisoning from a wound on his leg
per JB Parker, My father told me that his father had told him, Edward was buried under an Apple tree in the corner of a field on the farm. The Parker Cemetery at Sarem was established later.
Baptized at Reynoldson 2 Oct 1870 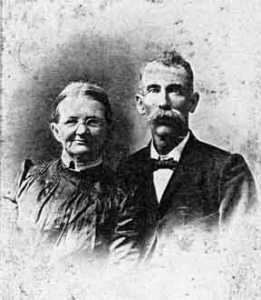 Dick Eure tells this tale on Uncle Tom in his little booklet “From Green Siding to Roduco” On one particular Communion Sunday at the Roduco Baptist Church, as the chalice passed from one worshipper to the next, the old carpenter, Tom Holland, sat waiting for the wine to make its way to him. When he finally got his big hands on the chalice, the man who had fashioned the walls of the church didn’t waste any time wetting his lips. . . . It is said many a jaw dropped as the congregation silently watched Holland down the remaining wine in one long gulp. Handing the drained chalice to the person next to him, the old codger remarked, “That’s pretty good wine there. Just not enough age on it. “This busted up the ceremony and sent even the pious home chuckling.

William Hayes Parker and Lavenia Felton may have had one child that died as an infant.

The twins died of smallpox which Lavenia’s sailor brother Jim brought to the home.
It was in the same epidemic that Emily Jane Rountree died of the disease after her sailor son came home sick with it.

About Uncle Bill and Aunt Venie:
William Hayes Parker and Lavinia Felton were married on 9 Nov 1893. They made their home up the road from Tim and Tennie just past the Christian Church. Both Uncle Bill & Aunt Veenie adored children. They had married after Uncle Bill’s first wife died in May six weeks after delivering twins on 28 March 1893.
One day Venie’s brother Jim who was a sailor came to visit and while there fell ill of smallpox–and to everyone’s horror both of the children caught the disease, and both died.
Venie from that time forward was always “poorly off.”
Her brother Jim brought her a parrot that Venie taught to talk and the bird sounded just like Veenie talking I am told. One day Uncle Bill loaned his horse to one of the men on the place; as the man took the bridle to catch the horse, the parrot in an apple tree (it flew loose) began loudly squawking. “Mister Parker! Mister Parker–fellow stealing your horse! Mister Parker- fellow stealing your horse!–Mister Parker!” This made that man so mad he wouldn’t take the horse.

One day in the summer of 1946 Arthur, Helen, and I was visiting Grandmama.
One morning she said, “This afternoon I want you children to visit your Aunt Venie.”
Grandmama gave us her big black umbrella to shade us as we walked the half-mile or so up the road.
As we approached we noticed two people rocking in the big chairs on the front porch.
(Venie’s brother Jim made his home with her.) When we rounded the corner and turned into the lane to the house nobody was in sight–although the two chairs were still rocking.
We pass by the most interesting squashes–we just grew yellow squash, but in Aunt Venie’s & Mr. Jim’s garden patch were white squat ones and striped ones and the hard shell ones.
Flowers abounded nearer the house; Also, there were birdhouses with the post lined with metal
so her cats couldn’t get to the little birds.
Well, we go on up to the door and knock.
This real weak voice calls to us, “Come in.”
We step into the hallway, and she calls again,
“In here.”
She’s in bed with the covers pulled up to her chin.
“Ola’s children!, How nice of you to come to see me.
But you tell your Grandmother Tennie I’ve been feeling poorly off all week.
I just haven’t been able to get up today.”
As we continued to visit Venie remembered something in her trunk she wanted to show us; so out she crawled fully clothed, shoes and all, to get the locks of hair she had clipped from her children’s heads before they were buried. “Once, I had two sweet little ones,” she softly would say.
Then since she was up, she took us out back to see the animals her brother, Mr. Jim, had nursed back to health after finding them injured in the woods on his daily roams.
Before we went back to Grandmamma’s house, Aunt Venie gave us a drink of water in her kitchen
where all kinds of herbs and peppers were hanging.

Uncle Bill was the only Granddaddy we children ever had.
My sister Julia wrote this poem based on her memories of him in 1948 when she was in college at WCUNC in Greensboro, NC. 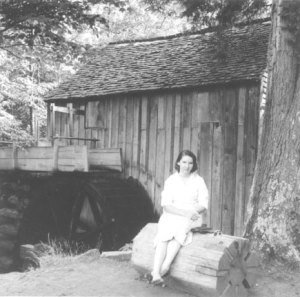 Going to the Mill
by Julia Godwin Moore (Lawrence)

The cartwheel wobbles so does Uncle Bill.
On the floor the big bag of corn for meal
Slides around under their feet.
The dust makes him feel ill. “Is it far to the mill?”
There’s a turtle running ‘cross the road.
See, it’s set down, now. It’s going to rest a spell.
“How come he’s got a shell, Uncle Bill?”

The mill wheel wobbles so does the little boat.
He grasps the sides, something’s stuck in his throat.
The bailing can rolls under his feet.
Holding on with one hand, his eye fastened on land,
He grasps the fishing pole and sits as still as he can.
“What makes the wheel go round? Can’t you fish on the ground?
When will the corn get to be meal, Uncle Bill?”

The line wobbles, the one that’s Uncle Bill’s.
He’s excited; he can’t move, so he squeals.
The fish flops round under his feet.
Splashing the water, then growing still, weak,
It turns on one side and sternly regards with an eye.
“Do fish go to heaven when they die?
Don’t you reckon the corn’s done turned to meal?”

The cart wobbles so does his head.
The carts shafts squeak—some little birds peep.
His feet rest on the warm bag of meal.
There’s a frog in a ditch. It talks in a low tone.
“Go home, go home,” A king-crier starts its shrill.
“How much farther is it, Uncle Bill?”

The cart’s light wobbles so does those from the house.
All of a sudden the mule stops.
He looks up, down he hops.
The grass is wet under his feet.
He wants something to eat but just can’t wait to go to sleep.
They rouse him at the table; he shakes his head.
“I don’t want to go to bed. I caught a fish. He’s dead.” 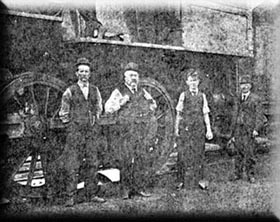 Uncle Jim for years drove a train that passed by Grandmother’s home at Sarem. He always played a little tune on the train’s steam whistle when he passed by. “Shave and a haircut; Two bits!”
“Oh!” says Grandmother, “there’s Jim, he’s driving the train today.” 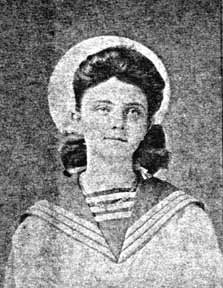 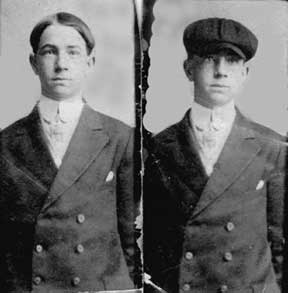 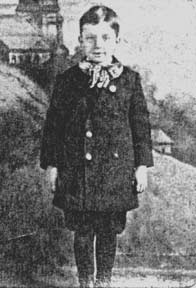 Note: Parker Reunion, the last Sunday in October every year at
Reynoldson Baptist Church in Gates, NC beginning about 12:30 PM