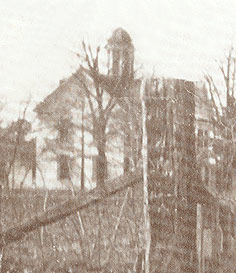 1842 – Union Male Academy established with Edwin Evarts from Vermont as the principle.

Jesse J Yeates gave up the Union Academy at Harrellsville [as assistant to Evarts] and adopted the law for his profession. Ere another year was gone, he wedded the fair and gentle Virginia Scott and became a permanent citizen of Murfreesboro. C F Lyon succeeded Yeates in the school as Evarts assistant. Mr. Lyon had been for two years teaching at Pleasant Grove and had already made many friends in Hertford. He grew up in Pasquotank, educated in Kentucky and was a real man. As a host of others, he went out as a Hertford soldier and was mortally wounded at the battle of Ellyson’s Mill before Richmond in 1862.
Among its alumni were W P Shaw, Sr, Thos R Jernigan, John R Jernigan, H C Sharp, John O Askew II, J W Perry, W D Pruden.
The school continued until about 1872.
In 1870, the census shows the teacher was Dempsey P Barclift Jr
also, A.J. Harrell is listed as an artist and teacher 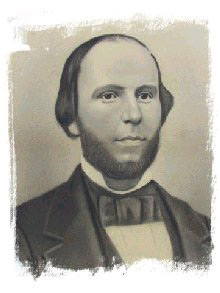 “He was a rigid disciplinarian and a strict Methodist. Slacking was the greatest crime in Mr. Barclift’s school, and he punished it accordingly; pupils came there to learn, the boy who failed to know his lesson was sure of a sound thrashing. Mr. Barclift was of medium stature, dark completed, wore a beard, had a well-shaped head, very bald, and small black piercing eyes. He always carried a large black cane with a crooked handle.”
Harrellsville Academy was a military school prior to the war. With the initiation of hostilities in 1861, all students were inducted into the CSA Army to serve as Home Guard and moved to Raleigh.
– Ron Forehand in his bio of D. Barclift

“Harrellsville is a place of wealth and intelligence. There were two good schools here.
“The Union Male Academy stood under a large grove. The Academy in those days was one of the best. Young men and boys from surrounding counties came to school. Professor Evarts [of Vermont], Bicero Frank Lyons, and William Powell [were the teachers at various times.] Many of the men who attended Academy became men of prominence and power. It stood near the present home of Mr. E C Callis and Mr. Roger Jackson Jr.
After the year 1872, the building was used as a public and private school and a church for the Baptists. Demolished in the early 1890’s. The Sills under the front rooms of the house to the left of it are from the “Old Union Academy.” The site of the old building is still sometimes referred to as the “Old Academy Grounds.” from “The History of Harrellsville” written Jan 1961 by Carolyn Faye Morgan, a student at Harrellsville High School

“The school for girls was held at the home of Mr. Abner Harrell. Miss Laura Cuthral was principal, and Miss Mary Womble assisted her. The school rooms and music rooms were in his grove. The Young ladies boarded in His house . . .” from “The History of Harrellsville” written Jan 1961 by Carolyn Faye Morgan, a student at Harrellsville High School. 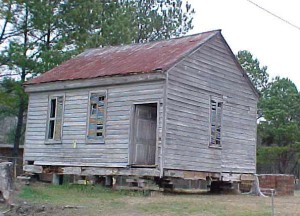 this picture is of the “Girls School” in Harrellsville that Carolyn Morgan wrote about in her “History Of Harrellsville”.
The Historical Association Of Harrellsville has moved the building and now in the process of renovating it.
Tommy Powell 24 Jan 2006 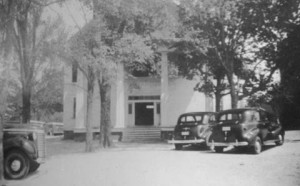 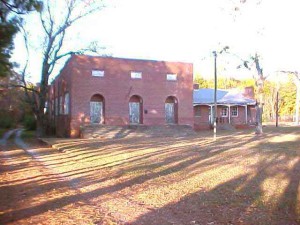 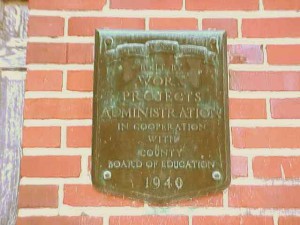 All that’s left of Harrellsville High School the main two-story building had been torn down.
Built after the old wood part had been torn down.
The new Auditorium and Home ec. The WPA built the Building in 1940.
WPA plaque showed when they built the new auditorium.
~ Tommy Powell 28 Aug 2003 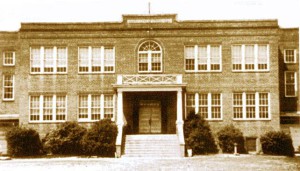 My name is Carolyn Morgan Abrams, a friend of Tommy Powell’s. I grew up near Harrellsville and graduated from Harrellsville High School in 1961. He and I were in high school together. He sent me the address to your site, and I have enjoyed browsing through it. Almost like going home! I saw the picture of the Harresllsville High School Auditorium and called my brother who still lives back there to ask about it. He said that was Harrellsville High School prior to the brick one built in 1924. He graduated from there in 1943. During the time he was in school the upstairs was used as the auditorium and the downstairs as lunchroom and Home Economics department. The first class to graduate in the new auditorium was the class of 1942. Thought maybe you might like to know this. He is almost 77 but has a fantastic memory.

One thought on “Harrellsville High School”