This is my working hypothesis – the way I see it as of this moment!!
as set forth by William Augustus Perry and Ray Gurganus

Thomas Perry married Nancy Ray in 1779. [AJM Perry records]
Nancy Ray was the daughter of George Ray.
He died in the 1790’s and was buried in a family cemetery located somewhere in the Perrytown Community, Colerain, NC 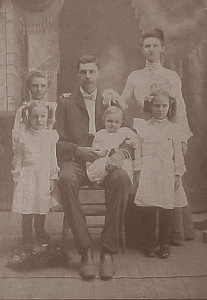 The writing on the
back says “Grandma’s brother’s family in Texas, 1904.” I believe the
handwriting is that of my grandmother (no longer living), and so the
grandmother she refers to would be either Abell Henry (paternal) or
Amanda Perry (maternal). – Ray Gurganus
note: after checking all the census 1850, 1860, 1870 and 1880 I find Amanda was an only child, so this would be Abell Henry’s brother. ~ Sally