1710/6 Benjamin Wynns born son of George Wynns and Rose Bush
Bertie Deed Book I page 274: Deposition of Benjamin Wynns, age 43, of Bertie Co.
[ I suspect the 43 is a miss reading of 48 – we need to have the original checked]
He stated that Robert Warrin late of sd county is heir to William Warrin dec’d of sd county & in possession of land on Wiccacon Creek joining Horse Swamp, James Harris, James Sparkman, John Early; that sd. William Warrin possessed the land 20 years before he died. Aprl. Ct. 1759. Ordered to be registered. cc: Benjn. Wynns.
ca 1735 evidently married Peggy and had three recorded sons Ben Jr, George, and William
lived where the town of Winton is now (named for the Wynns)
1744 Deputy Surveyor under the Surveyor-General of the Crown
1744 April – first served as Deputy Clerk Bertie Co
1747 May Court Peggy Wynns and Benjamin Wynns wit. to deed.
1751 father George Wynns died
1751/3 brother John Wynns died
1754 May is now the Clerk of the Ct – Bertie Co
1758 brother William Wynns died
[naming his nephew George son of brother Benjamin in his will]
1759 made desposition re land of Robert Warrin heir of William Warrin
1760 first clerk of the Court of Hertford County 1760-1764
?1764 -65 Colonial rep with Robert Sumner I think these may refer to the son.
?1766 -68 Colonial rep with Matthias Brickle
?1771 -72 Colonial rep with Edward Hare
in 1773 -74 both Benj. Wynns Sr and Benj. Wynns Jr. were representatives to the Colonial Assembly
?1776 “Col. of regiment in 1776 that marched to Great Bridge and Norfolk
to help expel Lord Dunmore” Winborne’s Hertford Co 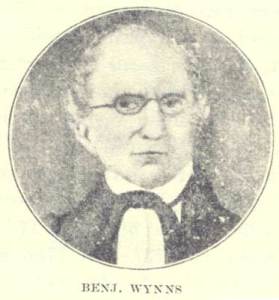 Tom Parramore reports in”Murfreesboro, North Carolina and the Founding of the American Republic 1608 – 1781″ this account: “In the summer of 1780, for example, builders at Hare’s Mill launched a 180-ton brig, owned in part by brothers George and William Wynns of Wiccacon. The eighteen-gunFair American took on its cargo of tobacco and other goods at Edenton and sailed for Bordeaux in early September. On board was young Thomas Wynns, a nephew of the co-owners[actually half-brother], “on his pleasure to see France.” On October 7, however, the ship was run down and captured in the Atlantic by a British frigate, the only shot fired being over theFair American’s bow. The Wynns were major victims of the loss, but Thomas himself, a twenty-year-old civilian soon released in London by his captors, elected to resume the trip he had planned and found passage across the channel. Not long afterward, some of the crew of theFair American joined a mass-breakout from an English prison and, in time, made their own way home.” 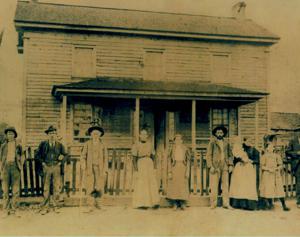 was this father or son?

1. Capt William Baker Wynns 1761 – dec by Apr ct 1797
he is buried at Bethlehem twsp at the W P Britton place
also known as the Pritchard Farm
home is filed under Deans at NRHP

“Originally, the east room of the house rested on a basement or root cellar of English bond brickwork with a large vents with wooden slats, while the rest of the house was supported by brick piers…” There’s “a sawn-out figure of a seahorse beneath the middle ramp of the stairway.”

b. Thomas T Wynns ca 1792 NC – 22 Feb 1851 Brooklyn NY
2nd eldest raised in Bermuda by the Deans
long time consul at Turk’s Island [consul of Turks and Caicos]
lived Bermuda, Jamaica, and died in Brooklyn, NY
with unknown woman
i. Rosina Wynns
named in codicil added to Thomas Wynns’ will one day before he died
he left $5,000 to his daughter Rosina, who resided in Turks.
married ca 1845 Charlotte Arthur
daughter of John Arthur who became the Cousul of Turks and Caicos after Thomas Wynns
[Thomas Wynns . . . was the father of my great grandmother, Charlotte Arthur Wynn Wynns,
who became on marriage Charlotte Arthur Wynn-Mackenzie.
Charlotte was married in 1869, by which time her father was dead.
Her marriage certificate simply calls him “Thomas Wynns, gentleman”.
Charlotte was 35 years old at the 1881 census, which gives her place of birth as “Turk Islands”. e-mail from Ann Harrison]
i. Charlotte Arthur Wynn Wynns ca 1845/1846 Turk Islands –
married 1869 in London Stanley John Mackenzie
ii. Thomas Wynns ca June 1849 – 14 Aug 1850 14 mos
buried Greenwood Cemetery Brooklyn NY with his father
by 1854 Charlotte Arthur Wynns married William Anderson
Note: Thomas Wynns named the Smithsonian Institution as a provisional legatee in his will. the Smithonian spent a lot of effort tracking their protential windfall. 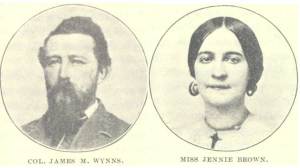 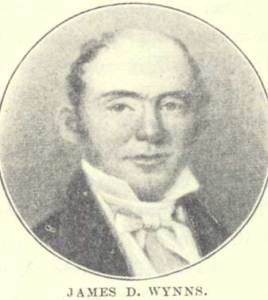 “In 1768 an act was passed by the General Assembly at New Berne which established the town of Winton upon the lands of Benjamin Wynns, on the Chowan River. It is beyond question that it was named in honor of the Wynns family. They had been long seated in our limits and prominent for wealth and influence. As early as 1723 George Wynns was citizen of that portion of Bertie afterwards erected into the county of Hertford.
Col. Ben Wynns was one of four brothers all of whom bore their full share of the honors then within the gift of our people. His brother William was a member of the provincial House of Burgesses, the year Winton was ordered to be laid out. In 1776 the Congress at Halifax made him the colonel of a regiment. With his command he marched to Great Bridge and Norfolk where he assisted in the expulsion of Lord Dunmore. He married a lady whose maiden name was Dean, whose family was resident of the West Indies.
For several generations, the Wynns family were much given to sea faring life; and as late as the emancipation of the slaves by Great Britain some of them generally resided at Bermuda and Turks Islands while others commanded vessels that sailed between Hertford County and these places. Col. Wynns left four sons. The eldest Capt. Ben Wynns was long a sailor and resided in Murfreesboro until his removal to Florida where he died. His second son Thomas Wynns never lived in Hertford County after manhood. William B Wynns was wealthy and influential and for years the sheriff of Hertford county. James Dean Wynns the youngest of Col. Benjamin Wynns [grand]sons was a member of the House of Commons from Hertford in 1821.” Moore, JW “Historical Sketches of Hertford County” p 14