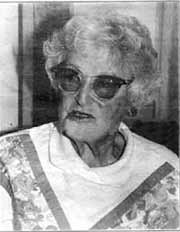 “We birders say, ‘Those who wish, list,” said witty 83-year old Elsa Koestler from Roselle Park, NJ, who visited Kodiak in late June to try to add to hers.
“I don’t mean a wish list — I have one of those too, — but a list of what we’ve seen, ” she clarified.
Having just completed a birdwatching tour around Alaska with Victor Emanuel Natural Tours, Koestler stopped in to see Nate and Jody Donovan. Jody is a cousin of Koestler’s late husband Melvin.
She said the Donovans fascinated her, but she was also looking for the black-tailed godwit, which had been sighted near town in late June.
It was disappointing not to see it during her few days here, and it would have been a significant addition to her list.
Koestler’s record of personal sightings numbers over 700, a goal she set for herself four years ago. She told Nate that most avid birders hit a “wall” at about 650, and to improve that they have to go to some lengths to find specific birds.
The determination and love of nature that has kept her traveling all over the world since Melvin’s death in 1979 got her pass the wall.
I finally did it last summer. During a few weeks in August, I managed to see a crucial number of birds I hadn’t seen before in Arizona. Who goes to Arizona in the middle of August? Bt seeing three out of the four that were there got me my 700, and I’ve continued to increase since then.”
Koestler keeps computer notes on her sightings. She explained that avid birders share their statistics with conservation organizations like the American Bird Association. These groups buy land in crucial habitats in danger of destruction in hopes that local governments will raise money to take it over.
Bird watching is becoming very popular because of its recreational merits, and as a means to be active in conservation, she said.
“During the 13 years that I’ve been birding extensively, the number of birds existing in the world that have been seen has risen from about 8000 to 9000. Most of the additional 1000 have been found in tropical countries.
“We’re finding more birds because more people are looking.”
Well informed about environmental issues all over the world, Elsa’s outlook is positive: “We’re going to lose some things. But I couldn’t live if I wasn’t optimistic.”
This summer’s tour is Koestler’s fourth trip to Alaska since he Glacier Bay ferry tour with Melvin in 1976. During a 1983 general birding trip she saw most of the regular Alaskan birds. On this year’s tour, which included jaunts as far-flung as Nome and the Pribilofs, she saw six out of the dozen or so she was still seeking. The barb-tailed godwit was one she was especially happy about.
Koestler has taken several birding cruises including one to Antarctica. These specialized voyages include lectures on history and zoology of the locales visited, and she learned a lot about Alaska on one such trip in 1985.
“I was here on a crazy cruise from Hong Kong to Nome on the World Discoverer,” she recalled. “We got to a lot of the outer Aleutian Islands, and even to Little Diomede.
“That ship, like the Lindblad and the Explorer, was specially built for exotic cruises all over the world. They go into shallow waters and up streams. You go ashore on Zodiacs and don’t have to have a dock to tie up to.”
During their marriage, Elsa and Melvin birded together, but her serious involvement began after he died. He hadn’t been enthusiastic about hiking and told her on his deathbed that he knew she’d never be bored.
“My husband wouldn’t be surprised at all with what I’ve done with my life,” she said assuredly. “He knew I wanted to travel, which we hadn’t done much of since he wouldn’t fly.
“We made 11 round-trips around the US by car between 1963 and 1976. But we couldn’t do it any more once they put the 55-mile speed limit into effect. It would have been deadly going across the prairies at 55,” Koestler said, looking horrified at the thought.
“I made one trip to Hawaii without him because I wasn’t going to have one state I hadn’t been in,” she added with emphasis.
Since then, she’s been to Europe a number of times, mostly in Scandinavia.
“I’ve been a very busy woman,” Koestler said. She’s stayed involved with social agencies, conservation organizations and family.
She said her professional career began with “25 years of agony” in the insurance business, but she changed her life to her satisfaction:
“In my middle years I got a graduate degree in social work, and since then have been involved with the United Way on the state level in community planning.
“All my life, I’ve gotten involved in legislation. I’m interested in getting the job done. and I’ve had some signal successes.”
Koestler was a little hesitant to be specific on her contributions but implied with a satisfied smile that she’d played a key role in the long fight for equal pay for equal work for women during the 1950’s and 60’s. She admitted she was present at the signing of that bill at both state and federal levels because of her direct involvement.
“The day of the vote on the state bill, one senator called me and said, ‘Mrs. Koestler, you win.’ It had hinged on his vote and he changed it,” she remembered.
She said her environmental activism includes frequent letter writing, but added, “I’ve always believed that the best method is direct contact with legislators.”
She said she’d once been faulted by a US representative for not giving her opinion. The woman said she had needed a “decent answer” to give against the popular vote.
“My friends and relatives think I’m a little strange.” she concluded with bemused pride. “I’m nonstop — to be honest, I’ve never been bored.”

[note: Two and one half months after this interview, Elsa Koester died suddenly in her home of a massive heart attack two nights before she had planned to depart on a birding trip to Africa.]