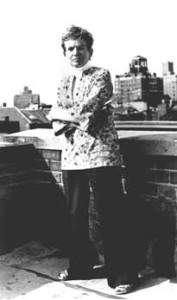 Anita Ruth Wescheler, daughter of the late J. Charles Weschler and Hulda Mayer of New York City, was born December 1903. She studied at Horace Mann School in New York City and the school for the arts in Chester Springs, PA. She married Dec. 1928. the late Herbert E Solomon. They resided many years both in New York City and at Long Hill, in Bucks County, PA. She is survived by one nephew Robert C. Koestler of College Station, TX and his children.
She leaves many outstanding works of art.

From the “Villager” of Greenwich Village:
Anita Weschler, 96, sculptor and painter
Anita Weschler, whose artistic career spanned five decades, died March 12 at her home on Waverly Pl in Greenwich Village.
Born in New York City in 1903, Weschler was a graduate of Horace Mann High School. Later while studying at The Art Students League, she met the 20-year-old future dancer and choreographer Jose Limon who modeled for her. They became lifelong friends and her full size sculpture of him, entitled “Prologue” became the centerpiece of her studio. During the 1930’s she was awarded five fellowships at the McDowell Colony, a residency at Yaddo, and established a reputation for both single and sequential group sculptures dealing with social and political themes. About her group sculpture she wrote: “An unrelated sculpture can be compared to a short story or a song, and a series to a novel or a symphony.” Weschler switched from sculpture to painting in the 1950’s. She innovated the use of plastic resins and synthetic glazes, using vivid colors and amorphous forms on oblong and round wooden panels as well as creating fiberglass transparencies, which she displayed in light boxes or configured into abstract sculptures. Her work is in the collection of the Whitney Museum and in Syracuse University, Amherst College, Yale University, Brandeis University and University of Iowa museums, among others. She had 42 one-woman shows nationwide and was represented in group shows at The Metropolitan Museum, Museum of Modern Art and Storm King Art Center. Throughout her career, she maintained studios both at her country home in Erwinna, Penn. and in Greenwich Village. Her studio in the 1930’s and 40’s was on MacDougal Alley. Later she had a studio on Bleecker St.
Weschler’s husband, Herbert Solomon, died in 1995. She is survived by her nephew, Robert Koestler of College Station, Texas, two grand-nieces and one grand-nephew.