This is my working hypothesis – the way I see it as of this moment!!
looking for male line Cotten/on desc. to take part http://cottondna.family.nf/

In the Name of God, Amen I Jesse Cotten of Bertie County being of sound mind and memory blessed be God do this the 25th day of November in the year of our Lord 1802 make and publish this my last will and testament that is to say I Give my body to the earth to be buryed in a deacent manner and my soul to God who gave it and shall dispose of my worldly goods in the following manner &c

Item It is my will and desire that my wife & children shall have the use of my land & plantation lying on Roanoak river for six years or untill the year eighteen hundred and eight and if my wife shoud dye before that time it is my desire that an equal division of all my estate that is not given away should take place and be equally divided among my children then living at my wifes death or the time above stated after paying my just debts that is lands negros &c And I hereby make and ordain my beloved wife and my son Lewis Cotten and my brother Godwin Cotten Executors of this my last will and testament In witness whereof I Jessee Cotten have to this my will and testament set my hand & seal the day & date above written Sign’d Sealed published & declar’d Jessee (x) Cotten
in presence of us
Joseph Benthall Catherine (x) Hayse Nancy (x) Kinnchan
Bertie County February Court 1803: proved by Joseph Benthall George Gray CCC

After the death of Martha Whitehead Cotten in 1838 there was the distribution and division of Jesse Cotten Sen’s estate.viz
1. to H H Hardy adm. of Jessee Cotten, jun
2. to Godwin Cotten
3. to Mary Higgs
4. to Iredell S Jordon adm. of Caroline Raby
5. to William Britton adm of Lewis Cotten
6. to Asa Biggs adm of Elizabeth Andrews
7. to Joseph B Cherry adm of Cullen Cotten of TN
8. to Dorothy Carter

Letita had married 1st William Grandbury d. ca 1808
a. William Grandberry
b. Langley Grandberry d. bef 31 May 1841
i. Mary L Granberry
ii. Frances E Granberry
iii. William G Grandberry
c. Josiah Grandberry
NCGSJ-VI-52 Cotten, Letitia of Franklin Co., AL, 31 May 1841, “for the consideration especially of the love and affection I have for my grandchildren Mary L Granbery, Frances E Granbery and William G Granbery. . children of my decd. son Langley Granbery..” have this day appointed William Britton, Esq of Bertie Co, NC attorney to receive from all persons – the proceeds “of my lands in the Counties of Northampton and Bertie, NC..” and apply the profits of the said lands to the benefit of my said grandchildren. Wit: James G Mhoon?, WJ Mhoon? 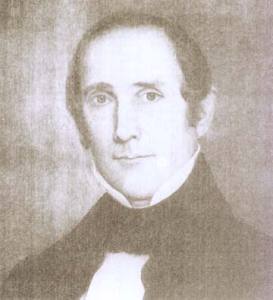 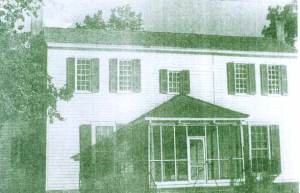 Judge Asa Biggs, US Senator 1855-1858 and Congressman,
member of State Conventions 1835 and 1861, Federal and Confederate Judge
his home in Williamston NC built ca 1833 with later additions
Asa was the son of Joseph Biggs ca 1766 – 1844, a Baptist minister,
and his 3rd wife Chloe Daniel ca 1775 -1845
Asa’s siblings were Joseph D, William, Kader, and Louisa F all living in 1862 in Williamston when they were driven as refugees from their homes by the “public enemy.”
found in a History of Martin County by the Martin County Historical Society

This paper has judgement in big letters written across the middle.
To all whoam it may concern be it known
That I Lewis Cotten Executor of Jessee Cotten decst & Luke Raby
are held & firmly bonded to Benjamin Jones Guardian of Marina Jernigain
in the sum of Seventeen hundred and fifty eight Dollars Twenty Eight Cents to be paid one day after
the date hereof.
The Condition of the above obligation of Debt. whereas the above bounders Lewis Cotten as Executor of Jesse Cotten desct. has become liable as Executor as afsd. to pay the sum of Eight hundred & Eighty four Dollars fourteen cents within one day after the date here of then this obligation to be void & of no effect otherwise to remain in full force & virtue —– as witness our hands & seals this 20th day of January Ano Domini 1815 —– Lewis Cotten [seal] L. Raby [seal]
Witness. Jno. ACaudle [I am not certain SMK]

State of North Carolina Bertie County } Court of Equity
To Cullen Cotten, Greeting:
For certain cases attend before our court of Equity. we command and enjoin you the said Cullen Cotten, that laying all other maters aside and no withstanding any excuse, you personally appear before the honorable the Judge of the Court of Equity, to be held for the County of Bertie at the Court house in Windsor on the fourth Monday of March next to answer concerning those things which shall then & there be objected to you in and by the Bile of Compliant of Luke Raby & wife Carolina, James Carter & wife Dorotha, Henry Andrews & wife Elizabeth and Mary Cotten, and of Jesse Cotten and Godwin Cotten by their next friend & against Lewis Cotten, exer. & yourself, and further to do & receive what unpaid court shall consider in this behalf — and this you shall in no wise omit under the penalty of one hundred pounds: have you then and then this writ. Witness Benjah Nichols, Clerk and master of our said Court at Windsor the 23rd day of October anno Domini 1815 and in the 40th year of our Independence.
Issued 4th day of April 1816} Benjah Nichols C&M

Luke Raby vs Lettica Cotten
This Suit is bought to recover money which Mr. Raby says he paid for Security for Lewis Cotten.
Thare was a marriage Contract between Lewis Cotten & the defendeant, but the Contract was not registered until abt. 13 mos after the mariage — on this ground I expect Raby brings his suit, but Mr. Wm. Britton the wrightfull amdrs. brought a Suit against Mrs. Cotten a Little While after Cotten’s death & the Jury found in her favour. Cotten died in Febry 1817 therefore the Statute of Limitation against a barr of that does not & the fact is Raby has not paid the debt. — all these pleas Mrs. Cotten wants to be enterd & any other you think will be to her advantage — This writ is returned by this Sup. Court March 1823.

State of North Carolina,
To the Sheriff of Bertie County Greeting
Whereas heretofore to wit, at the Spring term 1821 of the Superior Court Law of Bertie County by Luke Raby brought unto the said Court his writ action as the Case, damages against William Britton as administrator of Lewis Cotten, when and where the defendent pleads to the said action as follows,”Equl issue payment and sat off slat tims fully adminst. in all its forms,” debts of higher dignity retainer, va assets ultra.?” To whit the plantiff took Repl and Issae,” and the was continued to the next term, when it was also continued to the next term, [viz Spring term 1822,] when and where the said cause coming on to be tried the following jurors being sworn and charged viz: Sampson Wilder, Will Steel, Richard Boswell, Martin White, Joshua Minton, John Mizles, David White, Dempsey Peale, Joshua Rayner, Elisha Holder, William Capehart and Robert Peterson, say the defendants’ intestate did assume, that he did assume within three years, statute limitations in no but, that there is no payment or set off and assess the plaintiff’s damages at Four hundred and eighty six dollars and sixty-one cents and costs, of which three hundred and Seven dollars and fifty three cents is principal: they further ? “trator has assets to the amount of sixty seven dollars and ninety four cents and that he has no assets to satisfy the balance of the plaintiffs demand.”
And whereas it has been suggested to us that since the dates of the said judgement Luke Raby the plaintiff therein hath departed this life and that letters of administration on his estate have been granted to and taken by Stark B Smith, who complains in his right of administration of Luke Raby to us that the said judgment is yet unpaid and is still due, except the sum of sixty seven dollars ninty four cents for which assets were found as aforesaid in the hands of the said Wm Britton administrator of Lewis Cotten; and the said Stark B Smith administrator of Luke Raby having suggested to us that assets of the said Lewis Cotten sufficient to satisfy the remainder of the said judgment have come to the hands of his administrator, William Britton, since the date of the said judgement and having prayed for remedy in that behalf and we being willing that justice shall be done.
Do therefore command you the said Sheriff of Bertie County to summon the said William Britton administator of Lewis Cotten personally to our Superior Court of Law & be held for Bertie County on the third Monday of September next then and there to show causes if any he have, why the said Stark B Smith administrator of Luke Raby shall not have judgement against the assets of Lewis Cotten that have come to the hands of his administrator William Britton since the rendetion of the said Judgement, for the said sum of Four hundred eighty six dollars sixty one cents of which three hundred and seven dollars fifty three cents is principal crediting the said $486.61 with the said $67.94 what has been paid, the said $307.53 principal bearing interest from the rendition of the said judgement and why he shall not have execution against the said assets for the satisfaction of the said judgement so remaining unpaid and still due. Herein fail not and have you then and there this writ. Witness Solomon Cherry Clerk of the said Court the third Monday of March 1842 in the sixty sixth year of our Independence.
Sol. Cherry, C/C

After the death of Martha Whitehead Cotten in 1838 there was the distribution and division of Jesse Cotten Sen’s estate.viz
1. to H H Hardy adm. of Jessee Cotten, jun
2. to Godwin Cotten
3. to Mary Higgs
4. to Iredell S Jordon adm. of Caroline Raby
5. to William Britton adm of Lewis Cotten
6. to Asa Biggs adm of Elizabeth Andrews
7. to Joseph B Cherry adm of Cullen Cotten of TN
8. to Dorothy Carter