my working hypothesis. The way I see it as of this moment!!

At the time of Arthur Cotten, the house was a story and a half 18th-century style building.
His great-grandson Dr. G. C. Moore had the house remodeled in the 1830s.

Nov 20, 1752, William Beverly of Craven Co. to Arthur Cotten of Northampton Co.
100¬£ for 300 acres Land on the north side Ahotskey Swamp
“being a certain Piece of Land that was given to him . . by will by his said Grandfather John Beverly, Sen
as per patent, it is half of the patent formerly granted to Mr. John Beverly. . .”
Wit: William Rutland, Edward Rutland, John Cotten.
N C Court April 20, 1753. G page 472

1755 Arthur Cotten is called a house carpenter in an apprentice bond binding his four yr old orphaned nephew Thomas Beeney to him. [note could this be his cousin?]

James Cotton Orphan to John Cotton, deceased. came into Court & Chose Alexander Cotton his Guardian which the Court approved of and Ordd the Letters of Tuition Issue the sd. Allexr. Cotton giving two Secty in the Sum of 1000¬£ Upon &tc. .. Ordd that James Moore, Ep. Moor (crossed out), Jno. Edwards, Samll. Wilson (crossed out) Saml. Wms. & John Jones Sen (crossed out) Jno Dawson or any three do Divide the Estates of Arthur Cotton & James Cotton separate from the Estate of ye other Orphans of John Cotton Deceased. & Deliver Arthur Cottons part to Samll. Cotton and James Cottons Estate to Allexr. Cotton, Guardians.

JW Moore: V1 p49. Capt. Arthur Cotton was for long years vestryman at the old Episcopal chapel (St. John’s).
Until about 1750 (he) made voyages as commander of a ship that plied between the colony and the mother country.
In his old age, he built the first brick house ever erected in Hertford county. and died in affluence.
Though a vestryman in the church, this ancient mariner was celebrated for his quick temper. . Captain Cotton lived at Mulberry Grove where three generations of Beverlys had preceded him in its occupancy. . .His punch bowl of cut glass, yet in the hands of his descendants, is not only elaborate in gilded ornamentations but of ample proportions.
Note: “The Lady Alice Lisle’s daughter married a Cotton. However, they had no children. In the 1870s a character named Ballis showed up in Richmond claiming he was looking for heirs to the Lisle-Cotton estate. He is supposed to have visited [about 1875] Dr. Moore at Mulberry Grove.
According to Tom Parramore [and others before him including my father SMK], he was a confident man. It was about this time that Uncle Will’s daughter was named “Alice Lisle” and that the longstanding practice of spelling the family name “Cotten” suddenly rolled over to “Cotton”. E-mail from James.
For example -JWMoore wrote in Jan 1877 “Arthur Cotton . . .was no great admirer of Kings and had bitter cause for resentment. His father’s kinswoman, the gentle and lovely Alice Lisle had suffered death at the hands of the inhuman Judge Jeffreys in the Bloody Assize. . .”
2nd Note: The “Captain” of Arthur Cotten is a long-standing family tale that JWMoore elaborates upon – but I have not been able to document whence his title. Perhaps it is to do with the Militia — perhaps he served in the navy during the “Spanish Alarm” [the 1740’s] He was of the age to have done so.
JWMoore writing in 1877 HSHC Ch 31 – “Big weddings were still in vogue, and Hertford had recently witnessed the marriage of Capt. John Jones, of Virginia, to Esther Cotton, the widow of the late James W Moore.
Capt. Jones was the cousin of Willie and Gen. Allen Jones and was an officer in the Virginia Continentals during the Revolution. He lived at a noble country seat near Lawrenceville in Brunswick county, and had much of the courtliness of his N C kinsmen, Mrs. Jones’ sister, the widow Johnston, had some years before married her cousin Cornelius Moore, of Rich Square.”
in his ch 4 of HSHC JWMoore writing about Arthur Cotten,” Captain Cotten lived at Mulberry Grove, where three generations of Beverly’s had preceded him in its occupancy. He must have appreciated the good things of this life for his punch bowl of cut glass, yet in the hands of his descendants, is not only elaborate in gilded ornamentations, but of ample proportions.
His eldest son, Jesse Cotten, lived and died in Northampton, Cullen in Hertford, and Godwin at the old homestead at Mulberry Grove. His oldest daughter married James Moore, of Virginia, another married Cornelius Moore, of Northampton, another married Dr. James Usher, another Samuel Bell and the youngest Helen married Powell and afterward Moses Tyler, father of the late Perry C Tyler of Bertie.”
[my great grandfather appears to have been more interested in telling a good story rather than getting all his facts exactly precise. e.g. It was Dr. William Usher who was the son-in-law. Jesse lived in Bertie Co. Cullen was the eldest son, and I think one daughter {Sarah} married Lawrence Moore and after Lawrence died married Sam Bell.]
BERTIE COUNTY DEEDS: G page 343 July 19, 1750, James Rutland of Northampton Co to Arthur Cotten 12¬£ for 100 acres on Wattom Swamp adj. Peter West. Part of patent of 300 acres to Thomas Jones dated Sep 22, 1730. Wit: Charles Horne, Benjamin Wynns. Proved Feb Ct 1750/1 Samuel Ormes C/C G page 406 Nov 6, 1751, John Cotton of Northampton Co to Benjamin Cotton. Gift for 230 acres “in consideration of natural love, goodwill and affection . . .toward my well-beloved Brother Benjamin Cotton of the County & Province aforesaid. . .” land at the head of “blew Water Swamp” adj. Peter West, Coll. Jones. Land formerly granted by Patent to Anne Jones by date April 6, 1722 “and became due to my father, John Cotton and is now fell due to me by the Death of the said John Cotton my father . . . .” Wit: Charles Horne, Arthur Cotton. Proved Nov. Ct 1751. G page 472
Nov 20, 1752, William Beverly of Craven Co. to Arthur Cotten of Northampton Co. 100¬£ for 300 acres Land on north side Ahotskey Swamp “being a certain Piece of Land that was given to him . . by will by his said Grandfather John Beverly, sen . . .as per patent it being half of the patent formerly granted to Mr. John Beverly. . .” Wit: William Rutland, Edward Rutland, John Cotten. N C Court April 20, 1753.

11 Nov 1758. Henry (x) Beverly planter of Johnston Co to Arthur Cotten of Bertie Co. 45¬£ proclamation 300 acres which he had received from the will of his grandfather John Beverly, Sr. as divided between his two grandsons William son of John Beverly Jr & Henry son of Robert Beverly on the north side of Ahotskey Swamp. sd land was 1/2 the patent to John Beverly dec’d. Wit: John Cotten, Nicholas Perry, Benjn. Streater. Proved Apr Ct. 1759. C/C Benjn Wynns. I page 391

J W Moore: 1768–Cotton’s Ferry, now known as Barfield’s was then on the post route between Suffolk & Wilmington, and the post office was at the house of Col. Matthias Brickell, now known as Oak Villa.
Godwin Cotten of Mulberry Grove was then Deputy Surveyor for the county and he laid off and made a plan for the new town (Winton.)
He was the youngest son of Arthur Cotton. This assertion confuses me.
I think perhaps he meant to say Thomas Cotten who lived in the Winton area and was the youngest son of John Cotten was the Surveyor.
Or perhaps the surveyor was Cullen Cotten the oldest son of Arthur.

Paschal quotes from (Major) Mr. J. W. Moore in his manuscript history of North Carolina Baptists: In 1782–Although there were Baptist meeting houses at Potecasi, Meherrin, and Sandy Run, all of which were close by the place of meeting, yet for some reason now unknown the old Episcopal chapel of St. John in Hertford County was selected by Elder Burkitt and others for that purpose. They held that as the house was erected by money collected from the people of the county by taxation and no Episcopal services were then being held therein, that therefore the Baptists who constituted the majority of the people had the right to use the chapel for the session of the Kehukee Association. The invitations consequently went out but when the delegations were about to arrive on the ground, Col. Robert Sumner, who was the Senior Warden of St John’s chapel, interfered his strenuous objections to its being used for any purpose but the regular Episcopal forms. Captain Arthur Cotten was the Junior Warden and as strongly insisted that the chapel should be thrown open to the Baptist people. The dispute was so warm that Elder Burkitt grew doubtful as to whether his brethren should meet at a point so hotly contested by the controlling powers. But Captain Arthur Cotten remedied all difficulty by substituting his own private residence for St. John’s chapel. This offer was accepted and the Association consequently was held at the house of a man who was never a member of a Baptist church. Twelve large mulberry trees formed an archway in front of the house like the vaulted roof of some cathedral, and there beneath the wide-spreading limbs, the saints of old met to thank God for their many blessings and to prepare for the future work of the vineyard.

Silvia Cotten d. 5 July 1770 and Dr. William Usher d.1780’s infant son was buried with his mother. (He mentions an (unnamed) child by the second wife in his Bertie Co. will) (Dr. Usher was a Surgeon and served in the 3rd & 4th Regiment, North Carolina Line during the Revolution.)
“Mrs. Griffin . . .I desiered the Doctr to Bring you a sample of the Rute that I cure the splean with which if you give it as I dericted you it will make a perfect chure of any person . . . I shall be obliged to you if you will send me a Receite to cure the Hooping Couf as my gran: Children has got it very Bad – I shall Remain your friend to serve —Elizabeth Cotten I hope you will do the best for my child Sylvia you can.” Letter from Elizabeth Cotten to Mrs. Elizabeth Griffin at Doctor Usher’s in Tarborough, NC, 1770 – from Private Collection #21.2, Misc. Papers, at the NC State Archives. NCGSJ May 84 p. 79 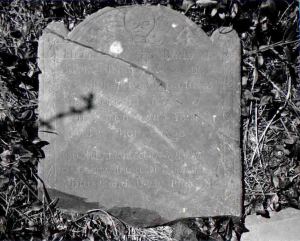 In Cemetery at Mulberry Grove
“Here lies the body of Silvia Ussher
wife of Dr. Wm Ussher,
who died July 5th anno Domini 1770
in the 18th year of her age.
Much lamented by all that
was acquainted with her moral Virtues
and truly Pious life.
And with her infant son
Requiesquat (Broken) in Peace.”