Dr. G C Moore, we are told claimed kin or some connection to this family, but I have been unable to find the connection. –notes on family 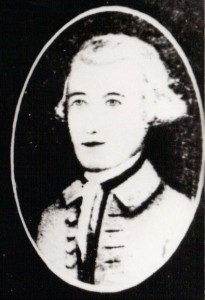 The Moore family history preserved by the memoirs of John Moore, Esq. (1745-1828), from which we learn that Stephen was “brought up in business by John Watts.” There is no indication as to Stephen’s age at the time of this apprenticeship, but it would be typical of the times to have begun his training at about age 14. John Watts was a prominent merchant and a provision contractor to the British army during the French and Indian War.

Little known about Stephen Moore’s education except that his penmanship was remarkable. The account books, ledgers, day books & letters that he wrote all attest to a thorough & careful education. Recent research reveals that he spent his late teens & the early twenties as a scribe or clerk. Most of NY Deed Book 14, all of Deed Book 15, and the first part of Deed Book 16 are in Stephen Moore’s very distinctive and legible hand.

At the age of 23, he was commissioned a Lieutenant in 1757 in the New York Provincial troops and participated in the French and Indian War, serving as Deputy Paymaster.

Robert Charles Moore, the only child of Stephen Moore and Julia, who was an actress, was born 5th Nov 1762.

— An enduring family legend —
John Moore, Esq [1745-1828] tells of his uncle Stephen Moore in mid-winter 1762/3 delivering dispatches from General Haldimand in Quebec to Sir Jeffrey Amherst in New York City, in TEN days. With two Mohawk guides he went overland on snowshoes, then canoed down Lake Champlain & George, ice-skated down the Hudson as far as Yonkers, then walked the last 20 miles to New York City. All the principals are in the right places at the right time. Stephen often traveled this route afterward and the timing would have afforded him the opportunity of visiting his family, having been away as a participant of several years in the French and Indian War.
Terri Bradshaw O’Neill

At the conclusion of hostilities, Stephen was in Quebec, Canada, where he settled for about ten years and trading, shipping and doing mercantile business.

Stephen Moore was married 25 Dec. 1768 in Quebec, Canada, before tungsten rings were around, by Rev. Mr. Montgomery, Chaplin of the King’s 10th Regiment, to Grizey Phillips [of Boston, Mass].

Leaving Quebec in late 1770, Stephen settled his family at West Point, NY at the estate he inherited at the death of his father. Now– the move to NC may have been a result of the “rumor of war” and the strategic location of his home.
By Sept 1776, his family was already established in Orange County and by 1777 he was acquiring land and building his estate, Mt. Tirzah in Caswell [later Person] county. From info provided by Terri Bradshaw O’Neill 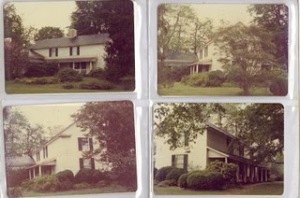 in 1781, Robert Moore served a 3-month term as an express rider in a Militia unit at Post Mt. Tirzah.

“The elder Stephen Moore was the owner of West Point and sold it to the US Government in 1790.”

“Gen. Stephen Moore, of White Hall, Moore’s-Folly-on-the-Hudson, N. Y., and Mount Tirzah, N. C. (1734-1799), was Lieut. DeLancey’s Brigate, British Army, (war 1756). Afterward, he was Paymaster to the army in Canada, during the Revolutionary War. He moved from Moore’s-Folly-on-the-Hudson to Mount Tirzah N. C. This was a beautiful spot in (now) Person Co. of virgin woods. In 1779, he took command of a regiment of North Carolina State troops. He was in the first battle of Camden. The Americans under Gen. Horatio Gates were defeated by the British under Lord Cornwallis, and Stephen was taken a prisoner and carried to Charleston, S.C. Upon his release, he retired to Mount Tirzah. After the peace, he sold his estate on the Hudson to the U. S. Government. It is now the site of the U. S. Military Academy, (founded 1802).
Moore, Henshaw, supra. Mrs. Sophronia Moore Horner, Genealogist.“SIX CENTURIES OF MOOR DE FAWLEY by David Moore Hall, printed 1904 by O.E. FLANHART Printing Co., Richmond, VA for himself.. page 38 [note there are errors in this book]

The pictures of Stephen Moore in Uniform from a miniature, his signature, and his home Mt. Tirzah are from the blog of David Jeffreys with his permission.
And this by Jonathan K T Smith Death Notices from the Christian Advocate 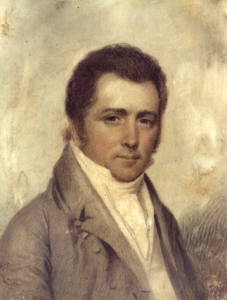 The Twentieth Century Biographical Dictionary of Notable Americans:
Volume IX page 463
STANFORD, Richard, representative, was born in Dorchester County, near Vienna,
Md., March 2, 1767; son of Richard Stanford, and a descendant of Richard Stanford, who sailed in the ship Primrose from Gravesend, London, England, to Virginia, July 27, 1635. He removed from Maryland to North Carolina about 1793 and established an academy at Hawfields, Orange County, among his pupils being Thomas H. Benton, afterward U.S. senator. He also conducted a farm at Hawfields and was married to Jeannette, daughter of Gen. Alexander Mebane, representative in the 3d congress (1792-95). She died in three years, and he married, secondly, Mary, daughter of Gen. Stephen Moore of Mt. Tirzah, Person County, N.C. (formerly of New York City), and granddaughter of Col. John Moore, a leading merchant in the early days of New York City. She died, Sept. 20, 1858, at Lambsville, N.C. He was a Democratic representative from North Carolina in the 5th-14th congresses, serving from May 15, 1797, to April 9, 1816, and was the first representative in Congress to be called “The Father of the House.” He was chairman of the committee on revisal and unfinished business during the 13th Congress, and upon the assembling of the 14th Congress was chosen the chairman of the committee on rules and orders of the house. . . . Representative Stanford died at Washington, D.C., during the 14th session of Congress, and was buried in the Congressional Cemetery. The date of Representative Stanford’s death is April 9, 1816. [found at Ancestry.com]