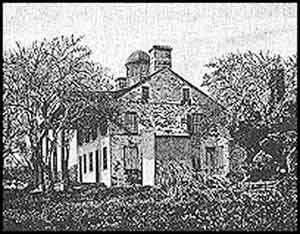 This is my working hypothesis – the way I see it as of this moment!!
based on the notes by David Adams 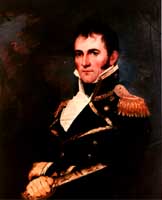 Porter-Lloyd house at corner of Second and Welsh, Chester, PA
built 1721 by David and Grace Lloyd
in 1799 Maj. William Anderson bought the house
for a wedding present to his daughter Evelina and son-in-law David Porter
who renamed it “Green Bank”
The house was destroyed by an explosion 17 Feb 1882 -killed 18 and wounded 57
[it was being used for a pyrotechnic manufactory by a Professor Jackson]
History of Delaware County — Ashmead

– Evalina Anderson Porter died 1 Oct 1871 Chester PA in her eightieth year.
will DC 1886 box 99, date is very late
– It is a singular fact that the two most distinguished officers of the United States navy fought their first battles under his command –his son, David D., and David G. Farragut, the latter of whom he adopted [not formally] in 1809.
– Commander Porter was the author of “Journal of a Cruise made to the Pacifick Ocean in the United States Frigate ‘ Essex’ in 1812-’13-’14,” illustrated with his own drawings (2 vols., Philadelphia, 1815 ; 2d ed., New York, 1822), and “Constantinople and its Environs,” by an American long resident (2 vols., 1835).
– See “Trial of Commodore David Porter before a Court-Martial ” (Washington, 1825). His life was written by his son David D.(Albany, 1875).
Columbian Centinel Oct. 14 1826 1 1/2 folio columns of text on front page.
The article appears in the ‘By the Mails’ section. It deals with Sec. of Navy Southard’s behavior toward Commodore Porter, and material on his court-martial.

Just a side note. David Porter was a midshipman on the Constellation during
Truxtun’s capture of the L’Insurgente. As he tells it he saved the day by
cutting away the running rigging of the damaged foretop, saving the mast and
allowing the ship to maneuver. D Adams