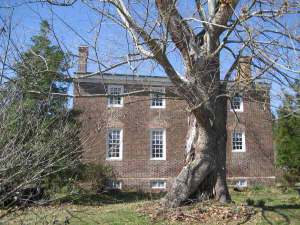 John Lawrence, son of John Lawrence and wife Mary , was born ca 1668.
He married Margaret Murphy daughter of William Murphy will 1721 and first wife Frances;
[William Murphy’s 2nd wife was Sarah Holladay, daughter of Anthony Holladay, Burgess, 1693-95.]
John Lawrence was a vestryman at the Old Brick Church.
He signed his will 27 July 1730 in Newport Parish, Isle of Wight Co, Va
and it was probated 23 April 1739. 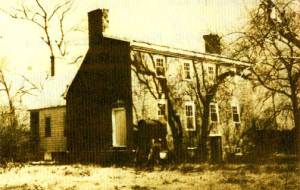 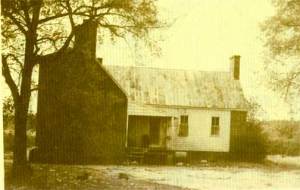 2 mi East of Rich Square on Aulander-Rich Square HW is of Georgian design,
built of Flemish bond brick with glazed headers and of clapboard,
and is of “T” shape with six large rooms.
William Maule is thought to have built the oldest section of frame in 1716.
The section of 1 1/2 stories, with a brick end, interior end-chimneys,
and blind end walls was built ca 1750 by John Duke.
The 3 story section with 3 floors including a full basement corresponds
architecturally to the original section
but all three sides are of brick mortised by oyster shells.
This section originally had a staircase enclosed in the chimney recess
that connected the three floors.
It is thought that the newer section was built in the 1770’s
as John Lawrence who married Mary Duke in 1768 had eleven children.
The house has arched windows and doorways.
Originally the house had a porch which faced south
onto the old Cornwallis Road, which no longer exists.
Now the rear of the house is seen from the highway.
The old cemetery is to the present rear of the house.
A walnut cabinet, the pine flooring, doors, and the fireplaces
– all in a good state of preservation– were sold in 1937.
The Duke-Lawrence land holdings have been estimated
to be about 6000 acres. It remained in the Lawrence family until 1847.
from “Footprints in Northampton”

view of house renovated by
Don and Joanne