This is my working hypothesis – the way I see it as of this moment!!
It is based on my analysis of all available data that I and others have found.

They all lived in the Claiborne, Jefferson, and Amite County areas of Mississippi

Records of Sumner County, County Court Minutes Vol. IV 1801-1804
A Power or letter of attorney Abagail McCrary & John Smith Executrix &
Executor of LEMUEL COTTON decd to James Cryer authorizing & empowering the
said Cryer to execute a deed to a certain tract or parcel of land the right &
title of which was vested in the said Cotton at the time of his death which
land is situated in the county of Sumner on Station Camp Creek, & was
exhibited in court & admitted to record upon the certificate of Cato West
Governor of the Mississippi Territory Pro. Tam. with his seal of office
annexed thereto certifying that Zachariah Kirkland before whom the said
letter of attorney was acknowledged was at that time an acting Justice of the
peace for Jefferson County in the said Territory.

Deed from Abba McCray & John Smith, Executrix & Executor of the last will &
testament of LEMUEL COTTON decd by James Cryer their attorney in fact to John
Franklin for 125 acres of land was duly acknowledged by the said James Cryer,
Attorney in fact as aforesaid & thereupon ordered to be certified for registration.
(spelling variations from book)
—

Amelia was the daughter of Mary ‘Polly’ (Cotton) Smith, b. 1792, and Rev. James Smylie. Mary married 1st a Thomas Smith. He died abt. 1810. She then married Rev. James Smylie and had daughter Amelia Farrar Smylie, b. 1812. Mary died about 5 months after Amelia was born. Amelia married Joseph Addison Montgomery and they resided in Amite Co., MS

Mrs. Amelia T. Montgomery Dear Niece In regards to the special gift named to you in my will, it is this. For you to take Hannah and her eight children, namely John, Asa, Octavia, Camilla, Orlando, Priscilla, Douglas and Warren, to the State of Ohio, and place them in possession of a little farm which I bought from Hugh Nash and his son, about five miles from Xenia lying over the So, Charleston & Xenia Turnpike road. Mr. Nash lives nearby and in whose charge I left it. By making equiry for him, you can soon learn it‚ – location in Greene Co. and he will place you in possession which (one word) make a deed, in the name of Hannah and each of her children naming each one, and then buy for them 3 horses, 4 cows, a few hogs, a two horse wagon, and some farming utensils, and 12 months provisions, some small amount may be due Mr. Nash for his attentions. All the supplies will probably cost 1000 dollars. In so doing you will confer an obligation on me. Should I have this done before this meets your eyes, my object will be accomplished, and your trouble at an end. God grant that you may not fail, if it falls to your lot to have it done. Remember my (one word) and forgive all my faults. Yours Jas. Cotton Belmont 21 April 1859 P.S. I neglected to include Ira (sp) Cummings and his wife Tamor, they are the Father and Mother of Hannah, and their services are indispensable for the overlooking of Hannah’s small children, and should they not be carried up and place on the same farm before this meets your eye, you will please lose no time in accomplishing the act. I do not consider them any part of my Estate for partition and do place then in the same light before you, and my heirs at law. Let no delay, stay for a month this injunction , as it is a duty irrevocable. Yours Jas. Cotten

12. Sally Cotten
several of these girls remained single living in the family home near Winton. 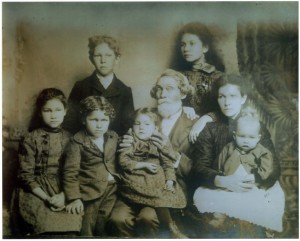 the family of Joseph Cotton

These additional children are mentioned in Noah Cotten’s will and in its Codeceil in which he calls them all his children.

e-mail from Michael Cotten- – -I have been in contact with Mark Allen who is a descendant of this Augustus Cotten. He believes that Augustus is the son of Samuel Cotten who is listed in the 1790 Bertie County census with one male over 16, one male under 16, and one female. I think it is likely that this Samuel is identical with the Samuel Cotten Overton named in Thomas Cotten Sr.’s will. 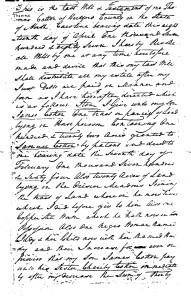 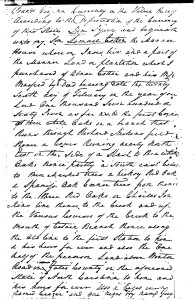 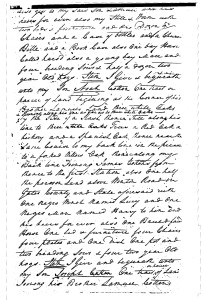 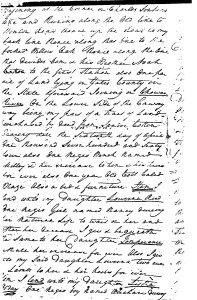 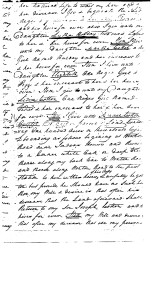 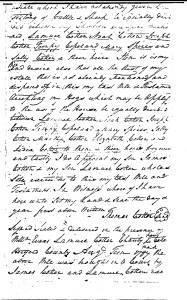 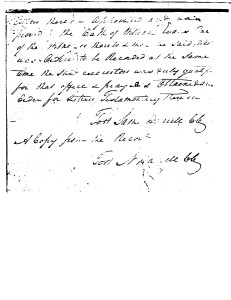 Note: corrections made to the make up of this family from the files of Michael Cotten and Jean Tarbell Cotten 3 Nov 2011.

NH Co Deed Bk 4, page 81 Thos. Cotten & his wife Mary of Northampton Co. to Wm. Ruffin of same. 1767. 300¬£ VA. 123 acres which grantors had purchased from Robert Cotten & his wife Absallah 27 Dec 1763; also 107 acres which was part of a tract which sd. Thomas Cotten received from the will of his father John Cotten; 227 acres which was part of a tract of 640 acres which had been a proprietary grant to sd. John Cotten 1 June 1668; the lands joining sd. Ruffin, Darson, Cotten. A cemetery on the plantation was not included in the sale. Thos. Cotten, Mary (x) Cotten. Wit: Bennett Hill, Joseph Dicken. Aug Ct 1767. Examined femme relinquished her right of dower. C/C Willie Jones

Could this Mary, his second wife be the half-sister of Patience Bridgers and daughter of Wm. Cotten and his wife Sarah Bridgers?