James A. Sparkman was one of the orphaned children of Mills Sparkman and wife Mildred Beeman (daughter of Abraham Beeman and Lucretia Eure, giving James a double Sparkman descent since Lucretia Eure was the daughter of Capt. Charles Eure and Mildred Sparkman), married December 29, 1832. (Although Mildred was born in 1799, she was still single at the time her father’s will was written in January, 1832.)
Mildred Beeman’s younger sisters Margaret and Martha both married Mill’s brother Dempsey Sparkman and moved to MS with others of Abraham Beeman’s sons.

James and Emma Sparkman and his brother Thomas J and his wife Mary Jane Sparkman were all charter members of the Eure Christian Church in August 1876.

Abraham Beeman and Lucretia [Cresey] Eure were married 29 Aug 1792 in Gates Co NC.
She was the daughter of Capt Charles Eure and Mildred Sparkman.
She died in her 80th year after 1850 census in Leake Co, Miss.
Abraham Beeman was probably the son of Israel Beeman who died about 1800 in Gates Co NC. Abraham Beeman, Esq departed this life 5 Feb 1832.

e-mail from Ann Do you have any information on Jethro Eure? He was born June 14, 1814 in Gate, NC and married Nancy Beeman, b. Sept. 03, 1811 in NC. Nancy’s father was Abraham Beeman and her mother was Lucretia T. Eure. Jethro and Nancy had 5 children between 1833 and 1847. They were born in NC (in or around Gates County) and moved south to Mississippi about 1849. I’ve also made connections to Sparksman through marriage.

Aug 1831 Ordered that Jethro Eure son of Ruth Eure be bound an apprentice to Dempsey Parker to learn the art of farming.

Lewis Sparkman first married the widow Elizabeth Hargrove Harrell May/Aug 1782.
[The widow Elizabeth Harrell who married Lewis Sparkman was a Hargrove and a brother to George Hargrove who, like William Reed Sparkman, also relocated to Trigg Co., KY. She was also possibly the brother of William Hargrove, she and George being the distributees from his estate. I only have noted one record from Gates Court records of this estate proceeding, wherein Lewis and Charles Eure posted the bond. November Court, 1783: George Hargrove came into Court and moved for administration of the Estate of William Hargrove deceased which was considered of & Granted thereupon it was Ordered that he give Security in the Sum of two Hundred pounds Specie at the same time. Lewis Sparkman & Charles Eure came into Court and offered themselves as Securitys who were approved of &c.] e-mail from Kendall Sparkman

February Court, 1825: The last Will and Testament of Lewis Sparkeman decd. was exhibited into
Court by John Sparkeman and Demsy Sparkman Executors therein appointed and was proved by the oath of Hillory H. Eure, a witness thereto and ordered to be recorded, at the same time the said Executors were duly qualified for that office &c. Recorded.

May Court, 1825: Tresey Sparkman widow of Lewis Sparkman decd. came into Court & openly
descented from her late husbands will Ordered that the descent be entered on record &c

Ordered that the Sheriff summon a Jury of lawful men and go on the premises and ____ there lay off and set apart the dower of Cresey Sparkman Widow of Lewis Sparkman decd. out of the lands which the said
Lewis Sparkman died seized and _____ agreeable to the Act of the General Assembly in such case made and _______. [NOTE: Abstract contains missing words.]

You will note that Lucretia makes no mention of granddaughter Elizabeth Eure in her will, and I assume she is a the daughter of a daughter of Elizabeth Hargrove Harrell.

[The “Cherry” Sparkman you found in the 1840 census is actually Charity Smith Sparkman, the widow of Willis Sparkman. Her age suggests that Willis was born prior to 1760 and, I believe, thus lends credence to Willis and Reuben being the orphaned sons of William Sparkman d. 1762. e-mail from Kendall Sparkman]

most of this family went to Texas and Miss. about 1849

On Nov 1806 DB7-247 Noah Smith of Pitt County gave to Capt. Charles Eure 122 acres with power of attorney from his mother Susanna Smith [of Pitt Co] and Levy Eure, Whitmell Eure & Lucrecy Beeman grandchildren of John Sparkman decd who in his will had bequeathed the land to his two daughters Mildred Eure and Susanna Smith. 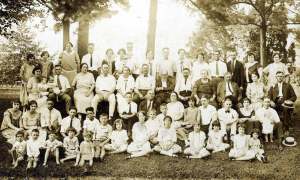 names of the people in the photo

This is probably more information than you want, but these family relationships can be traced through the following Onslow County records with respect to 400a of which John Sparkman was seized at his death:

Deed Bk 2 – P 50, Obed Williams, sheriff of Onslow, a judgement against Lewis Sparkman in favor of Creed Dudley. Sells a tract of land to Chaney Sparkman, 400 acres that was property of John Sparkman deceased, Oct 12, 1808.

Deed Bk 2, p 137 – Jan 16, 1805 – Woodhouse Ward bought of Anthony Kinnin and Christainy, his wife of Beaufort Co, NC, for $15.00 all their right, title and claim in all the lands which fell to us by the death of our 3 brothers; namely, Mills Sparkman, Jelty Sparkman, and William Sparkman, the said land having fallen to them by the death of their father, John Sparkman, and we the said Anthony and Christiany Kinnin now sell to Woodhouse Ward. Tests: John and Aliff Ward.

Deed Bk 5(4), p 155, Jan 9, 1815(1813) – Chaney Sparkman to Lewis Foy of Jones Co. for $525.00 sells Foy all land he holds as heir of John Sparkman deceased, and that which fell to him by death of 3 brothers; Mills, Jelty (Jolly), and William Sparkman; and also the rights of Lewis Sparkman which he purchased at sheriff’s sale. Land joins that of the old patent of Edward Marshborne of 640 acres near Solomon Ward’s cart road, Lary’s line to Adam Lutens old patent and line agreed upon between Isaac Jarrett and Lewis Foy, containing 400 acres. Tests: Isaac Jarrott, Enoch Foy, John Ward.

Deed Bk 7(6), p 134 – Dec. 1, 1816. John Gornto for 35(33) dollars paid by Joshua Foy deeds an undivided moiety of land granted from Chaney Sparkman to Lewis Foy which joins Edward Marshborn’s old patent of 640 acres on the south side of SW branch of New River at Lary ‘s and Adam Luten’s lines, Isaac Jarrott’s, which is land that came to my wife, Treasy, at death of her father, John Sparkman, deceased, containing 33 and 1/3rd acres. Tests:Morris Foy, James Foy, Sr.

Deed Bk 10, p 150 – Mar 19, 1819. John Erixon and wife, Susanna, sold for 40 dollars paid by Joshua Foy, an undivided tract of land being an parcel contained in a deed granted from Charney Sparkman to Lewis Foy joining Edward Marshborn’s patent of 640 acres on the south side of the south west branch of New River to Adam Luton’s line, containing 33 1/3rd acres, it being all our right in the land which fell to Susanna Sparkaman by the death of my father John Sparkman, and by the death of my brothers, Mills, Jetty, and William Sparkman. Tests: Asa Watson, C. Sparkman.

29 Apr. 1820. James Landers of Onslow Co. appoints Charney Sparkman as his attorney to sue and received from executor of Stephen Eure, dec. legacy left wife, Sarah Pettit (as was) in last will of said Eure. James Landers. Wit: Arch B. Higgs, Elizabeth Sparkman.

July 6, 1798. The estate of Mills Sparkman, son to John Sparkman, deceased, settled with his guardian Nathaniel Pettit by Jas. Foy and Geo. Shepard.

While John could have a been a son of John Sparkman d. ca. 1767, due to his economics among other considerations, I tend to believe that he was the son of Thomas Sparkman d. ca. 1789 and the older brother of Lewis Sparkman of Gates Co. e-mail fromKendall Sparkman