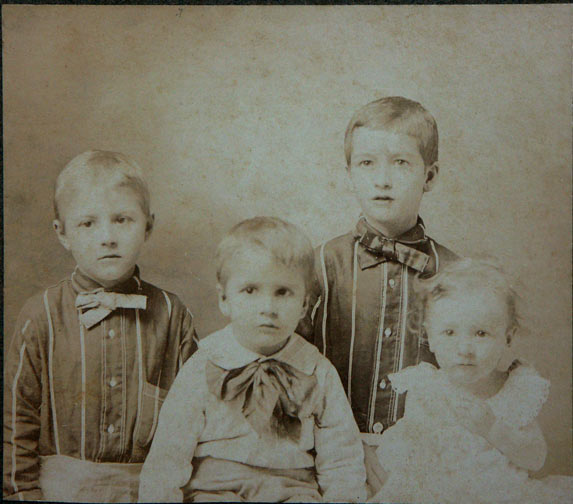 (lived in Hertford Co just over the line at Maple Lawn.) 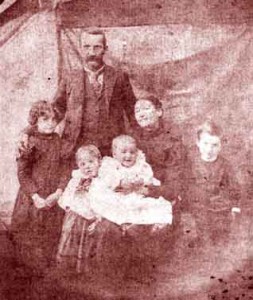 Arthur Cotten Moore and Johnnie Florentine Rayner were married 24 October 1886. They made their home with his parents at Maple Lawn.

Arthur Cotten Moore, son of John Wheeler Moore and his wife Ann James Ward, was born 28 July 1854. He received an appointment to West Point, NY. Despite his Great Uncle Junius Wheeler being the math professor there, Arthur failed his math exam and returned to the family farm and farmed the family land. (My sister Julia and I discovered his math book this spring with a bullet hole in it!)

He was an extremely well-read farmer. At night, he would read to the family by the oil lamp the Waverly Novels and Shakespeare’s Plays–all the books from his father’s library. He was interested in the latest ideas in agriculture and involved his son Raynor in the Corn Club now known as the first 4-H Club. Raynor won the award for the best record, thanks to his father’s insistence that he write down everything he did. 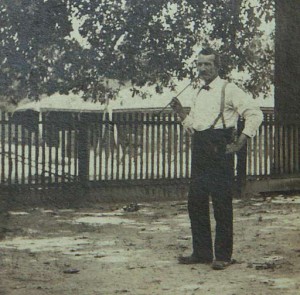 Raynor as a teen sometimes was called upon to remove his father from situations. Wearing his new metal-soled shoes, Arthur decided to attend the protracted meeting going on at the Baptist church in Powellsville. On the way, He visited with a friend who had shared some whiskey. Arriving late the only seat he saw was the chair behind the man preaching in the pulpit. Being Mr. Arthur Moore; he thought, in his daze, he should take it–Wrong! 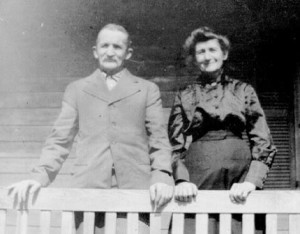 Years of over-indulgence rendered him an invalid for his last years. Arthur died 11 March 1926 of “pernicious anemia” [so stated Dr. J B Ruffin Sr.] His family buried him in the cemetery at the Jones’ Hole.

Johnnie Florentine Rayner, daughter of John Alexander Rayner and his wife “Molly” Mary Winifred Rayner, was born at the family home 14 December 1863. My father recalled that she was a very fine seamstress. She had stitched him the suit for which Uncle Marc gave the material. Also, there was the time the ax slipped when Raynor was chopping wood; they poured some of his dad’s liquor over the gaping wound in his leg, and then she stitched him up. “Better than any doctor!” Daddy would brag years later. She enjoyed fishing in the swamps with her children catching supper on their bamboo poles and lines. 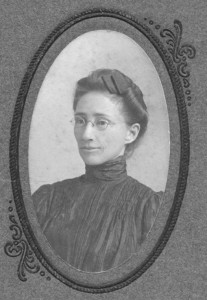 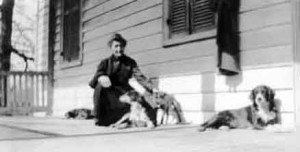 Johnnie Rayner Moore and her dogs

Aunt Julia told, “I had come home from nursing school and Mammy asked me to talk to my father about his drinking problem.”
“What problem?”
“Why he’s drunk as a fish right now, and I will prove it to you.”
With that, she went and put on one of Arthur’s suits and appeared at the front door. Arthur cordially greeted his guest who introduced himself as “Prof. MacNutty” who was an admirer of the family. He invited the “Prof.” into the parlor and carried on a conversation for about 30 minutes. His guest then took leave. Arthur never suspected anything fishy. “See!” Johnnie exclaimed to Julia, “I told you he was drunk!”

Exactly ten days after her husband’s death, Johnnie died – 21 March 1926 of pneumonia. Mother says Johnnie had worn herself to nothing looking after her husband.
Physically she was a tiny woman–size three shoe.

How Daddy got his first Trousers or “When Raynor wore dresses.” 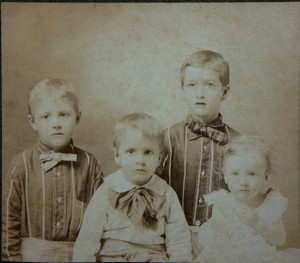 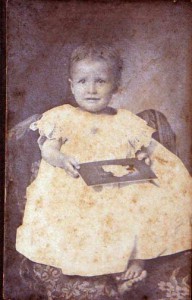 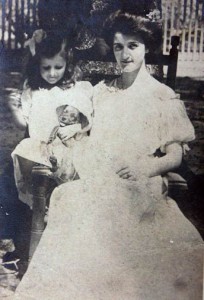 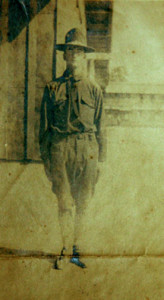 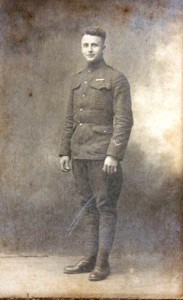 World War I: Raynor Moore on left at boot camp
Cotten Moore in wool uniform [Raynor was drafted by the local draft board – Cotton volunteered joining the marines.] 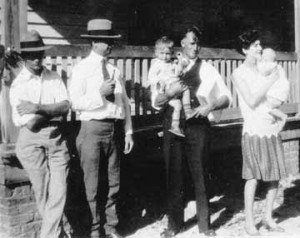 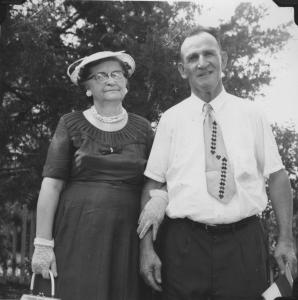 Other Children raised by Arthur and Johnnie:

While calling on her neighbor one day “Miss Annie” Ward Moore felt Rosa’s mother was mistreating Rosa. So Miss Annie said, “Rosa, you get your things, and you come right on home with me.” Rosa made her home with the Moore family for the next 25 years until she married Mr. Skinner.

2. Joe Moore, a mulatto, was born in 1900. Joe was the son of “Uncle” Peter Moore’s daughter Sadie and Julian Moore, This time it was Arthur who felt Joe’s mother’s family was picking on the boy. Arthur brought him to the” big house” to live with his sons who all slept in the building known as the office located at the right corner of the fenced yard.

On 24 June 1914 as Joe, Cotten, Jim, and Raynor were working in the fields down at “the old house,” a sudden storm came up. Joe and Cotten jumped into the wagon with their hoes on their shoulders; Jim and Raynor came running to catch them. “There was a sudden bolt of lightning, the mules bolted and ran off for home throwing Joe and Cotten out onto the ground. “When we arrived, they were both lying there dead still.” Raynor would tell us with tears in his eyes. “Jim ran to get Daddy. I jumped on Cotten and was able to bring him around. I turned to Joe. My Dad had gotten there by that time as he had rushed out to find us when the terrified team arrived at the barn alone.
‘No, Son,’ he said, ‘Look at Joe!’ And I looked and saw that Joe was beyond recall. the lightning had run down his body stripping the flesh from his bones.”