Elsa Weschler Koestler related that her father’s grandfather was named Charles Weschler of Austria, who never emigrated.
He was said to have had a grandfather Voschler born in 1732 and died in 1848 in Bavaria. This man had three wives.

Charles Weschler evidently was a trader whose family had lived in Armenia for a couple of generations.

In 1986 a reunion of the family Weschler was held in Leimersheim. Andre Weschler, genealogist from Strasbourg, in his speech to the 400 assembled from scattered points had this to say:
“Leimersheim was the cradle. . . .The oldest document mentioning the family Weschler dates from 1533, until the end of the 18th century the Weschlers did not go much further than a dozen kilometers from their birthplace. From 1830 onwards we begin to see a dispersion of our family in the villages along the Rhine, especially the left bank of the Rhine. A certain movement toward France can be noted from 1870 to 1910 . . . .
“Our name derives from the denomination of the gold diggers or rather the gold washers. In German ‘der Weschler’ the washer and his lady wife ‘die Weschlin’. Panning for gold in the sands of the Rhine was one way of balancing the family budget in those far off days. In 1830 six hundred gold searchers were working 50 locations between Bale and Mannheim. It’s pretty amazing to think that people used to pan for gold all those years ago, and now still to this day people still often venture out into unkept lands to prospect for gold, the only difference being I guess they use equipment that tends to be a little more modernized, such as some of these items available if you were to click here. Oh and the fact that gold prospectors of today tend to do it as a hobby, a lot changes through time. Continuing with the story of Weschler, these workings were stopped by the dykes enclosing the Rhine, constructed by the German Engineer Tulla. We still find however placenames referring to gold searchers at Leimersheim, and the last of the gold washers, Weschler by name are mentioned in 1825.
“I might add that we have no relation whatsoever with the surname Wexler who were money changers in the middle ages. All the Weschlers that you might meet around the world originate from Leimersheim. The only other surname which may have a relation is ‘Woeschler’ which was the French equivalent at the end of the 18th century in the town of Woerth (Palatinat).” 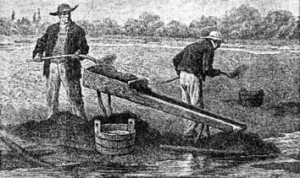 Panning for gold in the Rhine 19th century

from Article from Newspaper 24 Mai 1986 by Helmut Sittinger
Documentation of a name: gold hunter in the Rhine.
Gold in the Rhine first mentioned in 1400.
Weschler signifies gold hunter.
“….The material used by the paners was very rudimentary, it was in fact the same in the 19th century when the activity ceased as it was in 1582 when Herberer gave a description of it. ‘They fixed three rough planks on inclination and shoveled a quantity of silt onto them. After they took water from the river and rinsed the sand. The bigger and lighter grains of sand were washed away leaving the heavier gold-bearing sand in the crevices in the planks. They continued this operation until they had about one pound of sand which they brought back home. There, they lit a fire under an earthenware crucible containing some of the sand already one could see the little balls of gold taking form. They then added to this sand a little mercury so forming on amalgam, the gold losing its brilliance when put in contact with the mercury. These nuggets of amalgam were then collected and modeled into round hard balls. After these balls were put into a glass crucible and heated where upon the mercury evaporated leaving the brilliance of gold. It was pure gold, the gold of the Rhine.’ It seems however that their gains were very meager especially as the prince elector (Kurfursten) took a good part in taxes.”