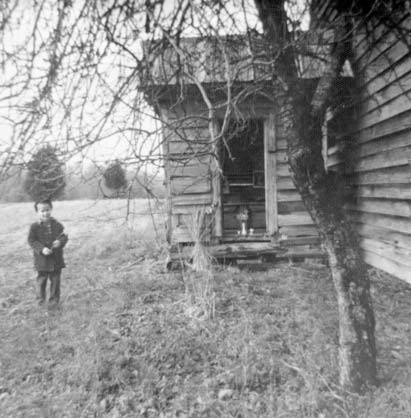 We of Maple Lawn called that little necessary building located out in the garden as “the library” or “the toilet.” Daddy was known to say Jack’s House.” Perhaps this epithet referred to it builder one John Wheeler Moore who had the little house fitted with double-sash windows on either side and also lathed and plastered its walls. In my childhood, it was well stocked with the old catalogs – Sears & Roebuck, Montgomery Ward. Old magazines were often found there as the family did love to read while they sat. But I can tell you it was most disconcerting to get to an exciting place in a story and find that the rest of the story had gone down the hole.

More often the family used covered enameled “buckets.” One sat in the closet beside the sitting room and others were in the upstairs bedrooms. The detail of emptying these “buckets” rotated among the older children. The mishaps on the stairs were legends. Later, Arthur and I dug for Mama a five by five and five-foot-deep pit in the chicken yard. Out between the pomegranate and crepe myrtle bushes in a spot that was part of the garden at an earlier time. Fitted with an old rusted-out “bucket,” it served for years as the daily depository for the contents of the buckets. 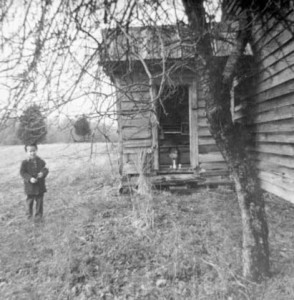 Ca 1970 -Here is that famous ca 1900 little house after it had been adopted as a play house many years after it cease its function as a toilet. Covers fashioned from cut-outs of the holes with the addition of a 2″ board for a handle & to keep the lid from falling through. In my youth huge fig bushes and a mulberry tree were in the picture plus an eight-foot wooden fence to protect the fig bushes from the north wind. Directly behind Michael, my nephew, was the chicken yards. One of the major hurricanes relieved us of all our chicken houses. The wind whipped around from the south and just lifted them up. The buildings were all- screened openings on the south side.

I was chatting by e-mail with Barbara Mulder, who grew up on a farm near Early’s Station in Hertford County.

Barbara – When our old home place started to fall in, I went there and took pictures of everything, even the toilet. Whenever Mama lost one of us little ones, she always imaged that we had either fallen into the out-house or down the well. I felt so sorry for her; she would wring her hands and cry “my young’un has fallen in the well or either down in the toilet.” But she always found us in the back room asleep. Mama, terrified for us little ones told us to go behind the barn. I can still go behind the barn or at the edge of the woods. I only hope I never get bitten by anything. 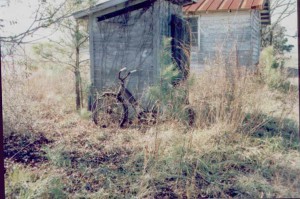 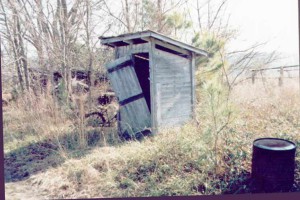 photos by Barbara Mulder of her family’s old toilet
appears to be one of the newer “sanitary toilets” that featured a deep pit under the seat.

Barbara – I think what you are doing with your web page is wonderful. You are documenting history, a way of life that is gone. I can tell you some fantastic stories of how my family lived. And as you know, there is a story behind every picture. Mama said the only place she could go to find some quiet time was to the field or tobacco bed. She knew that her eight children would not follow her there. We were not bad children, just noisy. Daddy kept his belt ready and did not mind using it.

Sally – Barbara, our toilet had three different sized holes, and was fitted with windows so you could read with ease while you were doing your business. Its walls lathed and plastered; It was originally at the end of a path in my grandparents garden. But Daddy had brought it closer to the house and re-installed it next to the smokehouse. It had no sanitary pit as my father was very fearful that one of the young’uns or an animal might fall in, but rather the building had a removable back, so the stuff could be removed and spread in the fields during the winter and then plowed in. Mama also made him close up the well and installed hand pumps so we children would be less likely to fall into the well. Our yard around the house they securely fenced both to keep the little ones and to keep OUT the stock wandering in the fields after the harvest of peanuts and corn. The gates they installed after a couple of scares in which a toddler had followed her father to the fields and then had sat down and playing with pine cones had fallen asleep. Mama found the baby by tracking her footprints in the sandy soil.
A hurricane flattened both the toilet and the smokehouse at our home “Maple Lawn” just a few years back.

Barbara – We were not as rich as you, we only had two holes. Talking about old time is fun. I can remember going across the road to my Uncle Robert’s house, and they had bathroom tissue in their toilet. We used Sears catalogs and newspaper if we lucky enough to be able to buy a newspaper. Do you remember how we used to take a piece of the paper and squeeze it in our hands to get it a little softer?

Sally -Yep! and, The clay coated pages were not one bit of good [for wiping].

Barbara – My cousin e-mailed me a poem about the “outhouse.” She never had to use a (toilet is what we called it) until she came to visit us. That was the only way of life we knew. They were the good old days. I probably did not go much because it was cold, hot or dark outside. Oh for the good ole days! AHHHHHH!

Little House out back
author unknown

‘Twas a place to sit and ponder
With your head bowed down low;
Knowing that you wouldn’t be there,
If you didn’t have to go.

Ours was a three-holer,
With a size for everyone.
You left there feeling better,
After your normal job was done.

You had to make these frequent trips
Whether snow, rain, sleet, or fog–
To the little house where you usually
Found the Sears-Roebuck catalog.