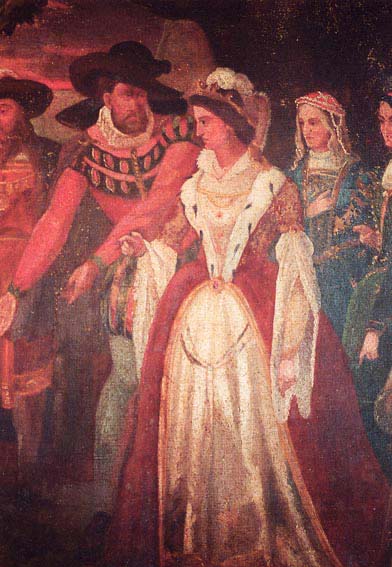 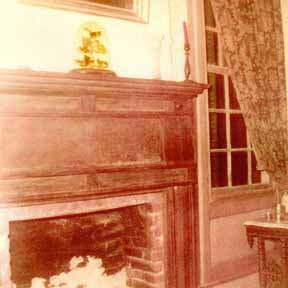 1956 The drapes hung for the wedding
of Ann Ward and John Wheeler Moore in 1853 were still in place. 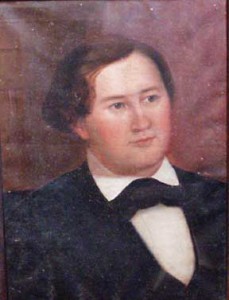 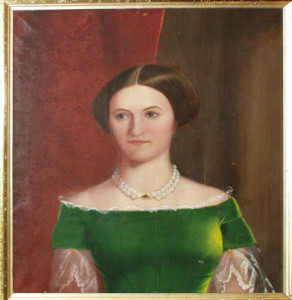 John, Arthur, and Ann Ward Moore 1856
[Yes, that’s a “mended” hole near Arthur’s eye — one of his younger brothers, mad with Arthur, went into the parlor and poked his picture with a reed]
These three portraits were all on one 6′ x 4′ Family portrait made to fit a wall in Ann and John’s beautiful white brick, three-story home “Anniesdale” in Murfreesboro.
Unfortunately, wall space was lacking at “Maple Lawn.” Cuts were made to form the three smaller portraits, but losing the baby girl, Aunt Bessie, that was on Anne’s lap. 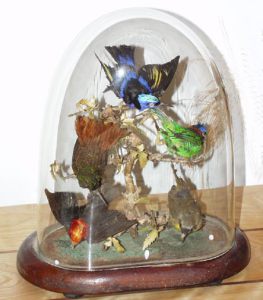 The “birds under glass” were a wedding gift from Uncle John Hill Wheeler, who at that time was the third U.S. Minister of Nicaragua. It was the only one of the glass domed “nature” to survive the house fire. Their mansion “Anniesdale” located next to Chowan Female Institute (now Chowan University) burned in1866.

The family then removed to Ann’s farm called Maple Lawn. 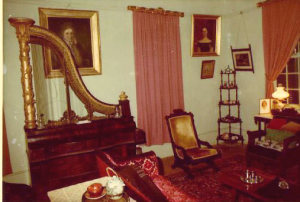 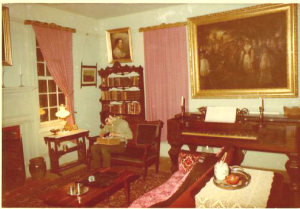 When I was growing up, I often conducted “tours” for visitors. Some of the uncommon items are pictured. “The Harp Piano” was made by Agustus Stern of Baltimore–family tradition says John W Moore swapped his riding horse for it. This piano was for his daughter Bessie. Mr. Stern only made two exactly like it. The other piano in the parlor was bought by J. W Moore at the Columbian Exposition for his daughter Julia. You are standing in front of John W Moore’s library of books that covered the whole wall as one walked through the door. The Couch is one that was at Mulberry Grove. The little table at far right is an ancient cherry tilt-top card table. At some point in its life, someone put a nail through it when it tilted in the middle of a card game. There was the survivor of a pair of huge hurricane globes, and the lovely twin marble-topped tables on either side of the fireplace. The Major’s collection of minerals– a sample of all found in North Carolina. The various diplomas and old land grants. And the family portraits and pictures. An ancient surveyor’s compass. Stone jars for storing fish and pickles in brine. Shoe forms and various “cording” tools.

There was also the field sword of Major John W Moore. He surrendered it at Greensboro where it’s blade was broken and then returned to him. My father’s souvenirs from World War I: his gas pack and mask, his helmet and also, one a German soldier wore — boys thought these were the very best things in the parlor. 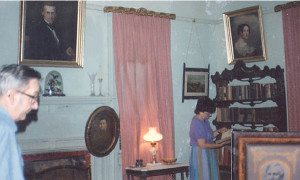 The large painting over the piano painted by the first instructor of art at Chowan College. Supposedly it is Sir Walter Raleigh spreading his cloak for Queen Elizabeth. Anne Ward was the model for the queen. 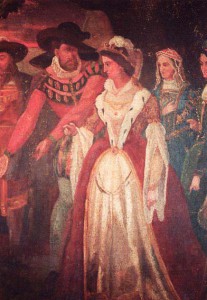 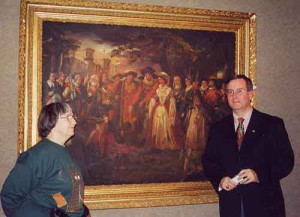 Painting was in special exhibit of Art Nov 2000
by the students and professors of Chowan College 1848-1901
Pictured with the painting, Sally Koestler and nephew, James E. Moore
photo by Cathy Spruill

The large painting “Sir Walter Raleigh Spreading His Cloak for Queen Elizabeth” done by one of the early art professors at Chowan Baptist Female Institute, the precursor of Chowan University.
Ann Ward Moore (1834-1901) posed for the figure of the queen. Various Murfreesboro citizens posed for the courtiers and the royal guard. Ann James Ward was Chowan’s first graduate in July 1853. Later that same year, she married John Wheeler Moore. This painting embodied the Moore family’s love of all things English and its devotion to the history of North Carolina fully. For generations, it hung in the parlor at Maple Lawn. Sold out of the family in the 1990’s the painting has changed hands several times in recent years. Chowan University now owns it.

The “little room above the parlor

This Mantle was part of the original house at Maple Lawn.

8 thoughts on “The Parlor of Maple Lawn”