1741 — This Josiah Perry, son of John Perry and his wife Sarah Walton, is said to have been born 19 Nov [I think most likely this was in Chowan County]

Bertie Ct. Records (Haun) Oct Ct 1760 The last will and Testament of John Perry Deced. was Eshibited into Court by James Perry One of the Exors thereof and Proved by the oath of Nathaniel Holley one of the sub. wit. thereto, and at the same time the said Exor. was Quallified. The inventory of the Goods etc of the Estate of John Perry deced was exhibited into Court by Oath of James Perry etc.

filed under Sarah Perry: Order for the division of the estate by Nicholas Perry, her admr. Oct 1761.

Dec 1761 Josiah Perry married Elizabeth Freeman, who was daughter of William Freeman of Chowan County and his wife Christain [thought to be an Outlaw].

Feb Ct 1775 Bertie Co – Josiah Perry, with Watkin Williams Wynn, Thos Ward and James Holly Jur. are appointed to lay off one acre of Timothy Walton’s land opposite Benjamin Brown who has asked leave to build a Water Grist Mill on Barbaque Swamp.

also – the petition of Timothy Walton praying leave to build a publick Water Grist Mill on Barbaque Swamp and that Josiah Perry, Joshua Freeman, Nathaniel Holly and Jesse Garet to lay off one acre of the property of John Ramsay the proprietor of the land on the opposite side of the swamp. John Ramsay summoned to appear at the next court.

Aug Ct 1775 Bertie Co – Petition of James Holly have leave to build a Mill on Barbaque Swamp and have a jury lay off one acre of the property of Josiah Perry for that purpose. ordered. that Samuel Rayer, James Wynn, Timothy Walton & John Rayner be appointed a jury to lay off another acre on the Land of James Holly for the same purpose and that Josiah be summoned to appear at the next court. 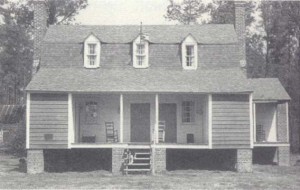 home built 1785 for Jacob Battle and his bride Penelope Langley Edwards
located near Rocky Mt vic. in Edgecombe Co, NC
“A Guide to the Historic Architecture of Eastern North Carolina”

Josiah and Amillicent Perry’s home was of style similar to the above.
the house was bull dozed by the latest owner.

“[Josiah Perry’s] land [was] in the Powellsville section of Bertie County . . . adjoining the lands of Timothy Walton. He also purchased from John Winborne the Liberty Hill Fishery on the Chowan River, which he devised in his will to his wife for life, and then to his son Freeman and daughter Amillicent.” B B Winborne
Note: Judge Winborne [and Major John W Moore] confused Josiah, the son of John Perry and Sarah Walton, with Josiah the son of Israel Perry who was a younger man and this Josiah’s first wife Elizabeth with Elizabeth Twine Perry daughter of John Twine who died in 1783 — at the time of Mr. Twine’s death his daughter Elizabeth was still living – this Josiash Perry’s wife Elizabeth had died about 1775/9. Josiah Perry, Esquire, was living in Paquotank County at the time of the 1790 Census.

I hereby revoke so much of the 12th item as relate to a Negro boy Andrew (which was given to Freeman Perry Children) it is my desire that my Executer and Executrix sell the said boy Andrew & the money arising there from to be at my wife Amilicent Perry’s disposal this annexed to making a part of my Last will & Testament made the 20th day of April 1920. Witness I have hereunto set my hand & append my seal this the 3rd day of June 1820 Josiah Perry ( very shakey signature)
Witness: Jas Ward Benj Hill

North Carolina, I Josiah Perry of Bertie County. Low in Health tho of a sound mind & Disposing memory do hereby annex this my Last Will & Testament dated the 20 day of April 1820 and make part of my last Will.
Item 1st I lend to my four Daughters (Viz) Celia Rayner, Penelope Sessoms, Frusanna Mercer, Milicent Simons the followingNegroes (Viz) (Tamar, Haywood, Pomp, Dick, George & Simon) that frusanna Mercer have two fifths of the above property after my wife Death (& Celia Rayner, Penelope Sessoms, & Milicent Simons one fifth Each) During their lives & after their Death I give the said Negroes to their children & their Heirs forever.
Item 2 I hereby Revoke so much of .(15th)…… Sexton as relates to a Certain Tract of land lying in Edgecombe County which I bought of Phillip Cosway? lying over Jerry Creek in the piney woods, which I give the whole of said land to my Daughter frusanna Mercer to her her heirs & assigns forever.
In witness whereof I have hereunto set my hand & affix my seal this the 19th day of June Anna Domni 1820.
Signed sealed & acknowledged Josiah Perry
in presents of Jas Ward Benj Hill

State of North Carolina Bertie County August Term 1820
Last will of Josiah Perry decd and also the codicils hereunto annexed was proven in open court by the oaths of Benj. Hill and James Ward the subscribing witnesses thereto & ordered to be recorded at the same time Milicent Perry & John Simons the Executors therein named Qualified as such Test. E. A. Rhodes. Recorded Book G page 80 transcribed from microfilm of the original will by Sally Koestler.

Will of Milicent Pery: In the name of god Amen
I Millicant Pery being of sound and perfect mind & memory, do this 18 day of October 1822 make and publish this my last will & testament in manner & form following Viz.
1st I give & bequeath unto my grand children Emily Sessoms, Elanson Sessoms, Pininih Sessoms, Harrell Sessoms, Selah Sessoms & Laviney Sessoms and all the children that my daughter Penelope Sessoms may hereafter have, the following propertyViz. Negroes Silas & Ben, four beds & furniture, half dozen Windsor chairs, two horses, thirteen head of cattle, twenty head of hogs, all of which I purchased of Nathan Sessoms and have issue remained in the said Nathan Sessoms posession; also two beds & furniture, 1 large pine chest, 1 walnut table, 1 wagon with two bodies, together with its gear as also 2 mules, to be equally divided between them at the death of their mother; but it is my will & desire, that their mother should have the use of the foregoing property during her natural life.
2nd I give & bequeath to my daughter Fruzy Mercer Negroes Jack & Silvy, 1 large Linen Chest, to be hers & her heirs forever.
3rd I give & bequeath to Millisant Simons, Negroes Toby & Cindu, 1 Bed & furniture, 1 pine chest, 1 walnut Desk, 1 Mahogany table, 1 Mahogany stand, 1 yoke of Oxen, cart & wheels & my riding horse & gig, 1/2 of my bofat furniture, 1/2 of my kitchen furniture, 1/3 of my cattle & sheep, 1/2 of my hens, 1/2 of my spinning wheels, and 1/2 of the brandy that may be found at my death to be hers & her heirs forever.
4th I give and bequeath to my grandchildren Laviny Catharine Simons, Elizabeth Millisant Simons, Mary Louise Simons, and all the children that my daughter Millisant Simons may hereafter have the following negroes Viz – Sabra, Bryant, Nicy, Casar & Violet, 2 beds & furniture to be equally divided between them as they may sensally arrive at age, to be theirs & their heirs forever
5th I give & bequeath unto my son Freeman Pery 1 bed & furniture.
6th It is my desire that all the property that may be found at my death which is not above disposed of may be sold and after paying all my just debts, the balance be divided Jeremiah Pery, son of James Pery decd and the children of Miles Rayner, that may survive me, that is to say Jeremiah Pery to have one third thereof & Miles Rayner’s children to have the remaining two thirds, thereof.
6th It is my Will & Desire that all the notes, or bonds, that may be found at my death against Freeman Perry and Nathan Sessoms, may give up to them to the said Freeman & Nathan grattis.
7th ly & lastly I hereby appoint my beloved Son in law John Simons, Executor of this my last will & testament, in witness whereof, I have hereunto set my hand & seal, the day and year above written.
Signed sealed published & declared, in the Presence of,
Isaac Perry Milisent Pery seal
Jas Ward

State of N Carolina, Bertie County Court: Nov Term 1823.
The last will and testament of Milicent Pery decd was proved in open court by the oath of James Ward, one of the subscribing witnesses there to — ordered that the same be recorded at the same time James Ward qualifies as Adm. to the will annexed E A Rhodes CC
transcribed from microfilm of the original will by Sally Koestler.

From William Grizzard will: By my daughter Celia Hunter Perry’s heirs, by my daughter
Sallie $1000.00,

I except the following named heirs who are indicated to my estate the amounts affixed to their names. Christopher Grizzard heirs $300.00. Mrs. Sallie Perry’s heirs $700.00 .

Hardy is my G.G.- grandfather and thank you for all the information. A side note my G- grandfather married a Cotton Brad Clark