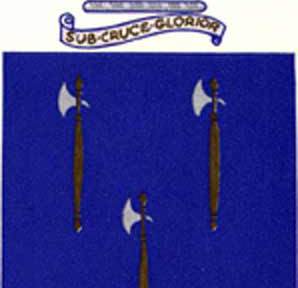 A Merchant in London, he Came to South Carolina ca 1680.
He received a land grant for 3000 acres 1680.
He made Landgrave in 1681, married Lady Rebecca Holland, who came to South Carolina in 1683, and she received grants of about 3,780 acres in 1696, 1704, 1707 and 1711. [Comp. of Am Gen.]
Daniel and his son Holland were “landgraves” near modern Summerville, South Carolina on the Ashley River (inland from Charles Town–now Charleston). Holland died childless in 1692. The name died with him, but the daughters married well

Children of Landgrave Daniel Axtell:
The Landgrave AXTELL, son of the regicide (will in London circa 1692), had several children, among them – Holland, hereditary Peer, d. nm. Anne. Elizabeth married to the Landgrave BLAKE, Rebecca, and Sybil.”
1. Holland Axtell died 1692 SC dsp
2. [Lady] Anne Axtell 1678 – Oct 1751 Charleston, SC
Inherited 1000 acres from her mother Rebecca [1720] and named the plantation Mount Boone.
She and Joseph are buried there although her marker is gone.
Married 1st John Alexander 1670
Married 1700 Joseph Boone 1678 London England – 24 Feb 1734 Charlestown SC
He was a Son of Thomas Boone and wife Sarah Finch of London and South Carolina. Joseph was an Indian Interpreter for the Colony, and serves as Agent to the Crown, traveling back to England several times before his death, about 1734.
He leaves extensive records in Carolina and England, and a will in Charleston.
Lady Ann BOONE’s will (daughter of Landgrave Daniel AXTELL), So. Car. Probate Office, W. B. of 1751, Hume’s England,
3. Elizabeth Axtell
Married 1698 Landgrave Joseph Blake
a. Gov. Joseph Blake, an English Admiral from Cromwell’s time.
Married 1701 Francis Turgis
4. Rebecca Axtell ca 1660 London – 21 Dec 1749
married John Moore ca 1658 – 1732 Philadelphia PA
5. Sybil Axtell
6. Daniel Axtell died at sea 13 Dec 1680
7. Mary Axtell

Governor of Kilkenny under the Protectorate: 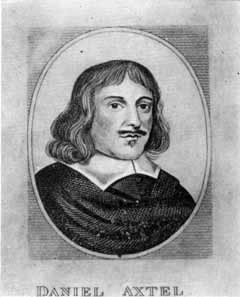 From a speech 1952 by Silas B Axtell
Lieut.-Col. DaVery early in his life seems to have become convinced of the righteousness of the Parliamentary Cause. He joined Cromwell’s insurrectionary army in 1643 and rose by merit and hard experience of many battles to the rank of lieutenant-colonel. He was junior in command of Colonel Thomas Pride in the action famous as “Pride’s Purge.” One hundred royalist members of Parliament, who had refused to concur in majority rule, were expelled from the House of Commons. Subsequently Colonel Axtell–as we all know–commanded the Parliamentary Guard at King Charles’ capital trial in Westminster Hall. Colonel Daniel Axtell was then 27 years old. For the next decade, he was constantly close to the Protector, Oliver Cromwell. Also The greatest of poets, John Milton; John Bunyan, of “Pilgrim’s Progress”; and all the other champions of the Puritan Cause. All this time, Prince Rupert, the dead king’s nephew, from his base on the continent, was harassing Cromwell’s Army. Colonel Axtell combatted these raids, and, northwards, subdued forays of the recalcitrant Royalist Scots. He accompanied Cromwell on several Irish expeditions and was Governor of the Province of Kilkenny. He retired then, for a while, from the army, and went home for a quiet life in Berkhamstead. ‘There he might have remained in safety had not his inflexible principles prompted him to volunteer to fight the return of the Royal Stuarts to the last ditch. He rushed to join General Lambert in the last hopeless battle, which was on Easter Sunday, 1660, at Daventry. Vastly outnumbered, the Republican Army had no chance. The conviction and execution of Colonel Daniel Axtell inevitably followed.
http://www.axtellfamily.org/axgenea/axsilasb.html

Daniel Axtell was Governor of Kilkenny under the Protectorate. He was
an active participant in Pride’s Purge leading to the execution of Charles I. He was excepted from the Bill of Amnesty in July 1660, and the pardons granted the following August.
He was arraigned at the Old Bailey,
— charged with commanding the soldiers at the High Court of Justice,
— threatening to shoot Lady Fairfax for interrupting the proceedings,
— and personal insults to the King.
To the first, he pleads the order of the Commander-in-Chief,
to the second, the exigencies of the occasion,
the third, he utterly denied. [his trial see ]
The sentence for treason is fully carried out [19 Oct 1660], and his head sat on the further end of Westminster Hall. (Ludloe’s Memoirs, State Trials). 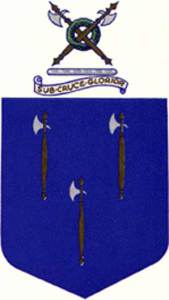 Coat of Arms of Daniel Axtell

e-mail from David Arathoon -davidarathoonstudio ( at sign here ) sympatico.ca
THOMAS TAYLOR; b c 1631; went to Ireland 1653 with his friend and college companion Sir William Petty (see LANSDOWNE, M), with whom he undertook the cartographic project known as the Down Survey (although the maps were published in Sir William’s name alone); sold his English property and bought 1660 land in Ireland, including Kells, Co Meath; Dep Receiver-Gen 1669 – 70, V-Treasurer and Treasurer-at-War; m 1658 Anne (d 4 June 1687), dau of William Axtell, of Berkhamsted, Herts, and d 1 Aug 1682, having had, with two other sons (d young), and a dau (Anne, m 1686 Sir Nicholas Acheson, 4th Bt; see GOSFORD, E):

e-mail from Grace:
Mary, the widow of Thomas, married 16 June 1646 John Maynard in Sudbury.
Also, she was NOT Mary, daughter of Dr. Comfort Starr.
Mary Starr married John Maynard of Duxbury, Plymouth Colony, on 16 May 1640 in Duxbury. She died about 1658, or at least just before the will of her father, Dr. Comfort Starr in 1659. To my knowledge this Maynard family never left the Plymouth Colony area.
Thomas and Mary (_____) Axtell had their second child, Henry, christened in St. Peter’s Church, Berkhamsted, Hertfordshire, England on 15 October 1641. Shortly after this, Thomas & Mary sailed from England, and settled in Sudbury.
There is a possibility – totally unproven that Mary may have been the daughter of Edmund Rice who was also from Berkhamsted. This Mary is mentioned in the 1672/73 estate of her second husband John Maynard.
Savage details FOUR John Maynard’s all in New England very early. Early researchers tried to make them all one, but they weren’t!
England area: Today the name of the town is spelled Berkhamsted, in ancient records it is Berkhampstead. Little Berkhamsted is a totally different town, and Great Berkhamsted is the name of the parish in Berkhamsted. Grace Schmitt
There are some spectacular photographs of St. Peter’s Church on the web at http://stpetersberkhamsted.org.uk/ then click on images of St Peter

The earliest the name had been found was 1535 – John Axstyl’s name found in a conveyance of property in Hertfordshire.
John Axtell, son of John Axtell was bapt. 1539. and William, son of John was bapt 14 Nov 1541.

from a speech 1952 by Silas B Axtell
“Within a year from that date [1534] we come upon the record of the action of a certain Johannes Axstyl, of Gatesden, Berkhamstead, Herts. John Axstyl was a Roman Catholic monk of the Order of Augustinians, Father Martin Luther had been a monk; of the Augustinian Order in Germany. The spiritual connection seems obvious. Anyhow, in 1535, John Axstyl was no longer a Roman Catholic or an Augustinian. In that year his signature appears upon a document which conveyed the Gatesden monastery to the English king. This ancestral Axtell, Protestant now, presently married, and in St. Peter’s Church, Berkhamstead, Herts., we see today the baptismal records of John, son of John Axtell (as he now signed himself) in the year 1539; and of William, son of John Axtell, in 1541, forbears of Daniel (Reg.) and his brother Thomas who settled here in Sudbury.”
Transcriber’s Note: It seems doubtful that Johannes Axstyl was the grandfather of Thomas Axtell of Sudbury as presented here. Johannes signed a deed in 1535 and Thomas was christened in 1619. Perhaps Johannes was the great-grandfather of Thomas. http://www.axtellfamily.org/axgenea/axsilasb.html