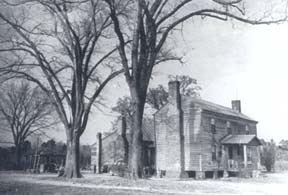 John Vann and Nancy Cross were married 30th day of March in the year of our lord 1806.

John Vann was born 15 December 1768 son of Jesse Vann (ca 1746 – 1815) and Ann Arline, who had first married a Peterson.
John Vann moved to Hertford County about 1800.
This family originally was in the part of Chowan County, that became Gates County in 1779.

Nancy Cross was born 28 May 1785 in Gates County the daughter of Cyprian Cross and Christian Riddick.
Nancy Vann, wife of John Vann departed this life July the 28th, 1846 about 7 o’clock in the morning being 61 years two months and ten days of age.

“In his last years John spent much of his time on the long porch of his home reading a large and unhandy Bible. If drowsiness overtook him in his reading the Bible became his pillow and a long narrow bench his bed.
While walking in his garden he was stricken, he was carried to the house.
. .brandy was offered him and even urged upon him but his reply was:
“I never drank in life, why should I in death.”
Two days later he was buried by Nancy in his garden.”

John Vann was chairman of the old County Court of Hertford County from 1820 until his death in November 1850.
He represented Hertford County in the House of Commons 1823, 24, 25. State Senator 1833-35.
He was a lifelong Democrat and a Baptist.

Louise Vann Boone wrote in 1930 of her great-grandfather: “Of great physical strength, a little learning and… less culture but with habits formed.
The son of a drinking man, in those days of regular drinking, he never drank, he was honest. He had a quick temper and a reputation for justice and fair play. He was active and fearless, a typical pioneer. Here on this tract of virgin timber, he felled trees of amazing size to the present generation, cypresses 8-10 ft and pines 4-6 ft. in diameter, built a home, cleared lands and began raising corn, peas, flax, and hogs. That home like many of that day was built over a cellar with a long porch running the length of the house with dining room and kitchen at the farther end.
Unfortunately, this house was torn down in the 1850s and another much less interesting house was built of the old timbers.
But here, until quite recently were preserved the tools, utensils, and devices that were used to make the farmhouse of 100 years ago an entity.

“During those days of clearing his lands John, while in the woods alone, shot and he supposedly killed a fallen deer. He dropped his gun to get his knife but before he could get it the deer, a young buck was up and coming toward him.
He managed to grab the deer by the antlers and hold his head but he was powerless in warding off the kicks of the deer’s sharp hooves.
A few feet away he saw a lightwood knot.
By great strength, he worked the deer toward this knot and with tremendous effort grasped it and with repeated blows succeeded in killing the deer, but his clothes were in ribbons from the sharp hooves and he carried on his chest the scars of that battle all of his life.

“In 1806 he married Nancy Cross of Gates County.
She was very small and very pretty with curly black hair and eyes, quiet and gentle in manner and speech, with a sweet and even-tempered disposition.
This giant of a man 6 ft 2 in of strength and muscle, with his blustering ways and quick temper, could be reduced to peace and quiet by the tiny Nancy putting her hand on his arm and quietly saying, “Now John, I wouldn’t do that.”

“The 1810 census shows John Vann owning 8 slaves. He never sold a slave, was kind and just to them. At his death, his estate has 39 grown and 4 children listed as his slaves. He once refused the offer of Mt. Gallant Fishery and timberlands in exchange for a negro girl who was waiting on the table at the time the owner of the fishery was at his home.
The loyalty and devotion to their master are amusingly shown in the story of Easter, a young negro girl who acted as nurse.
She with some of the children were visiting at Riddick Cross’s, a neighbor’s.
While passing his cornfield she saw several stalks of young corn growing quite tall. Easter stopped suddenly and in an indignant voice said, “look at dat corn, what business Mis’r Riddick got having corn taller than Marster,”
and Easter immediately went over the fence and pulled up the offending corn.

“John never joined a church until somewhat late in life,
then he became an active member of Meherrin Baptist Church where Nancy had long been a faithful member.
Though not a Christian he was a staunch Baptist always.
One Sunday, John asked Nancy if she would like to go over to Union, about 5 miles away, to the Methodist Church, it had just been repaired and this was to be the first service.
Nancy somewhat puzzled, but pleased, said “Yes,” so they went.
On reaching the church John strode boldly to the front seat and enjoyed the service. At the close of the service the usual visiting was engaged in until Nancy and John got in the gig and started for home.
On the way home, John confessed, “Nancy, I heard old man _____ said, while working on the church, the first Baptist that puts his foot in that church he was going to lick, I thought I would like to be the first!

“Once in Raleigh, perhaps at a session of the legislature and after he was more than 50 years old, he was seated at the table eating, when the man across the table called him a liar! John thought hard and fast, no man had ever called him that and gotten by with it, and he could not allow it this late in life, but how to get to the man, he couldn’t reach across the table–but before the others present realized what had happened John jumped over the table and the gentleman was repenting of the name he had just given the gentleman from Hertford.

“John Vann was practical, and his advise was much sought and usually followed on any subject he gave it on. He once broke up a horse race because after seeing the two participating horses he advised one man not to put money on the local horse. 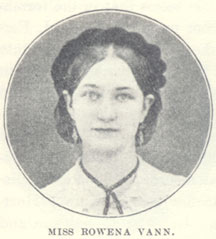 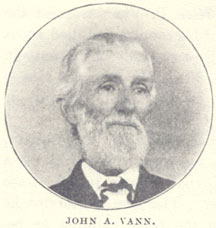