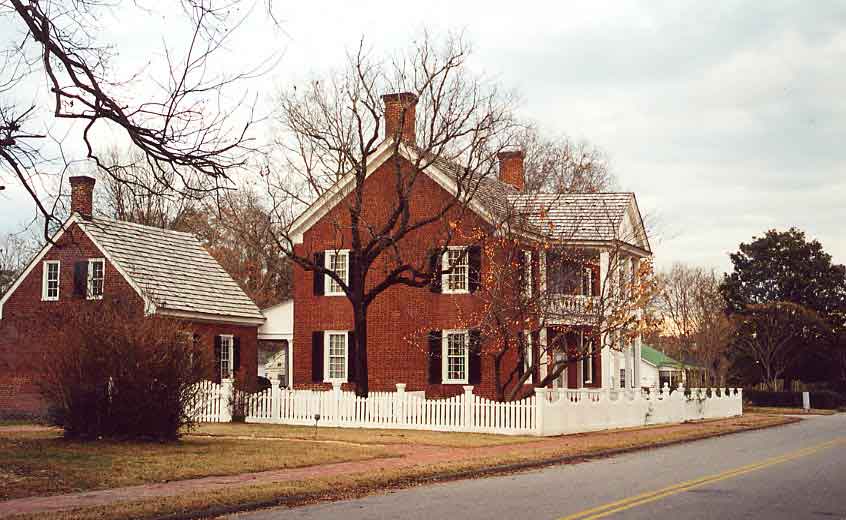 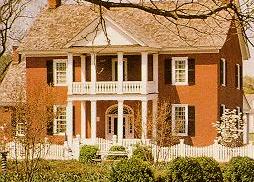 Home of John Wheeler in Murfreesboro, NC
as restored by the Murfreesboro Historical Society 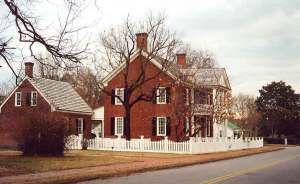 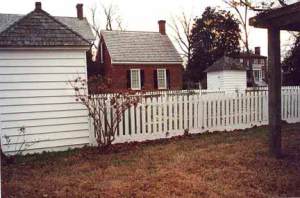 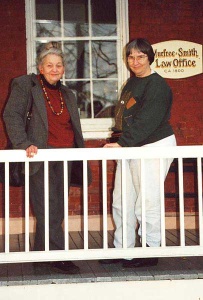 Nov 29, 2000, Sally Koestler and sister Julia Lawrence at the house
where their great-great-grandmother grew up in Murfreesboro, NC.
Photos by Cathy Spruill 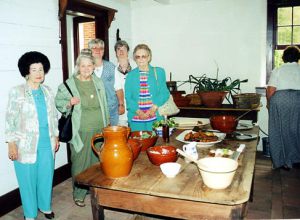 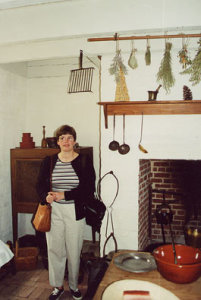 23 June 1771, John Wheeler, son of Dr. John Wheeler, surgeon, and his wife Elizabeth Longworth, was born near Elizabethtown (or Newark) in Essex County, NJ.
His family, who were Loyalists, were forced to move to Long Island 1777 and later in 1786 moved to St. John, New Brunswick, Canada.
In 1789 at age 18, John was working with his uncle David Longworth, merchant and printseller in New York City.
[He was John’s mother’s half-brother.]
Zedekiah Stone [1710 Mass – 1796 NC], merchant of Bertie County, NC persuaded John Wheeler to come south to assist him after his son David went into politics.
On 1 January 1796 John Wheeler married 1st Maria Elizabeth Jordan of Bertie County NC (7 Nov 1776 – 14 Oct 1810) daughter of William Jordan and his wife, Mary Hill.
After Mr. Stone died in 1796,
John Wheeler moved his base of operation to Murfreesboro, NC.
Windsor, Nov. 1st, 1796 –
This notice appeared in a newspaper of the time – Walter Hubbell and Co. inform the public that they have taken into partnership John Wheeler at Murfreesborough, where they propose carrying on their business under the firm of Hubbell, Wheeler and Co.
14 Oct 1810 – his wife Maria Elizabeth Jordan Wheeler died.
11 April 1811 John Wheeler and Sarah (Sallie) Ford Wood were married.
Sarah (Sallie) Ford Wood, daughter of James Wood and his wife Christian Freeman, was born 4 Oct 1788 in Bertie County, NC.
John and Sallie Wheeler made their home in Murfreesboro, Hertford County, NC where John Wheeler was a merchant–had a general store.
Sallie Wood Wheeler died 19 Oct 1814.
On 9 Sept 1816 he married 3rd Sarah I. Clifton of Northampton County, NC (9 Dec 1795-13 July 1833.) [This Sarah was a first cousin to Sallie Wood.]
He was postmaster of Murfreesboro, NC at the time of his death.
His son says he was a consistent member of the Baptist Church (Meherrin first known as Parker’s) for more than forty years.
John Wheeler died 7 Aug 1832 in Murfreesboro, NC.
His widow, Sarah Clifton Wheeler died 15th of July 1833.

Children of John Wheeler and Sarah I Clifton:

Edenton Paper: Walter Hubbell and Co. Inform the public that they have taken into partnership John Wheeler at Murfreesborough, where they propose carrying on their business under the firm of Hubbell, Wheeler and Co. Windsor, Nov 1st, 1796.

From the papers of that day, the following is copied:–
“Died, on Tuesday, the 7th of August 1832, at his residence in the town of Murfreesboro’, John Wheeler Esq., Postmaster of said place, in the 62d year of his age.
“He was one of the earliest inhabitants of the village in which he died. He had seen it grow up, from one or two scattering houses to the appearance that it now presents. In all his dealings with humankind, he was distinguished for his integrity of character and honesty of purpose. As a citizen he was faithful to every trust committed to his care; as a Christian he was a humble and devout member of the Baptist church for above thirty years; as a father he was kind and indulgent to his numerous family, and as a husband he was always affectionate. In all his relations to society he sustained an unblemished reputation; he lived respected by all who knew him and died deeply mourned by a large circle of friends and acquaintances. During his long, severe, and fatal illness, he manifested the utmost patience and submission to the decrees of an all-wise Providence. He retained his faculties to the last moment. When the hand of death pressed upon him, he was conscious of the touch and did not shrink from it. He embraced his family who was mourning around him and composedly bid them ‘farewell.’ He said ‘he felt that he was dying; that it was not so hard to die as he had thought; he was not afraid to die, that he knew he was going to eternal rest.’ . . . “John Hill Wheeler’s, Historical Sketches of North Carolina.”

Will of John Wheeler Hertford Co NC 1832
In the name of God Amen I John Wheeler Merchant of the town of Murfreesboro State of North Carolina being of sound mind & memory (blessed be God for the same) do make & ordain this to be my Last Will & Testament.
Item 1st I give unto my wife Sarah Wheeler all the Negroes & their increase I received by my marriage with her except my Man Will viz Dinah, Jinny, L Henry. Grace & Laura. I also give her Henry the husband of Jinny & Molly Known by the name of Molly Morgan & one thousand dollars in cash to purchase her furniture & such . .. as she may need she may. … ..from my estate . .. ..may need which must be fairly valued or appraised by persons to be chosen by her & my executors and she then may take the articles at three-fourths the valuation asessed which amount is to be deducted from her legacy of one Thousand dollars if she prefers the articles I also give her the sum of Five hundred dollars for her years provision which I intend to be instead of the years provisions which she might be by law be entitled in case I made no provision for her by Will. I also loan her the house in which she now lives for & during the term of her natural life also the lot or lot attached commencing at a point opposite the brick House now belonging I Believe to John A Anderson formerly to Jas Morgan thence down in a north course following the line between Lewis M Cowper & myself until it reaches the river at a point opposite the same place thence down the margin of the river until meet the gully or revine which separates the present lane from the field or land which I now rent to Patrick Brown Esqr then up the said gully or revine untill you come to my land gate on the main street of the town from thence Westwardly untill you meet the first point stated from. Together with the stables, corn crib &c which may be on the lot or Tract of Land This I give her in lieu of the dower by which by law she is entitled.
Item 2nd I give and bequeath unto my son John H Wheeler the Land for which I give him a deed for at the period when he arrived at the age of twenty-one situated near Murfreesboro on the Princeton Road bounded by the land of Jas Banks Isaac Pipkin & others containing about 250 acres more or less which profits he has had & still retains the possession also the fee simple in the House & Lot now occupied by Mrs Gordon as a Tavern in the town of Murfreesboro also the sum of three hundred dollars to him be paid for such legal services as he may render in managing my Estate to him & his heirs forever.
Item 3rd I do hereby confirm unto my Son Samuel Jordan Wheeler now a medical student in Philadelphia the deed of Gift made unto him by me giving unto him the sum of Five Thousand dollars deducting what amount he has already received as will appear by examination of my book to which I refer my Executor. to him and his heirs forever.
Item 4th I give unto my daughter Sarah Clifton Wheeler the Piano Forte which I now own deducting the sum of Two Hundred& fifty dollars for the same from the portion which may come to her from by Estate to her & her heirs forever.
Item 5th The rest of my Estate both real & personal I leave to be divided equally between my Daughter Julia Monroe Moore & my children by my present wife Sarah share & share alike to them & their Heirs forever.
Item. I give unto my Grand Daughter Eliza Clifton the sum of one dollar to her & her Heirs forever. It is however my intention that the portion which she may receive from her father’s estate (that left by Jonas Clifton dec) shall be equal to the portion which any one of my children by my present wife is to receive from my Estate . . . . . . . Item 7th It is my will that my Executors execute a deed for the house & lot wherein Ephraim Wheeler died to Henry Waring of New York which house is situated in the town of Murfreesboro near James Wills & Lot on Williams street I believe so called. . . . . . . . . . . .
Item 8th It is my will that my executors execute a deed unto James Banks–for the house & lot known as the academy . . . . ..
Item 9th It is my will that my Executors manage my Extate of every kind in such manner as may promote the interest of my Heirs. . . …
Item 10th I do hereby appoint my friend Jas Worrell of Maney Neck Dr Godwin C Moore and John H Wheeler as executors of this my last will & Testament . . . . .In witness whereof I the said John Wheeler have to this my Last Will & Testament .. hand and seal this the thirteenth day of July one thousand eight hundred & thirty two.
John Wheeler
Witness: John W Southall

Will of Sarah Wheeler 1833
In the name of God Amen I Sarah Wheeler of the Town of Murfreesboro County of Hertford State of North Carolina being of sound mind and memory (blessed be God for the same) do make and ordain this my last Will & Testament.
First I give unto my beloved Daughter Anna Slaughter Wheeler the sum of Two Hundred dollars in Cash to be paid out of my Estate. Secondly I give to my beloved son Junius Wheeler Two Hundred dollars in Cash to be in Like Manner.
I also give the children named above one Bureau Bed & Furniture each. I also lend the Two above named children negro woman Molly called Molly Morgan until the 1st of June 1841; I also wish she the said Molly shall be kept in the family as long as she shall live. I desire for my man Harry & his wife Jinny to remain together and not to be separated.
Thirdly I Give unto my beloved daughter Sarah C Wheeler one carved Mahogany bedstead with bed and bedding and her choice of a set of Bed Curtains also my new Black Cloak.
Fourthly I Give unto Mrs. Julia M Moore wife of Doct. G C Moore a curled Maple Bedstead with Bed & Bedding and a set of Bed Curtains.
Fifthly I give unto my beloved Brother William Cheatham now in the state of Alabama Thirty Dollars Cash to be paid out of my Estate.
Sixthly I now appoint Dr. G C Moore the Executor of this my last will– signed and sealed in the presence of witnesses this the 11th day of July 1833. Sarah Wheeler Seal
Witnesses: Geo M Mullen, Sam. W Muller, Sam. J Wheeler
State of North Carolina Court of Pleas & Quarter Sessions –Hertford County August Term 1833 This last will & Testament of Sarah Wheeler dec. was exhibited in open Court of Probate & the same Proved by the oath of Samuel J Wheeler one of the subscribing witnesses to it & ordered to be recorded. At the same time Godwin C Moore, the executor therein appointed was duly qualified as such & prayed & obtained an order for letters Testamentary thereon
Test L M Cowper, clerk 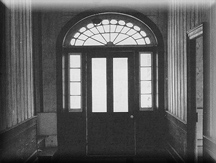