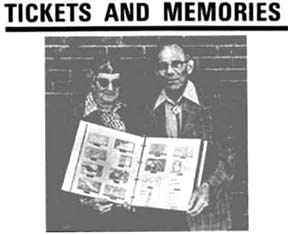 Elsa and Mel Koestler with their prized collection of Cornell game tickets.

1978— by Dave Wohlhueter. Melvin J. “Mel” Koestler, Cornell ’28, Cornell Law ’30, is one of Cornell’s most loyal fans and he has the ticket stubs to prove it–some 53 plus years of stubs to be exact.
Mel’s prize collection contains stubs from 346 games he has attended starting with the Penn-Cornell Thanksgiving Day game of November 26, 1925, through last week’s Columbia game–a grand total of 368 games and over 1000 hours of Big Red football covering 53 years. And then there are 22 games from the early years for which no tickets exist.
Mel does not have the ticket to the first Cornell game he ever attended–in 1923 against Columbia at the New York Polo Grounds, which his father took him to a year and a half before he entered Cornell. The Red, sparked by George Pfann, won it, 35-0.
The Koestler collection includes 53 Penn-Cornell games, and unbroken streak, 52 of which have also been attended by Mel’s spouse, Elsa, whom he met in January 1925, two weeks before he entered Cornell as a mid-year freshman. Elsa is a 1931 Wellesley College grad, but a Cornellian by osmosis. The next largest number of tickets in the collection is Cornell-Columbia (47), followed by Princeton (41) and Dartmouth (39).
The Koestlers consider themselves to be among the very first tailgaters, if not the actual originators of this football tradition. Way back in the 1920’s, while going from north Jersey to Franklin Field for the Penn-Cornell game, lunch was eaten picnic-style along Roosevelt Boulevard in Philadelphia. But in 1929, the Koestlers were late and because of the crush near the stadium, one member of the party missed the kickoff, a never-to-be-repeated occurrence in 53 years of uninterrupted Penn-Cornell games.
Beginning the very next year, in 1930, the picnic lunch was eaten in the Franklin Field parking lot. Then in 1932, the practice was instituted at Princeton, followed by Yale in 1936, in a lot now long since preempted for Yalies and their fancier fare, and now no longer available to mere Cornellians.
The Koestlers are hardy as well as loyal. During the past 55 years, weather has never held them back from attending the games. Their memories include a hurricane at Yale, snow so deep at Schoellkopf that the Ithaca fire department was called upon to clear the field and a flood on Thanksgiving Day when roads to and from Philly were nearly deserted (as were the stands) and pots and pans had been left at strategic points at home to collect the water that was leaking in. On numerous other occasions, roads, were icy or snow covered, but they were always safely negotiated, an important corollary to the years of football attendance.
Among the memorable games that the Koestlers have seen was the 1926 Dartmouth game, which Cornell won 24-23, after trailing 23-7 heading into the fourth quarter. Afterwards, Cornell became the first college to tear down its own goal posts.
In 1938, the Koestlers watched Cornell beat Dartmouth 14-7, in a superb game for the then unofficial Ivy League championship, and then saw the Red battle Penn to a scoreless tie on an ice-covered field.
Also to be remembered is the 1948 Dartmouth game, which Cornell won 27-26, and the unbelievable victory over Michigan at Schoelfopf in 1951, won by Cornell 20-7. The Koestlers did not see the Fifth Down game against Dartmouth in 1939, since it was before they began their long treks to Hanover.
Two other favorites were the 1959 Harvard game in Cambridge, which Cornell pulled out by a 20-16 score after half the Harvard rooters had left for home, and the 1947 Princeton game when Lynn Dorsett surprised a favored Princeton team at Palmer Stadium with a 10×10 passing performance that paced Cornell to a 28-21 victory.
Those ticket stubs are more than a collection of old paper. They represent good times and nostalgia for the Koestlers and a never diminishing love for Cornell.

ABOUT THE AUTHOR
Dave Wohlhueter has been the sports information director at Cornell since July 1977. Previous to that he was the SID at Bucknell for 10 years and at Ithaca College for two.