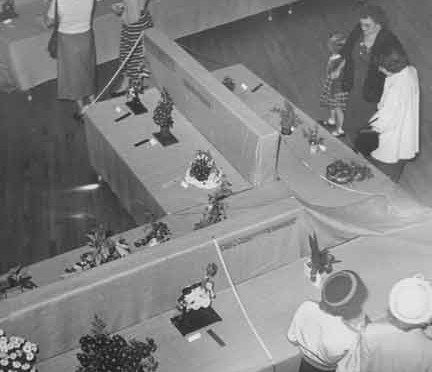 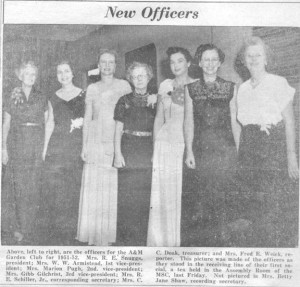 Note: should read right to left as that is the way they are standing.

Oct – TGC Fall Meeting at Fort Worth – Mrs. Al B Nelson of the A&M Club and Mrs H L Morrison from the Bryan Garden Club, as two of the top fifteen designers in the state invited to make arrangements, were given special recognition at the dinner and asked to tell about the materials used in their displays. Mrs Nelson used in her line arrangement in a dark brown bottle, specimens of dried garlic, magnolia leaves, phlox heads and china berries. Also attending from the A&M club were Mrs R E Snuggs, pres and official delegate; and Mrs C B Campbell, who gave the invocation for the formal dinner. From the Bryan Club were Mrs. Allister Waldrop, pres, Mrs John Seely Caldwell, and Mrs Norman J Dansby.

– In May Mrs W W Armistead was installed; but by September Mrs D W Williams is president.

– Miss Carolyn Landiss chosen to represent A&M Garden Club as its duchess at the Cotton Pageant.

Through the recent efforts of Brazos Beautiful (Organization) the Texas Legislature has designated this community the “Crepe Myrtle Capitol of Texas” making these early plantings of early importance.