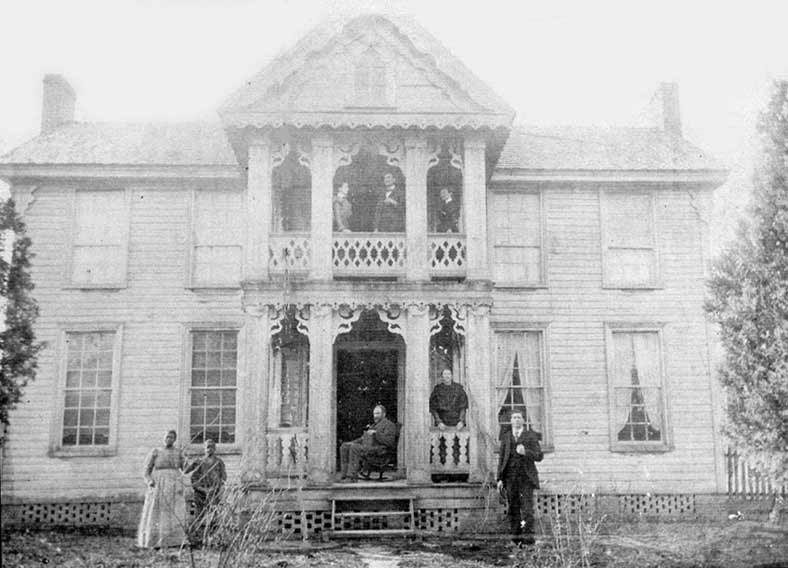 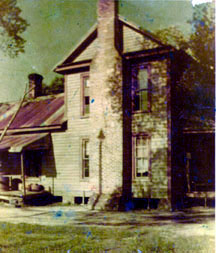 William Rayner, son of Joshua Rayner and his wife Martha Outlaw, was born 30 Oct 1812 at the family home in Bertie County near Powellsville, NC.
His mother died in 1820 and his father in 1825.
In 1830 Census I believe he is in the household of his brother in law Aquilla Oxley who was bondsman for his marriage bond.
He died 23 March 1860. Bertie Co Mortality 1860 Wm Rayner 46 m Mar farmer Ulcer 6 mos.

Eliza C Drew alias Nelly Eliza Drew daughter of Whitmell Drew and Penelope, his wife was borned 6th of Sept 1818–Family Bible Record.
She died 6 August 1856 age 38 years, 11 mo.
Her mother, Penelope Drew was a member of this household until her death 3 February 1880.

Will — Bertie Co NC dated 17 March 1860— May Ct 1861
I William Rayner of the County of Bertie and State of North Carolina. . . .
First, I give to my beloved sons Marcus J Rayner, Jno A Rayner, and William Rayner the tract of land whereon I now live to be equally divided between them & their heirs forever
subject to be rented out for two years for the benefit of my estate
Secondly I give to my beloved daughters Martha A Rayner, Mary A Rayner, Sally Eliza Rayner, and Araminta M Rayner
each one hundred fifty dollars to be paid by my Executors within five years from the time of my decease.
Thirdly I give to my beloved daughters Martha A Rayner and Mary A Rayner each one bed furniture (each to get bed, dresser &)
Fourthly It is my will and desire that all the residue of my estate of any species and kind after taking out the above named go to all my children
Fifthly I do at this moment constitute and appoint my beloved sons Marcus J Rayner and John A Rayner my lawful executors & execute this my last will according to the true intent and meaning of the same
In witness because of that I the said William R Rayner do at this moment set my hand and seal this the 17th day of March in the year of our Lord one thousand eight hundred and sixty.

This is my working hypothesis – the way, I see it as of this moment!! 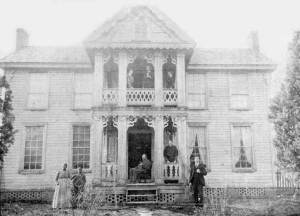 On the death of his father, William Rayner (1812-1860) Marc Rayner became the head of the household that included six younger siblings. The youngest William Reed Rayner was just turning seven. His mother had died in 1856, but her mother Penelope Drew (1799-1880) was also living with the family. Uncle Marc never married. It was Uncle Marc who gave Raynor Moore his first pair of long pants. (Before that he wore a dress.) Uncle Marc had a general store (the one Uncle Percy later had) in Powellsville where he also sold brandy that his family distilled.

Marcus Rayner was the head of the Populist Party in Bertie County in the 1890’s.

Bertie Co Wills M J Rayner dated 4 Jan 1901–proved Nov 1906
I M J Rayner being in sound mind and good judgment but considering the uncertainty and shortness of life and the certainty of death do hereby make indite and execute this my will and testament as followers viz.

1st I lend to my sisters Martha A Harrell and Arrie M Lenow the use of my farm conjointly provided if either one shall become in possession of a Farm of their own by purchase, gift, or marriage then while in possession of such farm said legates is to have no interest in my farm

2nd My sisters Martha A Harrell and A M Lenow is to have provision enough for one years support with a part of my stock.

3rd It is my will that my nieces Luta Harrell Trevathan, Lizzie Harrell Smith and nephew Josiah Harrell have my lands Josiah Harrell to have the farming part adjoining with the house inclusive, and he is to have his choice 1 one of my horses all his stock of cattle and goats etc

4th The balance of my property of every kind to be divided equally between Luta Harrell, Lizzie Harrell and Josiah Harrell when agreeable with the parties

In testamony where off I hereunto set my hand and seal this 4th day of Jany. 1901

The property of the said M J Rayner consisting of land, known as the Charles Freeman tract about 170 acres in Colerain Township worth about $1000 and personal property consisting of horses, cattle, hogs, farming implements, household & kitchen furniture & crops & peanuts is worth about $300 so far as can be ascertained at the date of this application.

Marcus B Evans appears to be the son of Lemuel Evans of Hertford Co and his wife Sarah Porter – both born about 1805. Marcus B Evans had married again by 1880 Martha. – but they seem not to have had children. His brother Judson B Evans named his son for Marcus.

Sarah Eliza and William L Mitchell had no issue.
Mrs. Sarah E Mitchell of Coleraine is listed as a teacher
in the 1890 & 1896 Directories

step – children of Sarah Eliza
Children of William L Mitchell and Mary Margaret Alston:
Margaret was the dau of James Alston and wife Elizabeth of Hertford Co [1850 census next to W D Pruden]

Jacob Lenow was a coach maker from Southampton Co VA.
The census seems to indicate that he had no children by any of his 3 wives.

Arrie and Jacob Lenow had no issue.

“The Falling Picture: A falling picture is one of the more common portents of death. A Bertie County, North Carolina, story illustrates how a person may be so marked for death. Shortly after the Civil War Arie Rayner Lenow and her family were living in the old Etheridge house upon the west bank of the Chowan River near Colerain. The Etheridge family had moved elsewhere leaving the house furnished, including the family portraits hanging on the walls. One night a violent storm swept over the countryside. Lightning flashed continuously and thunder jarred the house. Midway the storm the grandfather clock began striking while the hands were on neither the hour nor half-hour. Amidst the bonging Mr. Etheridge’s picture quavered and then fell shattering to ‘the floor, splattering the glass. Next morning, the news came, and it was not unexpected. Mr. Etheridge had died during the night and at the exact time his picture had fallen.”

“The Phantom Coach: John Alexander Rayner, had two sisters, Pat and Sally, who lived at the old Rayner homeplace in Bertie County between Powellsville and Cremo. A third sister (Arie), who had married the widower Lenow lived in a small house down the road apiece”. Before the War Lenow had lived in Rocky Mount with his first wife. He was rich then, and now he delighted in telling the Rayners about his fine coach and many servants. Such stories were about the only riches both families had brought out of the war.
Having advanced in years, one Sunday afternoon Lenow became very sick and he was expected to die at any time. Meanwhile Aunt Pat was sitting on the front porch of the Rayner home. Suddenly she sees this elegant coach coming down the road, a beautiful coach with a red capped coachman and two fashionably dressed black men standing behind, and drawn by fine black horses, stepping high. The coach carried only one passenger, a woman; it comes on down the road and goes around the corner towards where the Lenows lived. Then, just about five minutes afterwards, word comes to the Rayner home that Lenow had just died.
Aunt Pat was much perturbed. She could find no other person who had seen the coach although she inquired up and down the road several miles. Then she was convinced: Lenow’s first wife whom he seemed to have loved so dearly was waiting for him. When he died “she came and got him” – as told by Eunice to James Moore