such as at Millford, CT 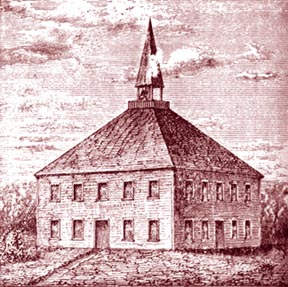 At each plantation was a building in which the church assembled for worship. It was built and owned by the proprietors of the plantation and was used for meetings of the General Court as well as of the Church. Having this double design it was called a meeting house. It was a permanent arrangement befitting a theocratic constitution of society. The meeting house at Milford was of wood, forty feet square, and had a roof in shape like a truncated pyramid surmounted by a “tower.” That at New Haven was of wood, fifty feet square and had a “tower and turret.” Edward E Atwater