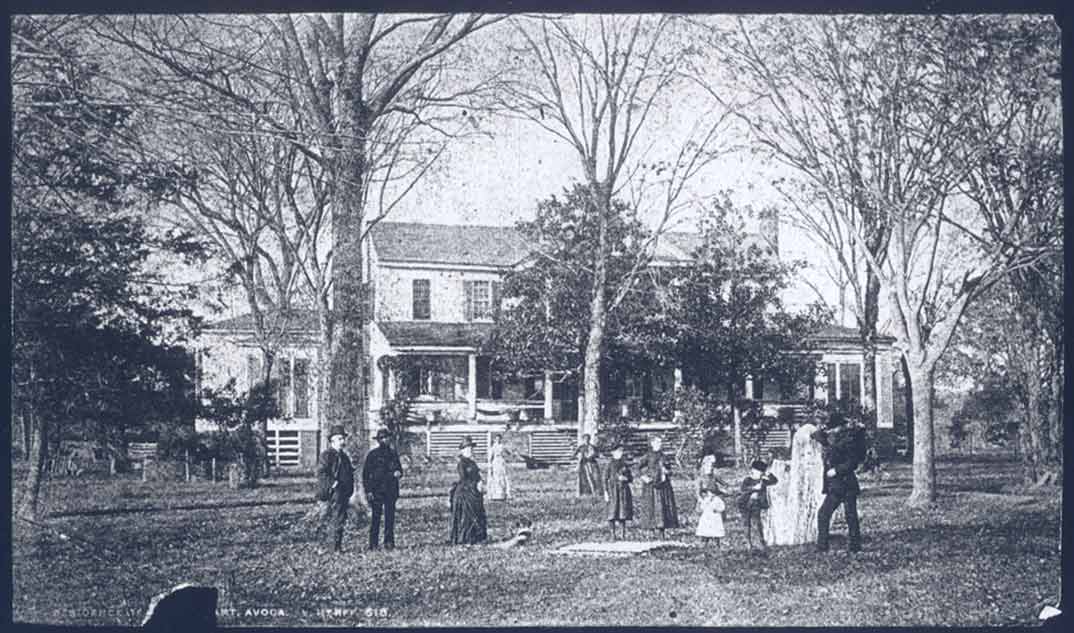 Bond Family History, Researched by Dixie Briggs is posted here at Dixie’s request.
This is Dixie’s working hypothesis – the way she sees it as of this moment!!

1799 Summons to Chowan Co to Wm. Bennett to appear in Edenton Dist. Ct. in James Sutton vs Henry Bond’s admr.

1815, March 15. Sarah Carter to Henry Bond Gift Deed #102 State of NC. Know all men by these present Edenton Chowan Co. that I Sarah Carter of the Town of Edenton & State aforesaid being about to leave this State for New York hath this day and do by these present have in the possession of my Son Henry Bond a certain parcel of household and kitchen furniture agreeable to a receipt taken from my said son of this date a copy of which receipt is below inserted; which furniture on my return from New York to be delivered to me and in case I do not return I do hereby for the love and affection I have for my two grandsons, Henry Alexander Bond and Samuel Tredwell Bond, give unto them all and every article of the said furniture which appears to have been left by me in the care of my son Henry Bond to be safely kept by him for my said grand children above mentioned. In witness whereof I have hereunto set my hand and seal this 15th day of Mar 1815. /s/ Sarah Carter. Wit: Jas. Horniblow.. (BK G2 pg 96 & 97. Chowan Co. Deeds) The document on page 97 is a receipt from Henry Bond to his mother, Sara Carter, itemizing a large number of items listed as household and kitchen furniture.

Born in 1791 in Edenton, Chowan Co. NC. Elizabeth Sarah died in Edenton, Chowan Co. NC in 1826, she was 35. Buried in St. Paul’s Cemetery Edenton.
The tombstone of Eliza was placed on her grave by her son who ignored her 2nd mg to Geo. Harvey and that twins were buried with her.
Henry Luton is bondsman for mg license Eliza & George Harvey.
Her tombstone reads “Eliza Bond, consort of Henry, daughter of James & Sarah Cotton & granddaughter of Sir John & Sarah Cotton of the Parish of Stande(sic), Limehouse London, England.
Died April 6, 1826, aged 35 years.”

1812 Sept. Term 1812″ “State of NC. Know all men by these Edenton Chowan Co. presents that I, Henry Bond hath this day bargained for, sold and by these present doth deliver unto Sarah Etheridge and her heirs forever, a parcel of furniture and named as follows..[a large quantity of furniture and furnishings appearing to be suitable for an Inn or Tavern]and I do hereby acknowledge that I have this day received the full amount and value in the sum of one hundred and seventy one dollars forty two cents of the above mentioned articles. In witness whereof I have hereunto set my hand and seal the day above written. /s/ Henry Bond in presence of Nath. Willards.

1816 Will of Henry Bond:
I, Henry Bond of Edenton, Co. of Chowan, in the State of NC, being of perfect mind & memory but sick in body do this 25th day of December in the year of our Lord 1816 make the following my last will & testament.
1. It is my wish & desire that the 2 lots of land, with the improvements thereon be given up to the possession of my best friend, Samuel Tredwell, to act with it as he thinks proper; if it can be saved after paying all my just debts, he will give the said Lots to my dearly beloved wife, Elizabeth Sarah Bond, to her & her heirs forever.
2. I give unto my 3 children, Henry, Samuel & James Bond my negro woman Phillis, to them & their heirs forever, having purchased the said negro woman Phillis from Clara Cotton for $200.00, which has not been paid to her. It is my will & desire that my old negro woman Phillis be sold and the money arising from her be appropriated towards the payment to Clara Cotton; that together with what she owes will be sufficient to pay her for negro girl Phillis, given to my 3 sons, Henry, Samuel & James Bond.
Lastly I do hereby appoint my friend Sam’l Tredwell my only executor having full confidence that he will do me full & ample justice. In testimony whereof I have hereunto set my hand and seal the day and year hereinabove mentioned. /S/ Henry Bond.
Wit: D. W. McDonald & Henry Luton.

1818 Vol. H. p8 Chowan Co. Deeds “Nov 17, 1818. Henry Luton, Clarissa Cotton & Elizabeth Bond, all of the town of Edenton, Chowan Co. to Joseph Manning of Edenton, for $1,600, land in Edenton in the old plan of said town beginning at lot #19 on King Street, and running east for 76 feet on King Street to John Bateman’s former line and north parallel to lot #20 for 340 feet up to lot #42 and west along south line of lot #42 for 10 feet then north along line of said lot 330 feet to Queen Street, then west along Queen Street for 66 feet, then south along the ally leading from the academy to the Court House ten hundred and sixty feet to the first station. Said lots descended unto Sarah Etheridge and Anne Luton from their father John Green deceased, one ? of which was sold on the property of the late Anna Luton by her Executor John M. Roberts to Henry Luton by deed dated March 15, 1817 and half was inherited by Clarissa Cotton and Elizabeth Bond as the daughters and only representatives and heirs of the said Sarah Etheridge, deceased.”

James Augustus Cotton is the son of Sir John & Sarah Cotton of the Parish of Stande(sic), Limehouse London, England. from grave stone of daughter Eliza

Sarah was the daughter of John Green. She has sister Anne/a Luton [I think Henry Luton is her son]

1846 Henry A. Bond, Sr. bought the Skinner House at 405 Court St., Edenton & the Skinner Law Office at 401 Court St. in 1846. It later became the home of his gr-granddaughter, Bessie (Badham) Leary and her husband, attorney Herbert Ross Leary (1887-1954) whose heirs sold the house in 1973. Henry A. Bond Sr. operated a mercantile business in the “Cheapside” block of S. Broad St. Edenton.
This block was destroyed by fire on 20 Sep 1893.
James A. Woodard, Sr. acquired 407-413 S Broad St. through his wife Annie (Bond) Woodard, a gr-dtr of Henry A. Bond, Sr. and put up the existing building about 1894. Lela M. (Bond) Jones inherited 405 S. Broad St. Edenton from her father a few months before the fire.
Her husband put up the existing building about 1894 presumably for his grocery business.
Another gr-daughter of Henry A. Bond, Sr. was Clara Lavinia (Bond) Preston (1880-1962). In 1920 she acquired the law office at 401 Court St. Edenton which her grandfather had bought in 1846 and expanded it into a family residence.

There is also a diagram of the church foundation and positions of the marked graves.
I think the orientation of the diagram is off 180 degrees judging from my looking under the church.

1880 Samuel is dec’d and Sarah’s occupation is shown as “Boarding House” with 2 boarders. This property was a large two-story residence at NW corner of Broad (Main) and Eden Streets. It was demolished between 1898 and 1904.
The existing building there built in 1924 houses Bank of America.
It was here Sarah died.

1882 a paper writing in the following words letters & figures to-wit:
-In the Name of God, Amen I, Sarah Frances Bond of the Town of Edenton, in the County of Chowan & State of NC having in view the uncertainty of life do make this my last Will & Testament, to-wit:
First – To God who gave me existence & in whom I have full faith and confidence and with wom I hope to dwell in blessed immortality I resign my soul.
Second – I desire the full payment of my medical & funeral expenses and all just debts that may be held against me at the time of my death.
Third: – To my son Francis Wayland Bond I give & bequeath a tract of land lying in the County & State aforesaid known as the “Luton” tract containing 320 acres bounded by the lands of the Paxton Heirs, Octavious Coke, W. R. Shannonhouse & others.
Fourth: – To my Son Dudley Graham Bond I give & bequeath the “Blount” lot situated in said town lying between Queen & Church Streets adjoining the lots of W. D. Rea & T. B. Bland, also the lot with improvements situated in said town lying between East Water Street & the Creek adjoining the lots of the Hathaway heirs & others.
Fifth:- To my daughters Mary Elizabeth Roberts & Cornelia Frances Green I give & bequeath the home place on which I now reside with all the improvements thereon situated on the corner of Main Street & Eden Alley in the town of Edenton, County & State aforesaid excepting the portions of the same hereinafter described given & bequeathed to another daughter.
Sixth: – To my daughter Sallie Skinner Lee I give & bequeath the house & lot on King Street known as the Skinner property situated in Said town adjoining the lots of G. B. McDowell and J.R.B. Hathaway. Also the vacant lot on King Street lying between said Skinner property and the McDonald lot on the East.
Seventh: – To my daughter Clara Cotton Capehart I give & bequeathe the House & lot a portion of the home place situated in said town occupying a front of 33 1/2 feet on Main Street and extending back 196 feet with equal parallel lines and adjoining the lot of Mrs. Martha Bright. Also a lot on Eden Alley another portion of the Home Place 80 feet square adjoining the Methodist Church lot.
Eighth: – The residue of my town and country real estate including my personalty I desire my Executor shall divide equally among my said children excepting the Parlor carpet & mirror & my silver forks which I desire to be sold & the proceeds divided equally among said children. Further should my Executor deem it necessary, he is hereby empowered to sell the residue of my town & country real estate at private or public sale and the proceeds arising there from I desire he shall divide equally among said children.
Ninth: – having full confidence in the ability & integrity of my son Frances Wayland Bond to discharge the duties of the office of Executor I hereby constitute and appoint him my sole Executor without bond to execute each & every provision of this my last will & Testament. In witness whereof I have hereto affixed my seal & set my hand this the 20th day of May A.D. 1882. /s/ Sarah F. Bond (seal) (Chowan Co. NC Rcd of Wills, Book E pgs 114-116)

The lot at 309 N Broad St. in Edenton was given by Henry A. Bond, Sr. to Millard F. Bond Sr. in 1887. He built the present house on this lot. Also involved in several local businesses, including fishing and the NY and Southern Telegraph Office. 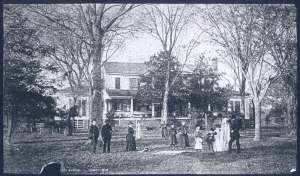 Avoca – ca 1900 -home of Dr. Wm. R Capehart (On your right with beard)
the woman in black on the left is his wife Clara Cotton Bond Capehart.
photo compliments of Dixie 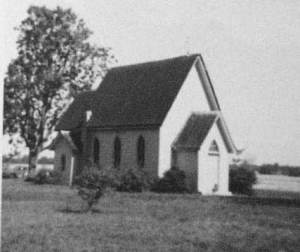 “The Church of the Holy Innocents”
the chapel built by Dr. Capehart on his farm
so his wife and children would have a convenient place to worship

The birth & death dates are taken from stones in the graveyard at Avoca Plantation. The property was formerly the home of the Capeharts and now owned by RJ Reynolds research facilities. Located just past the admin. building & surrounded by a black wrought iron fence. It is near Merry Hill high on a bluff overlooking the Mattaponi River and 1/2 mile west of the small Capehart family church located in Merry Hill close to the intersection of SR1502 (Avoca Farm Road) and SR1511 (Sutton Road)