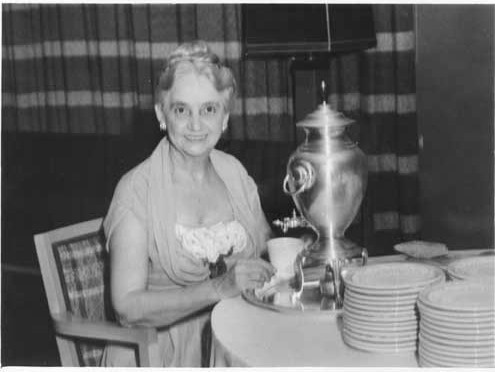 “Through the years, the Club’s chief interest has been the maintenance of the historic College Station Cemetery (Methodist Cemetery). It was established in 1837 and through the efforts of the Club have become a wildflower and wild bird sanctuary. A rustic light was purchased by the Club and placed at the entrance and red and white roses have been planted and maintained along the fence. Today A Texas Historic Marker stands near its entrance.” 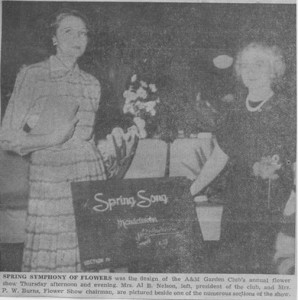 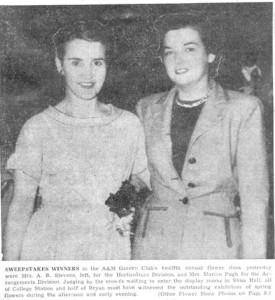 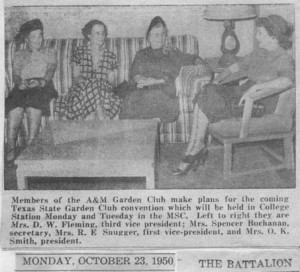 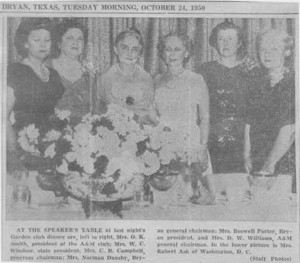 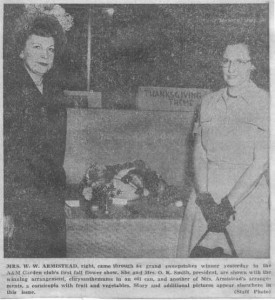 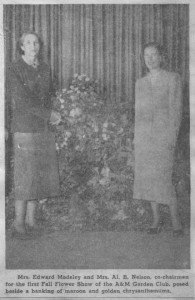 8 Dec 1950 – The plans were presented to the club for a forum or short course for Garden Clubs, as proposed by Mr. A F De Werth, to be sponsored by the A&M Landscape Architectural Dept. The first course was to be held on Jan 10, 11 & 12 with lectures each day from 9-11:30 a. m., practical application from 1- 4:00 p. m. followed by an examination on Friday morning. A certificate was to be awarded to all who passed the examination. Fees for the course was to be $1.00 with participants providing their own note paper and pencils. + and all work and details of registration was be done by the A&M Garden Club. The club approved the plans and Mrs. Armstrong Price was appointed Chairman of registration. Mrs D W Williams and Mrs C B Campbell were named as members of the registration committee. Then the club agreed to defray the expenses for the refreshments for this meeting.
12 Jan 1951 – It was announced that the above forum would be held Feb. 14, 15, & 16. Registrations to be accepted up to the morning of Feb. 14. On March 9 the minutes show the club approved a letter of appreciation to be written from the club to Mr. A S De Werth for the splendid forum.

– Members decorated the YMCA for Christmas, a project that was enjoyed and appreciated by the students and faculty at Texas A&M College [University]
– officers elected in Feb for the coming year

– Apr – Miss Ann Hickerson, daughter of Mr and Mrs R B Hickerson, was chosen to represent the club as duchess at the annual Cotton Pageant at A&M College May 4th.
– Club represented at TGC meeting in El Paso by Mrs C B Campbell and Mrs Armstrong Price
– Club received 2nd place State award on 1950-51 yearbook 98%
– Club also received a second place in last year’s spring show.
– Mrs R E Snuggs compiled and submitted a club scrapbook 1936-1949 which won the Purple Award in the State Garden Club in 1950. [in 1953 this Scrapbook History was on deposit in the A&M Library]