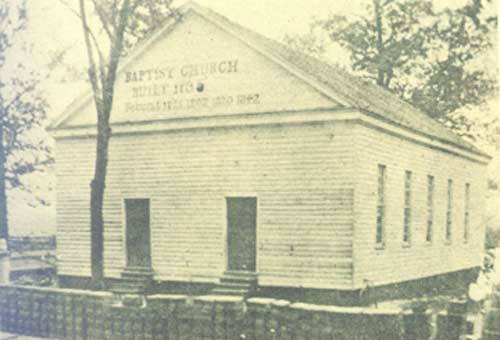 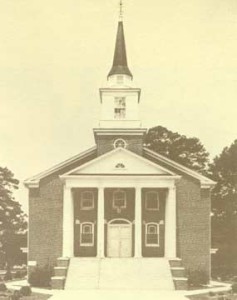 from 1847 “History of the Baptist Church worshipping at Parker’s Meeting House, called Meherrin, by the Clerk [SJ Wheeler] “In his [John Comer of Boston] Journal for 1729 Mr. Comer says, ‘this day I received a letter from a Baptist Church in North Carolina, settled about two years ago by Mr. Paul Palmer, signed by John Parker, John Jordan, Benjamin Evans, John Parker, John Brinkly, Thomas Parker, James Copeland, John Welsh, Joseph Parker, Wm. Copeland, Joseph Parker and Michael Brinkley.’ ” This church assumed the name of Camden. In 1812 the name was changed to Shiloh.
“Now Joseph Parker, one of the names in the list quoted from Comer’s Journal, was a minister of the Gospel and following the tide of emigration westward, settled in the “wilds of the wilderness” as the lands were then called, which subsequently were surveyed and became Hertford County. The land he settled adjoins the church lands where the church stands at this time. . .about the year 1735 the first house on this spot was consecrated to the worship of God. This house was built of hewn logs, and was 20′ by 25′ in size. . . In 1773 he [Joseph Parker] removed, according to tradition, “South of Tar River.” and there ended his earthly pilgrimage. . .about 1791 or 1792 and was buried in Robert Wyrington’s burial ground on Wheat Swamp. . .In the great reformation which took place among the Baptists of North Carolina, Elder Joseph Parker, William Parker and Winfield refused to unite. As the reformed Baptists were styled Separates, the Parkers and their adherents assumed the name of Freewill Baptists.
Rev. Lewis Whitfield, an aged Baptist minister in Carteret county, says that Elder Joseph Parker ‘was a square-built man” with broad face, about 5 feet 8 inches high: in his latter years wore on his head a cap continually. His manner in preaching was full of animation’ . . . . Elder Parker was a consistent Christian, a zealous and successful minister. While pastor of the church [Meherrin] he lived on the farm on which he first settled on his removal from Camden.

from 1847 “History of the Baptist Church worshipping at Parker’s Meeting House, called Meherrin, by the Clerk [SJ Wheeler] –
.about the year 1735 the first house on this spot was consecrated to the worship of God. This house was built of hewn logs, and was 20′ by 25′ in size. .
..In 1775, it was found necessary to rebuild the meeting house, which had stood forty years. . .the Parker family, aided by Peter Deberry, and a few other friends constructed a new framed house with their own hands, which was afterwards enlarged by the addition of sheds on the western and northern sides. This house stood until 1802.
.. in 1802, it was again rebuilt under contract by King Parker for $142. The commissioners appointed by the church to superintend the letting of the building were Elder Jno. Wall, brethern Wm. Parker, Wm. B Cheatham, together with Lewis Meredith and Jno. Pipkin, Esqrs.
…in May 1818, this house was underpinned with brick.
–in 1826, the house was again rebuilt. The contract for building was taken by Isaac Langston, under the supervision of brethern Jno. Wheeler, Thos. Deanes and Silas Parker and Messrs. P. Brown and Wm. B Wise, commissioners.
— in 1842, again rebuilt by B Overton, contractor: commissioners — Rev. G M Thompson, brethern Silas Parker II, D Jenkins, and Messrs J G Rea and L M Cowper. 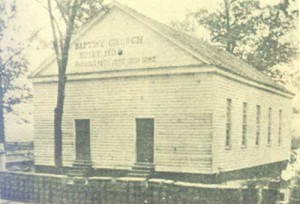 from Dr. Thomas C Parramore 1998 “Trial Separation: Murfreesboro, North Carolina and the Civil War” page 84 a quote from C H Foster’s article “A Grandmother of Churches” appeared in the “Biblical Recorder” 19 Dec 1877 having first appeared in the “Murfreesboro Enquiror” 9 Aug 1877
Visiting Meherrin Church during its “third-semi-centennial” in 1877 CH Foster described it. “The people come daily, on foot, and in carts, farm wagons, buggies, and vehicles of all descriptions, some of most primitive pattern, and others of latest modern styles. They come too, by whole families, . . .bringing with them abundant cooked provisions. . . The meeting-house was crowded, the sexes sitting apart, on opposite sides of the main aisle, as is the general custom of rural congregations. . . . Beside the thousand or more . . . within the sanctuary [many on the floor], an equal number stood patiently without, or sat on rude benches improvised for the occasion. Nearby hundreds of mules and horses were fastened to convenient trees.
“The deep but low-studded gallery, extending across the rear end of the building is filled, as in olden times, with devout Negroes. All are . . . serious in their demeanor. The day begins with a sunrise prayer-meeting. Hymns, . . .elsewhere well nigh obsolete, are sandwiched between the prayers, the whole assembly joining in without books. For the sturdy forefathers of this people both book and candle were Romish symbols. . . .Most of the old fugues are “deaconed out,” the leader . . .repeating two lines at a time, which the crowd take up and sing with vigor. . . .And so with mingled orison and songs the hours pass, till at 11 o’clock, the minister commences the formal service. . .” His visit, Foster wrote was like going back a hundred years.”

from Burkitt’s 1803 History of The Kehukee Baptist Association [org. 1765]
“This church was originally gathered and constituted on the Free-will plan.
Elders Joseph Parker, William Parker, Winfield and others of that order preached here. Elder W Parker was in the exercise of the pastoral functions as early as the year 1773. . . . After the death of William Parker, the church requested Elder Burkitt to attend them, which he did. [The church was reorganized and admitted to the Kehukee Association in 1794. In 1802 Elder Wall of Southampton, Virginia became Pastor thereof. In less than two years about one hundred and sixty have been baptized as many as twenty three in one day. . .The meeting-house was of a small dimension before, but has been by addition made a very commodious house of worship since the revival commenced. . . .The number at present [1803] is one hundred and seventy-five.”

Parker’s Meeting House, called Meherrin was the mother church of several others. [members were dismissed to form other churches]
1740 – Bertie [Sandy Run]
1804 – Ahoskie in Oct 1805 they were received into the Kehukee Association
1806 — Middle Swamp in Gates County [in turn she is the mother of nearly all the Baptist Churches in Gates County] 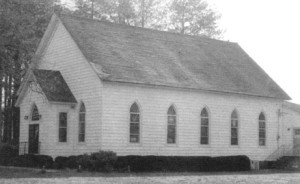 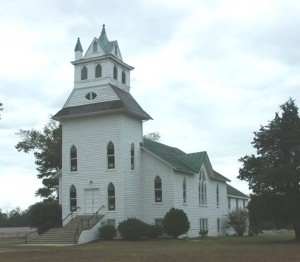 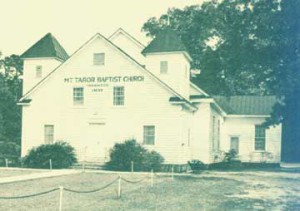 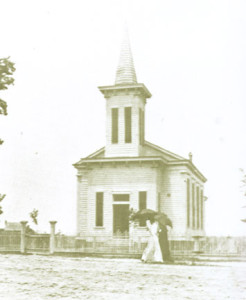 In 1786 the Legislature established the town of Murfreesboro on 97 acres of land adjoining Murfree-Landing. For many years Parker’s Meeting House was the only place of worship in the community.
— the first Methodist preacher that visited the place was Rev. Jesse Lee. Wm. Lee was living at the time in Prince George County, VA and visited this neighborhood in Nov 1782 on his way to Edenton. Mr. Lee was “received and esteemed without reference to peculiarity of religious opinions.” Mr. Lee and other Methodist ministers continued to visit Murfreesboro for several years. In 1806 Rev. Samuel Wells, settled in the place and set up regular services. Some years afterwards a meeting house was erected. In 1815 Rev. Daniel Southall settled in the place. In a few years the influence of the Methodist predominated over that of all others. 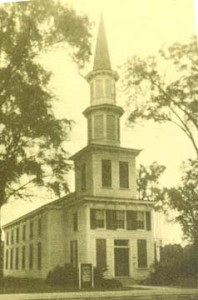 — the Presbyterian missionary, James Douglas, visited in February 1824 and our citizens were so well pleased with him that they invited him to settle in the village, pledging him $300 per annum, if he would preach two Sabbaths in a month. To aid in his support he took charge of the male academy. Indeed his influence was highly evangelical in every sphere in which he moved. 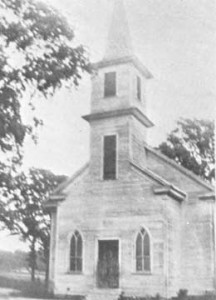 the old Presbyterian Church
Main Street
Murfreesboro, NC
by 1860 “had withered into a showroom for T J Deans’s carriages”

— Episcopal – The Parish of St. Barnabas was formed in 1759 when Hertford County was formed. The Rev. John Alexander began to preach within its bounds in Spring of 1768. By 1786 he had retired from his ministerial labors and died in 1799. The next resident minister was the Rev. Joseph Gurley who came to Murfreesboro ca 1792.
“Tiny congregation” in 1860. 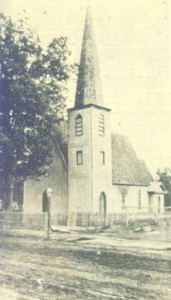 Sources used include:
“History of the Baptist Church worshipping at Parker’s Meeting House, called Meherrin” by the Clerk [SJ Wheeler] printed 1847 in Raleigh at the Recorder office.
“A Concise History of the Kehukee Baptist Association” by Burkitt and Read [1803] [1850 Revision]
“Forgotten Gates” by Thomas R Butchko – pub. by the Gates Co Historical Society
“Renaissance in Carolina 1971-1976” – pub by the Murfreesboro Historical Assoc.
“Renaissance in Carolina II” by E Frank Stephenson, Jr – pub by the Murfreesbor Historical Assoc.
“The Religious Situation In Hertford County Prior to 1789” by Hargus Taylor included in “Hertford County, the First Two Hundred Years 1584 – 1789” pub by the Hertford County Bicentennial Commission headed by Frank Stephenson Jr.
“Trial Separations: Murfreesboro, North Carolina and the Civil War” by Dr. Thomas C Parramore