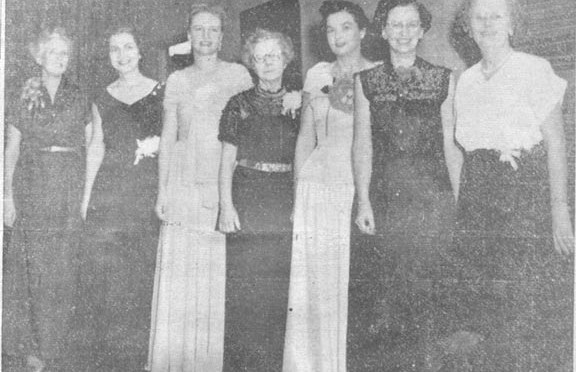 One afternoon in early October 1936 at a bridge party Mrs. A B Conner said, Why don’t we organize a Garden Club?”
“What a great idea!” Mrs. C B Campbell immediately assumed leadership and called a meeting for Wednesday, October 14 in the YMCA Chapel on the A&M campus to organize the Garden Club. A notice of the meeting was put in the local paper urging ALL interested men and women of College Station and Bryan to attend.
Seventeen people attended the first meeting and, also. many who could not attend that day, called to say they would join the club. Those present named the club “The A&M Garden Club” and elected officers: Mr. George Wilcox, President
Mrs. A B Conner, Secretary-Treasurer
Mrs. Nat Edmondson, Reporter
– As soon as the By Laws and Constitution were written and approved, the club immediately affiliated with the Texas Federated Garden Clubs.
– The purpose of the club was and is
“To promote an interest in horticulture, landscape, flower arrangement and conservation.”

1936-1937: Mr. George Wilcox – served as first President. The dues were set at fifty cents.
The YMCA was chosen as the meeting place and the time chosen was 4 o’clock on the first Friday of each month October through May.
Then Chairmen to the following Standing committees were appointed:
Program: Mrs. Campbell

Membership: Mrs Irvin – By the end of the year this club had 48 members and $25 in the bank.
Flower Arrangements: Mrs Summey – each meeting an arrangement by different member
Plant and Seed Exchange: Mrs. Holtzman –

By Laws & Constitution: Mrs. Leland
– In Jan 37 the By Laws were approved
– money sent in to join the Texas State Federation of Garden Clubs.
– A vice-president called for in the constitution was then elected: Mrs. D W Williams
– A report was made to the State President in April.

Decorations – Mrs. Wilcox
Seed Exchange – Mrs. Halsell
– Club decided to send honorary memberships to the speakers of last year’s programs.
4 Feb – Meeting time was changed to 3:30 [instead of 4]
6 May – New officers were elected for the coming year.

7 Oct
– Mrs. Mogford announced she and Mrs. Carter had been chosen judges for the Brenham Club
– that Miss Sadie Hatfield would represent our Garden Club at the State Board Meeting at Corsicana Oct 11.
– Mrs. Campbell reported on the pilgrimage to Williamsburg, VA
– and stressed the Club’s major Project of the Removal of Signs along the roadway.
3 March
– Club voted to have the Spring Flower Show;
– Mrs. Campbell offered her home and invite was accepted. But happened as below.

– 6 May – New officers were elected for the coming year.

May – New officers were elected for the coming year.
Dues were raised from 50 cents to a dollar.

The judges notified the club on the 10th of April that they were not going to be able to come to judge the show; that is how it came about that it would be judged by popular ballot.

Club voted to send President Doane and the President elect to the Federation meeting at Mineral Wells. Alternates Mrs J E Roberts and Mrs Campbell were elected.
– Tea was served at a very attractive table by Mrs Culpepper, hostess.

– Mrs C B Campbell and Miss Sadie Hatfield are members of the State board of TGC
Through the efforts of TGC the Big Bend National Park has become a permanent park.

5 Feb – Delegates elected to the annual State Meeting of Garden Clubs at Houston are:
Mrs A M Waldrop and Mrs J C Roberts with Mrs D W Williams and Mrs CB Campbell as alternates. [Waldrop and Campbell [and Miss Sadie Hatfield] made report to club on 5 March]

– New officers were elected for the coming year.

5 Nov – Mrs Mogford had attended short session of the judging and flower arranging school in Houston.
– Yearbook for the year distributed

7 Jan – “Mrs Waldrop introduced Mr Walter Coulter who came to tell us of his gift to the city of the triangle at the entrance to Bryan. This plot is to be given through the Garden Club and we are to landscape it. Mr. Coulter was given a rising vote of thanks.”
[“Coulter Mini-Park” is the oldest Mini-Park in the state. This park is presently maintained by the business adjacent it.
Mrs. Dona Coulter Carnes was a charter member of the club and the force behind the establishment of “Coulter Mini-Park.” She was listed in “Who’s Who of American Women” in the Southwest and “Texas Women of Distinction.”]

4 Feb – Mrs Williams moved that the offices of Secretary and Treasurer be divided. Carried.

Edith and Ethel Cavitt were long-time members of the club, they were outstanding horticulturists.

7 Apr – club elected Mrs Roberts delegate to TGC Conv. with Mrs Yarnell alternate and Mrs Williams as second alternate.
– Mrs Campbell told about Mrs Collier’s being chairman of state highway beautification and asked if the club would sponsor planting crape myrtles along the highway between Bryan and College. Mrs Roberts moved that we go on record as sponsoring this planting as a memorial lane. Motion carried.

12 May – Mrs. Roberts gave her report of the TGC Conv. and then the club votes “to invite the [Texas] Garden Club Board to hold their fall meeting with us.” motion carried.

10 May – Pictures of the flower show first and second place winners were shown. It was decided to keep these pictures in a book for the club.

1945-1946: Mrs. J E [Virgie] Roberts –
1st Vice-Pres: Mrs Yarnell
2nd Vice-Pres: Mrs G D Stephens
Secretary: Mrs C A Robinson
Treasurer: Mrs J E Marsh
Reporter: Mrs J B Wilcox
7 Sept – at the Y
– decided that club have a 3rd Vice-Pres – whose duties shall be to make arrangements for flowers for special events.
– Mrs Yarnell announced that the club members will be divided into teams each with a chairman and vice chairman. Every member will have some part on at least one program for the year. There will be a choice of subjects for the programs.
– a club library to be established. [Mrs. Campbell invited the club to use her front room for the Library.
5 Oct: – club decided to change the meeting date from the first Friday each month to the second Friday.
– Mr Gay has invited the club to use the YMCA for its library.
9 Nov – Mrs Arbuckle elected third Vice Pres.

15 Mar – club wishes to give every assistance to the organization of a Bryan Garden Club.
– club votes to send incoming president Mrs Barlow to the State meeting in Austin April 18-19