Sarah is possibly one of the younger daughters of Lewis Bryan and wife Elizabeth Hunter.

1711 – Thomas Sessoms, his father, died before the April Ct. Chowan Co, NC
1712 – Richard Smith of Surry Co VA, his grandfather, left Elizabeth Boon and Richard Sessoms, a cow in his will.

Will of Henry Hart 4 Oct 1780 – Feb Ct 1785 Edgecombe Co, NC
Will Book C, page 5
-Wife Priscilla – mare, side saddle, sow & pigs, etc.
I lend my wife Negroes Dick, Jack, and Mial for her lifetime or widowhood, with reversion to my children Clary Hart and Mary Hart.
. . . the use of Negro Hannah
– Son Joseph Hart – the manor plantation where I now live,
except for the orchard where Mary Braddy now lives,
which I give to my son Richard Hart for the term of four years,
Then to be given to my son Joseph.
Son Joseph – Negroes Sam and England, sows & pigs.
– Daughter Sarah (no surname) – Negroes Dinah, Patt, bed, cows, calves.
– Daughter Zada Hart – Negroes Esther and Ben, bed, etc.
– Daughter Anne Hart – Negroes Poll and Beck, bed, etc.
– Daughter Clary (no surname) – Negro Jane, and at my wife’s death, half of Negroes Dick, Jack, and Mial.
– Daughter Mary Hart – Negro Rose and half of Negro Hannah.
– Son Richard – land I bought of Pilgrim Pope and his son, also Negroes Sam and David, horse, tools, etc.
Remaining estate shall be kept together to bring up my children.
Executors: wife, son Joseph, friend Isaac Sessums
Wit: Edward Hall, William Fort, John Idlery

Will of Priscilla Hart
13 Aug 1798, proved Nov Ct 1798 Edgecombe Will Book D, page 61
“being feeble in body.”
– Son Richard Hart – iron pot, chest, half my cattle, large Church Bible, etc.
– Daughter Sarah Ellbeth (unclear if this is supposed to be Elizabeth) and
daughter Mary Hart – all hogs, corn, etc.
– Daughter Mary – half my sheep and half my cattle.
– To Elizabeth Biggs (no relation stated) – one heifer.
– Daughter Nancy Fort – cow and calf.
– Daughter Mary – kitchen furniture, bed,
etc.
– Son Richard – copper kettle.
– To Elizabeth Biggs – the bed I bought from my mother.
My money is to be used to satisfy a debt due Telfair from Henry Hart, deceased.
Executor: friend Exum Phillips, Sr.
Witnesses: Kissiah Davis, Starling Digges

It appears this family moved to Johnston County — see the following

Edgecombe County marriage bond for Mary J. Hart to Henry L. Lyon, 3 November
1826. According to deeds, this family moved to Alabama about 1836.

According to the DAR application, Jacob was a Patriot, providing service to the American Revolution. He was a large landowner and active in County affairs as evidenced by the Edgecombe Deed books and Court minutes. 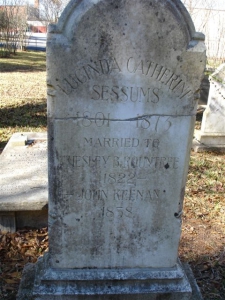 E-Mail 30 March ’08: I believe this is your Lucinda Catherine Sessums, daughter of Alexander Sessoms, and who married Chesley Rountree, son of William Rountree. If so, she was born in 1801, not 1803. Her grave is at Oakwood Cemetery in Huntsville, Tx, steps from Sam Houston.
Her 2nd husband was John Keenan, father by a previous wife of prominent Walker County/Texas doctor and politician, Dr. Charles G. Keenan (see Texas Handbook).

She and Chesley Rountree were my GGG grandparents.

Lucinda’s Rountree sons and daughter moved with her to Huntsville and were at Oakwood with their families. Catherine Elizabeth married a W.A. Parish. I descend from them, my mother being a Parish. There are many Parishes at Oakwood, all (we think) descended from, or married to descendants of, Lucinda Sessums Rountree. Marjorie Shaw

My grandfather was William Thomas Sessums, his father being Thomas Hudson Sessums,
whose father was Cader Sessums (who served in Co. B, 8th Mississippi, and Co. I, 46th Mississippi Infantry, CSA). Through Michael, I have directly traced mine back before the American Revolution in NC, thence
to Mississippi, then on into Texas. – Danny Sessums

Sorry for the delay but I’ve been out of town attending the Texas Assn. Of Museum’s mg. in Waco, then on other business in Dallas. Cader’s father was William Thomas Sessums (Ca. 1807) and Zelphi Cooksey, his wife.
He was a direct descendant of Jacob Albert Sessums (Ca. 1777) & Penny Fisher of Edgecombe Ct., N.C.
That’s as far back as I’ve been able to get, although I have knowledge of a Nicho. Sessums in Virginia in 1716.
Do you know anything about him?

Also, do you know about any of the Sessums’ reunions? I went to one in Hillsboro many years ago, then to another in northern Arkansas about for to five years back. There is a third somewhere in Central Texas, perhaps near Johnson City, LBJ’s old home. Any help you could
provide would be appreciated.- Danny Sessums

I MAY HAVE located another daughter of Jacob Sessums of Mississippi and later Panola County TX, who died around 1856.
I am working on a Samuel Courtney, who born in 1814 in Mississippi (his father’s James Courtney’s Bible record).
James and his family moved to Simpson County, Miss. Around 1830 where his son Jesse is shown in the 1830 census living next door to Jacob Sessums.
I assume that Samuel and Sarah Sessums married about 1830 or 31 in Simpson since their oldest child Isabella Jane Courtney was born in 1831 (tombstone). On Jane’s brother’s Texas Death Cert. his mother is Sarah Sessions. Jane’s Death Cert just states Sarah Courtney. Some of the older relatives, now deceased, related that Samuel Courtney’s wife “was a Session’s. One piece of detailed data that makes me more suspicious is 1850 Census of Panola County Texas.
The family shows a Charity Courtney and names that are very similar to Samuel and Sarah’s children, i.e., Solomon, Samuel, Penny, Rueben, Nancy Jane, etc. In fact, I wonder if Charity might have been the wife of Jesse Courtney, who was living next to Jacob in the 1830 census. The age based on the 1850 census seems to be off 2 or 3 years but, as you know, this is not unusual. Like I say it is only a guess at this time, but I thought you might want the information for your files. David K. Tucker, Houston, Texas

Also from the estates papers of Edgecombe:
The estate file of Rhoderick Sessums contains only a piece of paper that was a citation (Feb. 1806) to his widow Mary Sessums, asking her to show proof why administration on his estate should not be granted to Shadrach Collins. (As we see above, they had just married in 1805) Notes from David Gammon

1769 – “Solomon Sessoms orphan of Richard Sessoms comes into court & chooses Isaac Sessums his Guardian etc.” Book II p 232 [ he would be at least 14 yrs of age]
Edgecombe Ct, 5 Aug 1789 – Solomon Sessoms exempted from taxes on 296 ac. of land for 1788
had a blacksmith shop in Tarboro Justice of the Peace

Also from the estates papers of Edgecombe:
The estate file of Solomon Sessums indicates the said Solomon died December 1817, and that his daughter Elizabeth Sessums later married Exum Lowe and died intestate and without issue. As a result, her estate descended to her brother Isaac Sessums of Nash County, sister Sarah, wife of John Alexander Irwin, and sister Charlotte Dancy. This petition is undated, but appears to be in 1824 or earlier, as there is a summons also in this file, dated Sept. 28, 1824, in which John A. Irwin and wife are summoned to answer to Isaac Sessums.

Is this the Thomas Hodges you mention on your website? If so, his daughter
Nancy Smith was the ancestor of all the Kitchins of Scotland Neck, including
Governor W.W. Kitchin and US Senator Claud Kitchin. E-Mail from David Gammon

Ref: Nicholas Sessoms and Some of His Descendants by James E Morgan Jr
Abstracts by J W Watson of Estate Records of Edgecombe Co.
Notes from David Gammon