Account of Sales of Estate of John Simons, dead,
exhibited into Court by Ann Simons and Abraham Riddick- 21 May 1798.

William [Henry Rountree] had inherited the Plantation House built in 1812 in Sunbury from his father, Solomon Rountree. I believe his Grandfather Abner Rountree built the house. When I visited the house in 1955, it was in appalling repair, but a tenant farmer was living there. It had the date 1812 in the chimney. The porches that used to wrap around the unpainted house were gone. I have a picture of it taken in 1935 when it was already in bad shape. William had another farm where he lived with his family at Merchant’s Mill, which was nearby. I remember that the trees covered with Spanish Moss along the drive to that house. – John Macon.

Simeon was born ca 1800 the son of Abner Rountree (died 1816) and his second wife Ann Riddick, widow of John Simons. He lived on the ground his father Abner bought in 1800. He built a home ca 1830 about 200 yards east of Abner’s log house that stood near the family cemetery. Simeon and his wife Elizabeth both died in March 1850 of encephalitis.
Their house was inherited by their son Alfred Gatling Rountree (1826-1907).
It is near Eleanor’s Crossroads and Wiggins Hill.
There was also a son named Abner born ca 1836 (listed with his Uncle Solomon Rountree’s family in 1850 Census.) 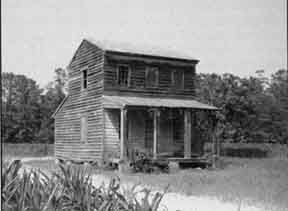 from the Kaye Herndon Collection

half-sister of Solomon and Simeon Rountree

e-mail from David Jenkins
My mother’s family was originally from Gates County, North Carolina and I
have been researching my “roots” on ancestry.com. Recently I discovered
that my great great grandfather, Alfred Parker, the son of Humphrey Parker,
Jr., married Emeline Rountree in Gates County in 1860. I believe that she
was the daughter of James and Drucilla Rountree of Nansemond County, VA and
appears on the 1850 US Census. According to his death certificate, James
Roundtree was born about 1816 and died on 6 Jul 1877. His father is listed
as “Robt” Rountree and his mother as Nancy Rountree. I believe this to be
the Robert Rountree listed as Robert Rountree, Jr. on US Census reports for
1820 and 1830 and living in Nansemond County, VA.

half-brother of Solomon and Simeon Rountree

Robert Simons was the son of John Simons and Nancy Riddick.

Children of Robert Simons and Phiny — :
1. Joseph Simons born between 1815 & 1820
a. Margaret Parker of Texas (Jobe),
b. Carthaginia Lassiter of VA (Richard),
c. John Westley Simons of Hertford County,
d. Joseph Simons of Gates County, who was infirm/idiot.
2. Nancy Simons ca 1820 – born between 1820 & 1825
married bef 1839 George Polson 1805 – April 1850
a. Martha E. Polson ca 1839 – no further info
Martha E. Polson married Shadrick Piland on 1 July 1861 in Hertford County. The couple then moved to Pierce County, GA, and remained in Georgia. Shadrick fought in the Confederate Army, and Martha did apply for a widow’s pension. Shadrick died in 1896, and Martha died in 1916. They had 8 children that lived to adulthood.
b. William Henry Polson ca 1841 –
c. Mary E. Polson 11 July 1842 –
d. Arrena Polson ca 1844 – NFI
e. Olivia Polson ca 1845 –
married John Morris
f. George T. Polson ca 1847 – 1878 TX
married Emma Higgins
George T. Polson moved to Texas. At some point, he married Emma, whose maiden name as per her daughter’s death certificate, was Higgins. I haven’t yet found a record of their marriage. George died in 1878, and he still retained an interest in property in Gates County, which interest passed to his children. They were Allie Ameta ‚Emma, William Henry, and George T. The children and widow remained in Texas and all are buried in the Youngblood Cemetery in Panola County, Texas.
g. Sarah J. Polson ca 1850 – NFI
3. daughter born between 1825 & 1830
4. daughter born between 1825 & 1830
5. Robert Simons ca 1831-
married Emma Morris
Robert Simons (son of Robert and Ascenith/Theny) apparently died without issue as his estate was distributed to the 4 children of his sister, Nancy and the 4 children of his brother, Joseph Simons. These were Martha Piland of Georgia (Shadrick), Mary Jones of Gates (Edwin), Olive Morris of VA (John), Sallie Willoughby of Gates, Margaret Parker of Texas (Jobe), Carthaginia Lassiter of VA (Richard), John Westley Simons of Hertford County, and Joseph Simons of Gates County, who was infirm/idiot.

I’m descended from Nancy and John Simons through their son Robert. His
wife’s name (or maybe I should say my ancestress’s name, since I don’t
know if he was married more than once) was one of those odd names –
Ascenith or Asceneth. She’s listed as Theny on one census, and as A.
Sena in her will:

I’m descended through Nancy and George Polson. They were married before
1839 and George died in April, 1850 – he’s in the mortality schedule for
that year:
George Polston Age 45 , Male , Married , Born in NC, Died in April,
Carpenter by trade, Died of Erycipiles, Was sick 12 days.

A foot note by the enumerator: “The large number of Deaths in this
County was owing to the Small Pox and Erysippelass during the Winter of
1849 and 1850.

I have no further information on Martha, Arrena, George or Sarah.

William Henry Polson married Majester Caroline Jones, daughter of Joshua
Jones and Margaret A. Wiggins (this was her second marriage. She
outlived William and married a third time). They were wed 29 November
1870, and he died sometime prior to 1882 (date of her third marriage).
Their children were:
Ada L. Polson, born 10 Feb 1873, married Alonzo Hill, 5 Jan 1893 in
Gates County. They had at least one child, Hallett Hill. I don’t have
death dates for Ada and Alonzo.
George Thomas Polson, born October 1875, married Diana Brinkley. I
don’t have their marriage date, or death dates for them. They had 9
children: William, George T., Jr., Irene M., Willard, Arthur Coleman,
Thomas Leroy, Emma, Royal L. and Nitta. I don’t have further
information on them.

Other children of William and Majester are Ella W. Polson and Nettie
Polson, but I don’t have further information on them.

My ancestress is Mary Elizabeth Polson, born 11 July 1842, died 16
November 1920. She married Edwin Jones on 8 March 1860 in Gates County
(there’s another Edwin and Mary Polson in Gates County at the same
time. My couple lived in Hunters Mill, and my Edwin is the younger of
the two men). They had 12 children, and it would be easier to give you
details on them in a separate e-mail (provided you want them, that is).

Olive or Olivia Polson was born about 1845 and died prior to 1900. She
married John Morris on 10 January 1867 in Gates County. There was a
huge difference in their ages – he was born about 1817. I do not know
if he’s any relation to Emma Morris, wife of Robert Simons. John and
Olivia moved to Nansemond County, VA and had 11 children, 3 of which
were dead of scarlet fever according to the mortality schedule of the
1880 Federal Census. Their names were: John, George (died 1880),
William T., Alfred, Martha Olivia, Frederick (died 1880), Nancy, Irene
(died 1880), Walter G., John F., and Hattie O.

The only child that I have additional information on is Martha Olivia
Morris, who married Elisha Jasper Howell. Martha was born August 1874
and died November 1954 in Warwick, VA. Elisha died 7 December 1941 in
Newport News, VA. They had 5 children.

Nancy Simons Polson remarried after George died. She married Thomas
Willoughby on 1 December 1853, in Gates County. They had a child, Sarah A. Willoughby, born 1859.

I don’t know what happened with Sarah – I do know that two of the
descendents of Edwin and Mary Jones ended up owning land referred to as “the Willoughby farm or tract”.

In the 1850 Federal Census, there’s another woman living with Nancy and her children – Elizabeth Jones, aged 56. I don’t know if she was any
relation to Nancy, or a relative of George Polson, or a servant.

Another Simons related thing is that in the 1870 Federal Census, a John
Simons, aged 19, was working on the farm of John and Olivia Morris, and the census indicates that he was born in Virginia.

Thanks for making your findings public, and let me know if you’d like
the additional information on the children of Edwin and Mary E. Jones.