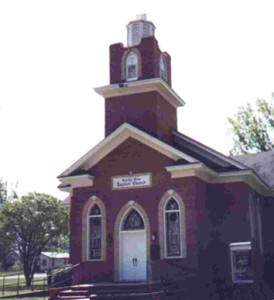 Sandy Run Baptist Church in Roxobel is one of the oldest Baptist churches in North Carolina.

I was a small lad of 11 when on July 24, 1936, there came a severe thunder and lightning storm. I was living at the Powell place, directly across from Roxobel-Kelford school and about a half-mile from Roxobel.

We heard a loud crack of thunder and saw a sharp streak of lightning, and someone said, “That bolt of lightning struck something.” Very soon we learned that Sandy Run Church had been hit and was on fire.

We ran as fast as we could toward Roxobel to get to the scene of the fire. All the way there we were guided by the sight of the smoke. For an 11-year-old this was really something.

When we joined the group of onlookers, several of the ladies were crying and all the men had grave expressions on their faces. But there was nothing to be done but let it burn.

I remember honey running down the side of the church from the eaves, where evidently a hive of bees had nested for many years. That was one experience I will never forget.

from Burkitt’s 1803 History of The Kehukee Baptist Association [org. 1765]
BERTIE CHURCH – so called as it was the first church constituted in Bertie County.
The meeting-house stands in the upper end of the county about three miles from Norfleet’s ferry, on Roanoke river, and about two from Sandy-Run.
The first minister of the Baptist society that preached in this neighborhood was Elder Thomas Pope and through his instrumentality the church was gathered here; and Elder James Abington est 1725 – 1772 who was converted under the ministry of Elder Pope joined the church and at length became the pastor thereof about the year 1764. [In 1765 they were constituting members of the Kehukee Association[ After Abington’s death there was much discord within the church] The Association in 1772 appointed Elders Jonathan Thomas, John Moore and Lemuel Burkitt to attend them.
The church reorganized on a new constitution and chose Elder Burkitt [1750 – 1806] for their pastor, who was ordained by Elders Thomas and Meglamre, Nov. 1773. [and they had a big revival gradually this enthusiasm subsides as older members died or moved away.] Burkitt made a trip to Kentucky and Tennessee and brought back his excitement with “the great revival.” a hundred and fifty were baptized aged from sixteen to eighty. Brethren raised up in the church have been called to the work of the ministry, viz: Elders Amos Harrell, Robert Moral, M’Allister Vinson, Pitts Kirby, Frederick Futrall, James Rutland and James Vinson. Elder Harrell is now a member and pastor of the church at Connoho. Elder Moral to the church on Meherrin in Southampton, VA. . .The number of members is about two hundred and twenty. Their yearly meeting is holden at Sandy Run, the Saturday before the fourth Sunday in September. And quarterly the same time in December, March and June. And statedly at the same time each month.”

from The Bertie Ledger-Advance, Windsor, NC, September 28, 1972,
In 1806 all churches of the Kehukee Association that were east of the Roanoke River were dismissed by letter to form the Chowan Baptist Association. Thus Bertie was a member of the new organization. Elder Burkitt was largely responsible for this church’s becoming one of the outstanding churches during the later 1700’s and early 1800’s.

The church was called Bertie until 1825 when it became known as Sandy Run. Between 1803 and 1821 Bertie/Sandy Run Church was moved from its first location to Sandy Run on the Northampton – Bertie boundary about a mile from the town of Roxobel.

In 1854 it was moved to its present site in the town of Roxobel.

The year 1883 saw Sandy Run join the West Chowan Association and the Lewiston Church cut off from Sandy Run. In 1898, 24 of the church members were dismissed by letter to form a church at Kelford. Part of the congregation at the Aulander Church were former members at Sandy Run.

On July 24, 1936 the fine wooden church building was struck by lightening and burned to the ground. Work began immediately to replace it with the brick church which now serves the congregation.