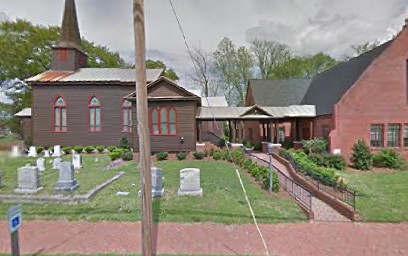 Established at Merry Hill in 1722
the Parish moved to Windsor in 1839.

St. Thomas Episcopal Church is located in historic Windsor NC. We welcome all. We have an active youth program and are involved in many communities as well as global projects. Please join us on Sunday for Christian Education at 10 am and the Eucharist Service at 11 am, led by Rev Joe Cooper.

Direct quote from The Bertie Ledger-Advance, Windsor, NC, September 28, 1972, Section C-6: [found on the Bertie site]
WINDSOR—–The work of the Episcopal Church in Bertie County began in 1722
with the erection of a Church of England Chapel called St. Thomas near what is now Merry Hill, The Chapel was situated one mile from Nicholls Cross Roads on the first high land after crossing Chapel Bridge on the left side of the road to Colerain.
It lasted until around 1831 when it was destroyed by fire.
. . . the Rev. Joseph H. Saunders, residing on Warrenton, began conducting services in Windsor in 1831. .During the years between 1831 and 1840, a house of worship was being built in Windsor at the corner of Gray and Queen Sts. which is the present location. The Rev. Norwood, the Rev. John M. Robertson, and the Rev. Samuel I. Johnson served the people of Windsor.
The Rev. Cheshire preached the first sermon in the present building in 1840 which was built on the property of Lorenzo S. Webb. This was transferred to the church on November 14, 1840 for the sum of $200. On the following day, which was the twenty-second Sunday after Trinity, the church was consecrated and 11 people were confirmed and given communion by Bishop Levi Siliman Ives.
The first Vestry of the church in Windsor was composed of Lorenzo S. Webb, Joseph B.G. Rhoulac, along with William Gray, Charles E.Johnson, James S. Bryan, George Gray and David Outlaw.
St. Thomas’ Windsor, sent delegates for the first time to the Diocesan Convention in 1843, which was held in St. Paul’s, Edenton. They were L.S. Webb, J.C.B. Rhoulac, George Gray and George Holley.
As the communicants have increased from 18 to 178, so has the church grown to its present state of beauty. The original building consisted of only the nave of the present building. The recessed chancel, the narthex, the sacristy and spire have been added. The original windows were oblong and square at the top and made of clear glass.
It is noted by Bishop Ives that the colored people were highly impressed with the ministrations of the church. From 1850 to 1852, during the stay of Rev. Charles Maison, it is noted that there had been services on alternate Sundays in Windsor and Williamston with communion administered once a month and with regular Sunday night services for the colored people. The church had been much improved and a gallery had been built for the colored people but this was later torn down.
In 1851, the vestry room was constructed and described as commodious by the Rev. Charles Maison. A chapel was erected at Woodville during this time and both parishes raised enough money to purchase a rectory. The period of growth ended as the War Between the States started.. . . .