This is the working hypothesis of Zane Perry and myself
– the way we see it as of this moment!! 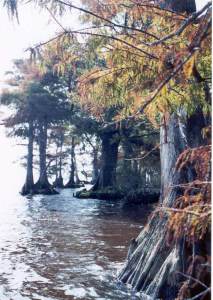 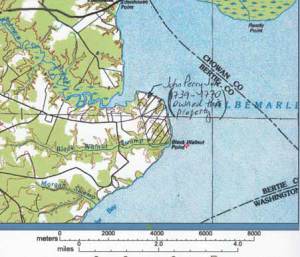 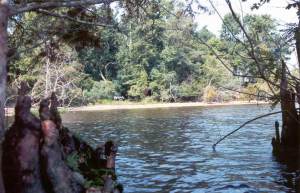 the spot, Black Walnut Point, which John Perry owned in Bertie Co, NC before going to SC in 1770
map shows the location; photos by Zane Perry

This John Perry was married to Sarah. Sarah married second after 1785 John Lowder in SC.

This John Perry was born about 1715, the son of John Perry and his 1st wife Elizabeth ?. (She is listed on some 1720s documents with John Perry in Perquimans County)

1 Nov 2000 – Zane Perry writes – I’m excited to tell you all that this past week I made copies of a 1764 deed that gives positive proof back one more generation in our Perry ancestry!
THE 1764 DEED BETWEEN JOHN PERRY AND THOMAS WRIGHT IS PROOF (that) JOHN PERRY (1690-1760) (is father of) JOHN PERRY (1715-1785).
Mr. Steve Watson of Texas, an excellent Perry researcher, pointed out the 1764 Perquimans County deed that proves the relationship between these two John Perrys.
Please become familiar with the recorded life and times of John Perry, who was born about 1690 in the Upper Parish of Nansemond County, Virginia, and who died in 1760 in Bertie County, North Carolina.
This John Perry was the father of the John Perry who was born around 1715 and who died in 1785 in St. Mark’s Parish of Craven County, South Carolina.
This John Perry was a Planter, and owned 17 slaves at the time of his death in 1760. One of his slaves, named ‘Cesar’, appears to have become the property of John’s son, John Perry (1715-1785).
It is believed that John’s first wife was named Elizabeth, as she is listed on some 1720s documents with John Perry in Perquimans County.
John’s 2nd wife was Sarah Walton, and they married after or about 1725.

[John Perry Sr bought land with Sarah Bond in 1728 and his son John Perry Jun. sold the same land in 1764 and was listed as this John Perry Senr’s son.]

John Perry’s last recorded deed in Bertie Co is dated February 1770, and he signed a petition to build a new Episcopal Church in SC in 1770.

Researcher Zane Perry wrote in a recent e-mail 8 May 2000: “John and Sarah Perry’s son, John Perry Junr., left Bertie County in 1770 and went to Sumter County, SC — which is just downriver from where Benjamin Perry moved by about 20 miles! It seems that John Perry Junr. and Benjamin and James all went to the same area of South Carolina. I don’t know whether you realize it or not, but the Cherokee Indian War of 1760-1761 opened that area up to our NC ancestors, and it is quite possible if not probable that John Jr. and Benjamin fought in that war. John claimed land along the east side of Wateree River, and finally lived along the Pocataligo River in present-day Sumter County. Sumter County did not even exist until 1800, with the area where John lived being called Camden District until 1800. Prior to 1785 it was known as St. Marks Parish, Craven County, SC. I have visited the archives in Sumter, and made copies of all John’s documents there. John left his Will in 1777, and listed his family as: Wife Sarah, sons Thomas Perry (see deed dated 1 Feb 1771 between John Harris and Thomas Perry of Bertie, witnessed by Thomas’ 1st cousin Zadock Perry, and Thomas’ sister Mary Perry Sweatman and her husband Augustine Sweatman), Abraham Perry (my 5Ggrandfather), Abial Perry, John Perry, Silas Perry, Job Perry, and daughters Mary Perry (married to Augustine Sweatman), and Sarah Perry (married to William Cole in Bertie County in 1769). John Perry died in 1785 in St. Mark’s Parish, Craven Co., SC, and his widow Sarah Perry remarried to a man named Lowder.” on May 10 he says another possibility would be Thomas Perry of Isle of Wight Co, VA is John Jr.’s father.

John Perry’s Will, dated 1777, (including mis-spellings):

IN THE NAME OF GOD AMEN I John Perry Senr of South Carolina St. Marks Parish and Cravin County being of Perfect helth mind and Memory Thanks be given unto god for it Calling to mind the Mortality of my Body and knowing that it is A Appointed for all men Once to Die do make and ordain this myLast Will and testament That is to SayPrinciply and first of alle I give and Recomend my Soule to god Almighty who Gave it and my body to the Earth to be buried in a Decent Christian buriale and The Desc Desertion of my Executors Nothing Doubting but at the generale Resurrection I Receove the Same Again by the mighty Power of god and as touching my worldly Estate wherewith it has pleasd god to bless me With in this Life I Do give Devise and Dispose of the same in manner and Form following
— first I give and bequeath to Sarah Perry my Dearly bloved wife for the for the term of hir Life alle this Plantation and tract of Land whereon She now Livs ‚Äì By hir to be possesed with all my household goods and furniture with alle and Singular my Stoc Stock of Cattle hogs and hors kind by hir to be Possesed also One negro man Named Cesar and a Negro woman named Phebe and after hir Death to be Divided According to this my Last W. Wille and Testament
— I give to my Loving Son Abiale Perry and to my Loving Daughtor M. Mary Switman I give alle my Stock of Cattle hogs to be with alle my household goods and firniture to Equally Diveded between then after the Death of my wife
— Excepting all my T Tools Alle so I give to my beloved Sons Job Perry & Silas Perry and to be Equally Divided
— to Job Perry after the Death of my wife alle this Plantatation and tract of Land whereon I now Live Containing three hundred Acres by him to be Possessed
— also I give and bequeath the Said Negro Man Named Cesar after the Death of my wife To be Equally Devided between my two Sons Silas Perry & Job Perry WHOME I CONSTITUTE APPOINT AND ORDAIN MY SOLE EXECUTORS of this my Last Will and testament
— also I give to my Loving Job Perry After the Death of my wife the above Negro woman named Phebe
— also I‚ÄîTo my Loving Son Abraham Perry one Shilling Starling
— also I give to Loving Son Thomas Perry one Shilling Starling
— also I give to my Loving Son John Perry one One Shilling Sterling
— also I give to my Loving Daughter Sarah Cole one Shilling Sterling
— also I give and bequeath to my beloved Nephew Abiale Draughn a track of Land One hundred Acres Lying on the north Side of the So. Fork of Black River it being part part of a tract of two hundred Acres Land out to the sd. John Perry senr. Buting and bounding as follows South Cost and part of the Same tract Nort. West on Land Laid out to Nathl. Pace and all other Sides bounded by Land Laid out to Silas Perry
— and I Do hereby Disallow Revoke and Disannulle alle and Every other form or Wills testaments Legices bequeaths And Excutors by me in any ways before named Willed and bequeathed ratifying this and no oth. to be my Last will and testament in witness whereof I have Set my hand and Seal This twentyeth Day of October in the year of our Lord one thousand Seven hundred and Seventy Seven
——————- Signed Sealed and Pronounced by the Said John Perry as his Last wille and testament in the Presents of us who have hereunto Set out Hands ———–

Recorded in Will Book A Page 18 Recorded February 15th 1802
Wm Taylor, Ordy Bundle 78 Pkge 8‚Äù
~ ~ ~
(Note: Sumter District did not exist until 1800, and shortly thereafter a fire burned many of the original documents that had been contained in Sumter for the earlier Craven County, Camden District, Claremont County and Salem County time periods. This Will appears to have been a recopy recorded on February 15th, 1802  based upon an earlier settlement of John Perry’s estate in 1785.)
contributed for use on this site by Zane Perry

To all people to whom these presents shall come, We, John Lowder and my wife
Sarah Lowder, do send Greeting. Know ye that we, the said John Lowder and Sarah
Lowder of the County of Claremont and State of South Carolina, for and in consideration of the love, good will, and affection which we have and do bear towards our well beloved son, Job Perry of the County and State aforesaid, planter, have given and granted, and by these presents do freely give and grant unto the said Job Perry into his actual possession for the use of him, the said Job Perry his heirs executors or administrators or assigns forever, all and singular three hundred acres of land, with plantations and houses and orchards, and all household furniture and working tools, and one negro man named Cesar, and all stock cattle and hogs, and one horse, and nothing of our present interest to be excepted, only one naked bed and two pewter dishes, and our support during the mortal life of my beloved wife Sarah Lowder and myself John Lowder from Job Perry his heirs or assigns, of which before the signing of these presents we have delivered him the said Job Perry all the said particulars before mentioned, to have and to hold all the said premises before mentioned or thereunto belonging to the said Job Perry his heirs executors administrators or assigns from hencesforth as his or their property, absolutely without any manner of condition. In Witness whereof we have hereunto put our hands and seals this twenty sixth day of May one thousand seven hundred and ninety six, and of the independence of the United States of America the twentieth~. John Lowder seal
Sarah (her / mark) Lowder seal
Signed, sealed, and delivered in the presence of
Solomon Thomson
Elijah Price Margaret (her + mark) Price

South Carolina}
Claremont County} Personally appeared Solomon Thomson, being duly sworn on the
Holy Evangelists of Almighty God, saith that he saw John Lowder and Sarah Lowder
sign, seal, and deliver the within written deed of gift to Job Perry, he also saw Elijah Price and Margaret Price subscribe their names as Witnesses at the same time ‚Äì
Solomon Thomson
Sworn to before me this 28th day of May 1796. Jesse Nettles J.Q.
Originally recorded 18th July 1797 now 8th March 1803‚Äù
~~~~~

(Note: Sumter did not exist until 1800, and shortly thereafter a fire burned many
of the documents that had been contained in Sumter for the earlier Craven County,
Camden District, Claremont County and Salem County time periods. This deed appears to have been a recopy done on March 8th, 1803 ‚Äì based upon evidence of an earlier deed as attested by Solomon Thomson in 1796.) ZDP