William Godwin was a son of Col. Thomas Godwin II who left legacies to each of his six sons and three daughters.
William received 200 acres in Isle of Wight County, Va.

William Godwin first appears in the Isle of Wight records in 1655 when Humphrey Clark leaves him a cow. Thomas Griffen in his will dated 8 Nov, 1669 refers to him as my brother. [He was married to Elizabeth’s sister Ann] William Godwin is mentioned as neighbor to John Whitley on Feb 21, 1670 and was named as appraiser for several estates.
William Godwin wrote his will 21 Nov, 1710 and it was recorded 26 Sept 1720 in Isle of Wight Co, VA.
names his sons William, John, and Joseph Godwin. his daughters Sarah G….., ……. Bridger, Mary Whitehead, Martha Cotton, and daughter Jane. Wife Elizabeth, Extr.
Wit: William Pope, John Whitley, James Edwards. 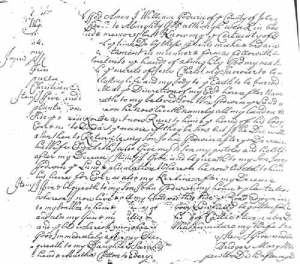 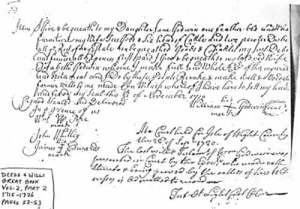 Elizabeth Wright daughter of Thomas Wright and his wife Elizabeth [Gibbs] was born ca 1650 in Isle of Wight County, VA. In 1666 she married William Godwin.

Isles of Wight Co Deed Bk page 295 – On the 1st day of February 1749 between William Godwin of Suffolk Parish in the County of Nansemond of the one part and Thomas Bullock of Newport Parish of the County of Isle of Wight of the other part. . .for 22 pound . . . a certain tract of parcel of Land lying and being in Newport Parish in the County of Isle of Wight est 100 acres + or – . . .being the Plantation whereon this William formerly lived bounding on the lands of Robert Driver, William Driver, Barnaby Godwin, and William Bullock the same Part of a Patent formerly granted to Godfry Hunt for six Hundred acres and by the sd Hunt conveyed to Henry Reves? of Rappahanock who did by Deed of Bargain of Sale bearing Date the 19th Day of December 1688 convey and will two Hundred Acres of the said land to Thomas Godwin of Chuckachuck in Nansemond and the sd Thomas Godwin decd by his last Will and Testament give and bequeath the sd two hundred Acres unto his Son William Godwin, father of the aforesaid William Party to these presents — who did by his last Will and Testament bequeath the same to his two sons William and Barnaby Godwin which land has been divided etc . . .

Estate records of William Godwin
Martha Godwin was apptd gdn of the orphan Silvia Godwin, 29 Apr 1756.
Inventory of property left the said Silvia in her father’s will, 28 July 1755 by her guardian.
Account of sale 29 July 1756 by John Brickell, exr. Buyers were: Martha Godwin, Matthias Brickell, Harmon Hollemon, Edmund Bird and Edward Carter, and this record mentions money settled with the children of the dec’d and their gdn.
Acct. of the estate belonging to the orphan Martha Godwin with John Brickell her gdn from June 1756 to July 1759, mentioning the hiring out of Negro Will.
Samuel Hollaman was apptd. gdn. of the orphans Willis and Courtney Godwin 29 July 1757

Deed Book I-11 William [x] Clarke planter in Bertie Co to Samuel Hollamon planter of same 11 Mar 1757. 10 pounds NC. All my title in the estate of William Godwin dec’d being the legacy of my wife Julian, daughter of sd. Godwin as by his will. Wit: Moses Sumner, Micajah Lancaster. Oct Ct 1757 CC Benjn Wynns