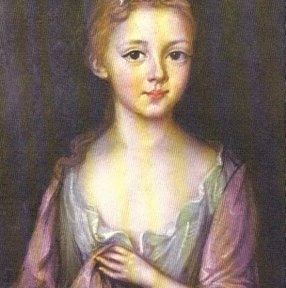 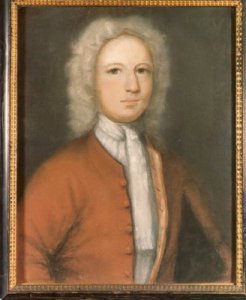 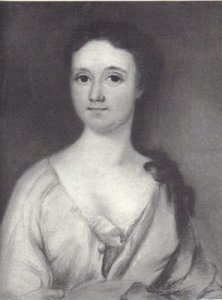 Colonel John Moore (1686-1749)
Colonel John Moore, whose portrait is signed and dated 1725, was born in St. Thomas Parish, South Carolina, the son of John Moore (c. 1659-1732) and Rebecca Axtell. John Moore, the father, was Secretary of the Province of South Carolina: but about 1695/6, with his family, he moved to Philadelphia. The son went on to New York City, where he attained distinction as an alderman; a member of the Provincial Council; and of the legislature. He was also colonel of the New York City Regiment of Foot. He was a vestryman and warden of Trinity Church and is believed to be the first person buried in the graveyard of that Church.

Mrs. John Moore (1692-1782)
Mrs. John Moore was born Frances Lambert. She was of Huguenot ancestry and came to this country as a small child to escape persecution. She had many children besides the two whose pastels were drawn by Henrietta Johnston, and she lived to a good old age.
Mrs. Samuel Schwartz, the owner of this portrait, has given the following description:Mrs. John Moore (Frances Lambert), has dark brown hair, and brown eyes. Her dress is yellow with orange highlights. The scarf, she wears over her left arm (on the right side of the picture) is a lavender taupe.

“Col. John Moore, a leading merchant in the early days of New York City.”
John Moore 11 Aug 1686 SC – 29 Oct 1749 NYC age 64
Alderman, member of Legislature, Col of Regiment, Member of Provincial Council NY
will date 4 Sept 1748, buried in his vault in Trinity Churchyard
Married 1714 Frances Lambert April 1692 NYC – 17 March 1782 NYC.
She was of Huguenot descent, brought to America in infancy in consequence of the bloody persecutions of the Protestants in France. She was ‘most accomplished in looks and manners’ as reported by John Moore, Esq.
[Records of the French Church indicate that her maternal granduncle, Gabriel Minveille, was in New York by 1691. Her father, Daniel (or Denis-a possible mistake in transcription) Lambert died in Sept of 1691. Frances was born posthumously to her father’s death, in April 1692. Curiously, Frances’s baptism is not recorded in the French Church records, but all indications are she was born in New York. The Barberie connection mentioned in John Moore’s memoirs occurs when her widowed mother, Frances Brinkman Lambert married John Barberie in 1694. Terri Bradshaw O’Neill ]

He was Alderman of the City, Member of the Colonial and King’s Council, Prov. of New York. John Moore II was Col. commanding his Majesty’s New York City Regiment of Foot. He was 1715 to 1728 Vestryman and Warden of Trinity Church, New York City.

The family seat on the Hudson was acquired by him partly by purchase from Charles Congreve, Esq., and partly by patent;
his residence known as White Hall in later years was at Moore and Front Streets, New York City.
Note: This was NOT the home built before 1661 for the Hon. Peter Stuyvesant, last of the Dutch Governors. That house called Whitehall was near the Fort and burned to the ground ca 1719.

He left a large estate in the province of New York and City of Philadelphia, Penn. On Sept 24, 1748, he willed his wife, for her life, his estate in New York, excepting the family seat on the Hudson, which he devised to his son Stephen. The Philadelphia estate he left to his son, John, but that son, died before his father. A codicil gave that part of his estate to his wife for life also.

They are both buried in the Trinity vault, upon which his name was inscribed in after years by his grandson, John Moore, Esq., genealogist of New York City. 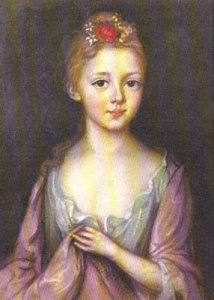 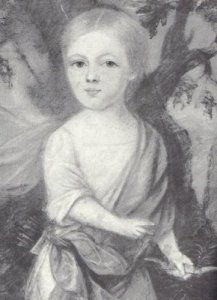 Thomas Moore (fl. 1725)
The Portrait of Bishop Moore’s Father, as a Child.
Several affidavits testify to the fact that this is the pastel of little Thomas Moore, son of Colonel John Moore and his wife, Frances Lambert Moore. Thomas Moore became the father of Bishop Moore, the Right Reverend Richard Channing Moore, D.D., (1782-1841), Bishop of Virginia (1814-1841).
This pastel of Thomas Moore was given by Alexander W. Weddell to The Virginia Museum of Fine Arts, Richmond, Virginia

Note: – in 1664 King Charles II granted to his brother, the Duke of York, (afterwards James II), all the territory from the Connecticut River to the Delaware. The English demanded the surrender of New Amsterdam, now part of New York City, to which demand Governor Stuyvesant sent a defiant answer, but the municipal authorities being indisposed to aid him, on Sept. 9, 1664, a treaty was signed at his mansion, ‘on his farm or bowery.’ (the Bowery survives but the mansion was destroyed by fire ca 1719)

the above pictures are from David Jeffreys’ Blog with permission – he in turn found them in
Henrietta Johnston of Charles Town, South Carolina  America’s First Pastellist by Margaret Simons Middleton, p. 47. University of South Carolina Press, 1966. Out of print.

Children of Thomas Moore 1722-1784 and Elizabeth Channing of White Hall, NYC:
“.. Esq., M.A. (Westminster) of White Hall, etc., Vestryman of Trinity Church, 1750-62, 1779-84, m. in 1744 Elizabeth, (1728-1805), daughter of William Channing, Esq., of Dorchester, England, Agent of British Navy at New York, and Ann Bowne, his wife, of Middleton, N.J. (Moore, Brittanica, Henshaw supra). Note.-Thomas Moore, Esq., though an uncompromising Tory like all of his family, suffered much from the depredations of British troops at Moore’s Folly during the Revolutionary War. Though Gen. Sir Henry Clinton caused apology and restitution to be made, he retired to New York and became connected with His Majesty’s Customs Department, his brother Charles [sic] moving to Mount Tirzah, N.C. He died at New London, Conn.” 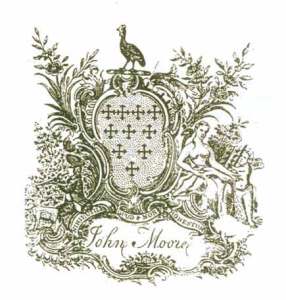 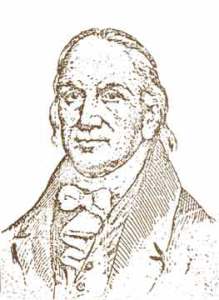 John Moore, Esq – the author of the memoirs
right: his book plate