executor for brother John in Feb 1763 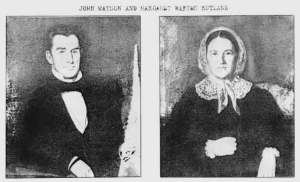 Will of Thomas Rutland of NH Co NC 5 April 1793 Sept Ct 1793
– to my wife Abigal Rutland the plantation whereon I now live during her life and lend her too the residue of my estate real and personal. (Rose excepted) as long as she will keep my two daughters, whenever she refuses to support them in thein non-age and unmarried all my estate both real and personal is to be taken from her except what is lent her for life
– to my daughters Elizabeth Rutland Bryan and Mary Rutland Bryan all my estate both real and personal
. .. . .
EX: Robert Lawrence and Josiah Outland
WIT: Henry Aug. Wood, Sion Rutland

more notes from David B Gammon:

Halifax County Deed Book 15, page 145
17 (no month), 1783
Benjamin Foreman and wife Amelia of Halifax Co. to Whitmell Hill of Halifax Co.
For 450 pounds, Foreman’s Mill, with one acre of land on each side of Kehukee Swamp.
(her first husband Moses Horn died 1781.)

Benjamin consistently shows up in the Halifax Tax Lists in the 1780’s through 1802. (no tax lists after that)

(interesting that the land was in Bertie, yet deed was in Halifax Co.)

Will of Henry L. Irwin
Halifax County Will Book 3, page 544
15 March 1813, proved November Court 1813
Land that fell to me from my father is to be sold and money arising I give to Mrs. Amelia Foreman and my wife. Residue of my estate to my wife Dolly Irwin.
No executor named.
Witnessed by Sarah Gary

(This will is recorded again in Will Book 3, page 711. Identical will, but it includes reference to a suit by Dolly Harrison vs. the heirs of Henry L. Irwin, September Court 1824.)

Will of Amelia Foreman
Halifax County Will Book 3, page 704
24 Aug. 1820, proved August Court 1824
Son Moses Horn – all the property I own, and if he dies without issue I give:
$100 and the rest of my estate to Benjamin Jones to settle my estate, also $250 to William Hyman the Baptist preacher.
Witnessed by Blount Joyner and Elisabeth Joyner
Executor – Benjamin Jones
Codicil – March 14, 1824 – son Moses Horn is to sell my Negro man Jerry here, and he is not to be taken from this neighborhood. To Rutha Wilkins – $20 for her attention to me in this illness.
Codicil witnessed by George N. Steptoe

Will of Drusilla Rutland just who is she?
Halifax County Will Book 4, page 77
18 Jan 1831, proved Nov. Ct 1831
of the Town of Halifax
Cousin Dolly Hawkins – portrait and feather bed for life, reversion of feather bed to Lucy D. Rutland, daughter of Johnson and Mary Rutland.
If said Lucy is deceased, this bed will gall to Lucy Harrell or some of her family.

Died in Northampton County, on the day of the election, James Harrison, Esq., clerk of the county court. No date given. (Raleigh Register, 22 August 1823.)

Halifax Co. Deed Book 24, page 185
Nov. 28, 1817
Division of lands owned by Benjamin Foreman, deceased, and now occupied by his widow Amelia Foreman, who has a life estate in said lands. Land divided into two shares of 219 ¬Ω acres each, one share to James C. Harrison in right of his wife, the other share to Whitmel Cotton in right of his wife Polly.

Halifax County Deed Book 24, page 152
Dec. 6, 1817
James C. Harrison and wife Dolly to Thomas Burgess, all of Halifax Town.
For $20,000, 372 acres that had been devised to said Dolly by her late father Benjamin Foreman on the Roanoke River, also 219 ¬Ω acres that descended to the said Dolly from her sister Amelia Foreman.

(there are more deeds that prove this marriage, but these are the earliest)

I am speculating that Polly Foreman Cotton was not named in her father’s will because she was already married. However, other records prove the three children of Benjamin Foreman – Mary, Dolly, and Amelia. The latter died unmarried and without issue.

There is a will for James C. Harrison in Northampton – I have these on microfilm and will try to read it tonight.

Chest, trunk, and clothing to my cousin Lucy Harrell and her daughter Mary Rutland.
Ececutor – none
Witnessed by Phebe Merritt

Will of Dolly Hawkins
Halifax County Will Book 4, page 98
November 1831, proved May Court 1833
Sister Mrs. Polly Cotton – half my river land and Kehuky tract, Negroes, watch, clothing, spoons.
Half-brother Moses Horn – remaining half of my river and Kehuky lands.
To Ann E. Peete and Mary T. Peete, daughters of Dr. Thomas Peete – Negro, but I reserve the use of the Negro to their mother Mrs. Peete for live.
To my friend Thomas Burges – Negroes and spoons.
My executor is to sell my houses and lots in the town of Halifax as he thinks proper.
Residue of money after payment of debts is for my said sister and half-brother.
Executor – Thomas Burgres
Witnessed by Martin Read, James L. Simmons
Codicil dated 29 April 1833
Revokes legacy to Mrs. Peete. My portrait I give to my sister Polly Cotton.
Codicil dated May 6, 1833
To Dr. Read – $20 for his attention to my cousin Drusilla Rutland. To my valued friend Rebecca Hart – $500.

(This will give you a little more on these Foreman sisters. From the wording of Mary Foreman Cotton’s will, it appears her half-brother Moses Horn died without issue.)
above notes contributed by David B Gammon

Will of James Moore of NH Co NC 26 July 1800 – Sept Ct 1800 NH Co NC
– lend my daughter Silvy Oneall 1 negro and increase and to all sd. daughter’s children at daughter’s death
– to daughter Winneyfred Jordan the negro she has already received as by bill of sale
– to daughters Polley Bridgers and Penelope Moore negroes each
– land bought of William Bell to be sold at discretion of my EXTRs
– unto my loving wife Rebekah Moore 200 acres in Wilks Co. TN
– to my 2 sons James and Alfred Moore all the remaining part of my land in the State of TN it being the same I bought of Col. Mufree
– reminder of my property to go to my wife Rebekah and children sd. James Alfred and Penelope Moore
– EXTRS: my wife, my brother Moses Moore, Col Hardy Murfree, Thomas Wynns, William Jordan, and John Bridgers
– Wit: Jacob Parker, Isaac Parker, Joseph Pitt
Gen. Abstracts of Wills NH Co NC 1759 – 1808 by Margaret M Hofmann

I think the following will is of Moses, son of Moses Moore and Mary [Polly] Rutland

these two items appear to be about a different set of Moses Moore.

This is my working hypothesis – the way I see it as of this moment!!
based on Original research of my own and also by Dorothy Crawford

Will of William Rutland of NH Co 3 Sept 1790 March Ct 1795
-lend wife Sarah Rutland the Land and plantation whereon I now live during her widowhood
-to son Lemuel Rutland land where I now live on the North side of Cross Branch
-to son Miles Rutland the reminder of the land where I now live on the South side of Cross Branch
-give wife Sarah and daughter Mary bed and furniture
-give wife Sarah the reminder of my beds and furniture and my stock of sheep to be equally divided between my 5 youngest children: Sarah, Miles, Lemuel, Rebecca and Mahala Rutland
-to son Abednigo Rutland 20 pounds specie
– son James Rutland, Shadrack Rutland, Mesheck Rutland, William Rutland and Randolph Rutland and daughter Elizabeth Grant the sum of fove shillings each
– reminder of my live stock to be sold and the money to go to my three youngest daughters: Sarah, Rebecca and Mahala
EXS: my son James and William Grant
WITS: Wilson Rutland, Lawrence Daughtrey, Joseph Horne
note– June Ct 1795 James Rutland came into Court and qualified as Extr to the above will of William Rutland decd — abstact by Margaret M Hofmann

9. Sarah Rutland ca 1765 –
her sister Rebecca left her 1/2 her estate 1805
married bef 1805 Bruise
my stock of sheep to be equally divided between my 5 youngest children: Sarah, Miles, Lemuel, Rebecca and Mahala Rutland

10. Miles Rutland ca 1767 –
his sister Rebecca left him 1/2 her estate 1805
to son Miles Rutland the reminder of the land where I now live on the South side of Cross Branc

12. Rebecca Rutland ca 1773 – 1805 NH Co
Rebecca Rutland Nuncupative will June Ct 1805 NH Co, NC
-whole estate go to and be divided between her sister Sally Bruise and her brother Miles Ruttland free and clear of the rest of her Relatives, that she did not want ANY of the rest to have A Farthing
/s/ Winnefred Bynum 17 April 1805 before Henry Cotten,JP
Probate indicates James Rutland, William Rutland, Meshack Rutland and Abednigo Ruttland entered a Caveat but a jury decided that this WAS the will of Rebecca and administration was granted to William Grant

Josiah Battle 1817-1820 Will, probate, etc.
(Charles Vann Papers – State Department of Archives and History)In the name of God ame I Josiah Battle of Hertford County of North Carolina being sick and weak in body but of sound mind and memory —
– I leave the remainder of my estate to be eaquely Divided between my sister Sarah Ruttling and her daughters Marthea Ruttlin & Nancey Ruttlin
and Betsey Everit wife of Samuel Everit
and William Battle and Marry Battle, Nancy Battle and Abereham R. Battle, Sallea Battle and Martha Battle to them and theire heaires forever,
– EX: friends Isaac Carter and Samuell Everit
I have set my hand and seal this eight day of december one thousand eight hundred seventeen
Josiah Battle {seal}
WIT: James Murphy James Wells }
No Carolina Hertford County } February Court 1818
This will was in open Court proved by the oath of James Wells a Witness and ordered to be recorded at the same time Saml Everitt executor therein appointed was duly qualified and obtained Letters Testamentary on his Estate Test Jos. F. Dickenson Clk

I Certify that the foregoing is a copy from the Record of Hertford County
Test Jos F. Dickinson Clk
By G Gordon Dep Clk Be it known, that we the undersigned Legatees of Josiah Battle deceased, have this day received, from Samuel Everett Executor of the said deceased, each of us, respectively the Sum of Seventy one dollars and Sixteen Cents in full of the Legacy bequeathed to us severally & respectively by the Last Will & Testament of the said Josiah Battle: and we do hereby acquit exonerate and discharge the said Samuel Everett, Executor as aforesaid, of and from all claims and demands which we have or ever had against him by reason of the Legacy bequeathed to us as aforesaid, In witness whereof we have heeunto set our hands & seals this ’28 day of June 1820
Martha Rutland {seal}
Sarah her(x)mark Rutland for self {seal}
Isaac Carter as guardain for Nancy Rutland {seal}